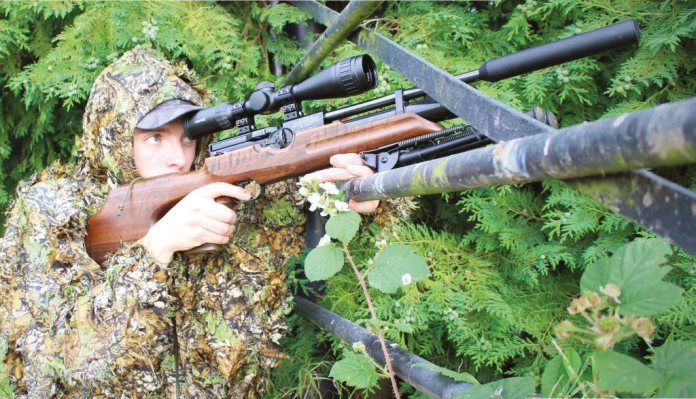 I have carried out rabbit control over a wide array of properties, including car parks, farmers’ fields, a golf course and most commonly, private gardens. I was at work one day, at Jayne’s Fishing Tackle and Gun Shop, when a lady walked in whom I had not seen for a while. I have permission to shoot over her farm/pheasant shoot. While I visit the property on a fairly regular basis, I rarely see anyone. I just text her when I am planning on shooting and go. She often works away and, when she’s home, there’s no real reason for me to see her, as long as she knows I’m shooting on the land, we don’t meet. On this rare occasion, it was nice to see her, and she informed me that she had noticed an increase of rabbits on her garden, digging up the grass and creating holes in the banks of her drive way. She asked me if I would be able to go over and take a look with the air gun. Of course, I said, it would be no problem and arranged to head over the following day. Previously, I only had permission to shoot over the fields; so, the opportunity to shoot in a different area was appealing. This, and the fact that I could hopefully use my skills in a place where she would really notice the difference.

The next day, I made my way over and she showed me the damage that the bunnies had made. The lawn and garden were a bit of a mess, but I was optimistic that I could put a few in the bag in an attempt to slow the digging. My rifle of choice for this task was the HW100KT matched with a Hawke Airmax 4-12x40 and Sports Match mounts. This is a rig that I am really starting to get some serious time with and was accountable for many successful outings. This is partially down to the handy 14-shot magazine, which is a true bonus when some fast fire action is needed.

Admittedly, I have never needed all 14-shots in one go, but safe in the knowledge I will rarely need to reload the mag. I had fitted a 9-15” Harris bipod. This really helps when shooting rabbits from the prone position. I would have preferred my Spartan Javelin, but at the time I had no adapter fitted, so had to make do. Knowing that these rabbits hadn’t been shot at before, I felt confident that they wouldn’t be too skittish. I still wanted to make a good impression though, as the pressure was on, so I put on my camo leaf suit, just in case!

I began by positioning myself up on a bank that had been made to surround the gravel drive way. There was widespread signs of rabbit damage and I wanted to hit them where it was worst. The bipod was a great help. It meant that I could leave the gun ready and if one showed, I could shoulder it and be ready to shoot without any excessive movement. Chambered, cocked and locked, I was ready and would waste little time when I had to shoot.

I waited for a good 40 minutes before anything came to life and there wasn’t the number of rabbits that I was hoping for. I got glimpses of a couple as they ran in and out of some undergrowth on the other side of the drive, but no shot was possible. I thought it may be a job more suited to the Nite-Site. Just as I began to think about a change of tactics and moving my position, some movement caught my eye. There was some shrubbery in the direction I was facing, about 27 yards from me. There was clear activity; a lack of grass around the plants and droppings were abundant.

The rabbit appeared, disappeared and reappeared from behind the shrub and I realised there must be a warren under the bush. There was no way a rabbit would have remained there all this time. It sat on the edge of cover, fortunately showing just enough for me to thread a pellet through to the head. It didn’t know what hit it and jumped and began to throw itself franticly around the drive, kicking the now red stained gravel all over the place. Somehow, I doubted the land owner would mind. The HW’s silencer worked efficiently and I was sure nothing in the area would have heard it. I sat tight. Thankfully, a buck hopped out just to the right of the last rabbit and didn’t seem nervous that it was lying dead in front of him. It hopped around, looking for a tasty patch of untouched grass and began to nibble away. It had moved slightly further out, so I double checked the distance with the Hawke LRF400. At only 35 yards, very little hold over was required, it settled down and sat still.

I held the crosshairs just above the back of the eye (rabbits’ brains are very small and through experience I have learned that just shooting anywhere at the head doesn’t cut it). They can easily be wounded if hit in the jaw or even the eye and condemned to die a slow death. I make every effort to avoid this and so pin-point precision is a must. The sound of the pellet striking the skull was louder than the pop of the muzzle and there were two dead rabbits lying just yards away from one other. A relief but not the bag I was hoping for. Some more time passed and with back ache becoming more than a mild distraction, a walk was needed. I rose up (as silently as I could) leaving the bunnies where they lay and headed over to some foot-high cover crop just next to the garden, where I knew some of them were coming from.

Birds in then hand

This time of year, there are always pigeons roosting on the telegraph wires which stand between me and the rabbiting spot I was heading to. With this in mind, I slowly began to sneak around the corner, to see if there were any sat up there on this occasion. There were seven birds, all in range. Using my camo suit, I tried to blend into the conifer hedge behind and got myself into a position I was happy with. The gate was a great rest, setting the bipod on the metal so as not to scratch my lovely walnut stock. Just as I felt ready for the shot, something spooked the birds and they all flew in different directions. Very frustrating but that’s just how it goes sometimes. I got myself up and gently moved on to the maize cover crop that was also being damaged by the rabbits.

My plan was to approach stealthily, my bright blue trainers may not be camouflage but they sure are quiet. Not my first choice in footwear, as this self-inflicted problem was caused by my usual Ridgeline boots being left outside and I am ashamed to say this wasn’t the first time this had happened. At least it was a dry day!! I aimed to set myself up at the far, high end of the crop which would give me a good view on activity below. The day was fairly calm and set amongst the low crop there was little to no wind, so I was happy taking shots out to 55 yards.

My Hawke range finder would be invaluable because range estimation under these circumstances would be next to impossible for me, especially at the longer distances and laid it on the ground in easy reach! I had a great view down the neatly planted rows and I knew it was only a matter of time before another opportunity arose. Sure enough, my patience paid off once more, as an adult rabbit made its way through the greenery. The laser informed me that it was well within range at 43 yards. A slight amount of holdover was given before the pellet was sent on its mission. The shot impacted a little lower in the head than I expected but still hit nice and clean. I waited for some time and another couple more fell to the HW100 (all at similar ranges).

I was over the moon to report back to the land owner that in total there were five less rabbits to be causing damage to her land. A steady start to getting on top of the problem but much more to do. She was happy with the result and very grateful to take the rabbits off my hands. They were hers after all and if a bird in the hand is worth two in the bush, surely five in the pot must be so much better than in your herbaceous border?