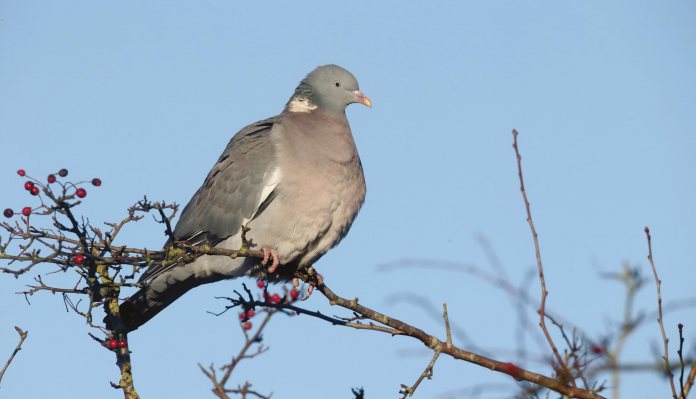 Over the Christmas break I had the opportunity to have a day’s hunting on a one of my permissions. I got up at first light to see if I could shoot some unsuspecting early morning woodies in their favourite willow tree. My kit consisted of my Air Arms S400 with Hawke Air Max 4-12x44, range finder, my comfy Zamberlan walking boots and some very warm clothes. I planned to spot and stalk on foot and every-so-often, stop under promising-looking trees to wait a while.

With all the gear thrown in the car I set off. It was a bitterly cold morning and the frost from days before had built up on the fields and left a canvas of white. Luckily for me, this permission is less than a mile from my door step and within 5 minutes I was there. Stepping out of the car, I could see the tree which held the biggest possibility of a pigeon in the distance, I was almost sure I could see the silhouette of a woodie on a branch. One advantage of winter shooting is the lack of leaf cover, the disadvantage is obviously the temperature and I tried to unlock and open the icy gate as quietly as I could.

Another advantage of these really cold days is that you have one of the best wind indicators possible. Whether pigeon shooting or on the Field Target circuit, using breath gives an excellent idea of wind-speed and direction. People often associate a good shot with being a clean shot at range and the factor of wind is often overlooked. In fact, some of my most memorable shots have been sub 30 yards! Easy under normal circumstances but throw in a 30 MPH cross wind and it’s a different game, entirely!

An observation on range

With the increasingly high standard of rifles produced today, what is considered a ‘long range’ shot seems to be getting further and further away. On paper and on a perfectly still day, my S400 is capable of 80 yard accuracy. I have grouped at this range many a time to gain a greater understanding of wind effect and ballistics. Certainly an interesting and informative exercise in perfect conditions. However, the reality and ethics of hunting are far different and at the end of the day it’s the shooter that makes the shot and we all differ in our abilities. So I would always say keep it sensible as we owe a modicum of respect to our quarry to despatch it as humanely as possible!

Jumping back in the car, I was able to get closer to the ‘sitty tree’. The birds on this field are used to vehicles coming and going throughout the day, so they didn’t bat an eyelid at my little Fiat Panda rolling down the track. Now I was on the land, I could see right through the tree and what I thought was a pigeon from the gate was actually a branch, which had deceived me. I was glad to see that just above that, actually sat a woodie. I could only just make out its head from the position I was in but that was all I needed. I knew the range of this shot as I had taken birds in similar positions before- 35 yards! With the incline taken into account, half Mil-Dot holdover was needed. One of the great advantages of shooting out of a vehicle is that all your kit is within easy reach (even easier reach in a Panda). There was no fumbling for pellets when it was time to cock the S400.

Another advantage of car shooting (and the main reason I like shooting out of one) is that there is always a solid rest. With the window wound down there’s not much else that is steadier. Our whole family loves the Fiat Panda. It’s small, light and nips around anywhere but I would have to say it is far from the ideal shooting vehicle. I smile now but I have to say, using the limited space efficiently, when shooting has had its moments and has taken some practice.

With all the odds in my favour, sat comfortably, warm and rock solid, I took the shot and the bird dropped with minimal drama. I got out of the car and walked to retrieve it with the rifle over my shoulder in case another opportunity presented itself. The frosted grass was crunching under my boots as I walked and the sun had just started to peep over the hedge. The first golden glow was transforming the fields into a picture. The bird had dropped clean into an open bit of ground, so finding it was easy. I was thankful it hadn’t dropped into the icy stream today!

Once retrieved, I dropped the pigeon down to pick up later. A short walk around the field was in order, as there is often a wandering squirrel or bunny on the outskirts of the wood. I wandered through the open fields, enjoying the frost spraying off the toes of my boots as I walked. I stopped now and then to look and listen for pigeons, squirrels or crows. Something I always do when out stalking is to asses what natural cover there is available and how to use it to my advantage. This may sound simple and maybe a little obvious but the amount of people I see, walking across the middle of the field is surprising.

One of the best forms of cover in fields is the hedgerow. I often find myself subconsciously hugging the hedge line as I walk. This means that I am not silhouetted against the sky if a rabbit is looking in my direction, allowing me to get a few yards closer, which can be the difference between success and failure. Another thing I use when rabbit stalking are tufts of grass and natural mounds in the earth. Once a rabbit has been spotted, I’ll then look for the best direction to stalk from, even if that means retreating a distance. If there is not much cover at all, then I have to “make the best of a bad job”, as my dad would say! Stalking isn’t always easy and if it were, there would be no challenge or skill but practice (and a shed-load of patience) makes perfect. I remember my days of frustration spooking many times more rabbits than I ever shot when first started ambling round fields. Today, it seemed that it was just too cold for the bunnies. Either that or they are still way cuter than me and saw me first!

I carried on the stalk and just in the distance I could see a slight shade of grey and movement on the branches of a holly bush. Pigeons only seem to land in holly when it is bearing fruit and there has been a distinct lack of berries this year. From last year I noted that all of the berries were gone by Christmas but there were still a few left on this holly. As the opportunity was there, I wanted to take full advantage. Between me and the pigeon was 100 or so yards of field. 50 yards to my left was a large sprawling bushy tree and I knew I had to take my shot from there.

I edged my way over until my view of the pigeon was obstructed. Hopefully, that meant that it could not see me either! From this position, the stalk was pretty straightforward. Keeping my wits about me I closed the distance until the pigeon was at a manageable 50 yards. I got down and crawled round the bush. The bird was perfectly visible. I made sure of the distance using the range finder. At 50 yards 2 Mil-Dots were needed, my breath was still visible and rose gently before disappearing - all around was motionless. I needed to hold directly above the bird. The silenced S400 sent the pellet true and it stuck it between the shoulder blades. The impact seemed louder than the shot and it fell immediately, as the pellet entered the heart and lungs. I lay there still and watched. I knew the pigeon was dead; there was no need to rush and retrieve it.

I often wait after a shot because sometimes other birds come straight in, especially when decoying over cut crop but it’s worth doing every time. My decision to lie in the cold grass for a few more minutes was rewarded, as another pigeon swooped in and started chomping away. The shot was virtually the same, two Mil and no wind. Feeling confident I opted for a head shot and once again the bird dropped on the spot. That was enough for this cold position and I broke cover. Upon retrieval, I could see both shots were bang on and as usual, the S400 did the job.

When I’m out in the field with a brace or more of woodies, I tend to pluck them there and then. This just saves on mess when I get home and speeds the breasting process. With three birds in the bag and some very cold toes I was happy to call it a day.