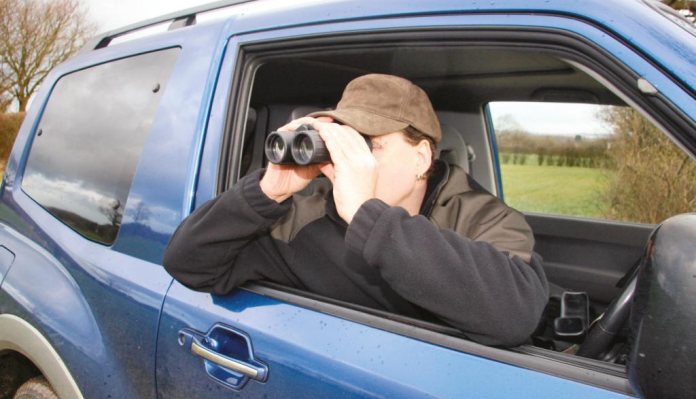 Of all hunting disciplines, getting permission to shoot on a parcel of land using an air rifl e is one of the most diffi cult obstacles to overcome in your quest to pit your wits against the many pest species that are deemed suitable for the 12ft lb legal limit airgun. Granted, as I’ve often said in past articles, the non-ticket waving airgun hunter can operate in areas that fi rearms and shotgun shooters can’t. But, whilst any farmer knows the effectiveness of those guns, few are as understanding when it comes to a gun that they personally remember was something to shoot rats or knock tin cans over with!

But eventually you’ll have secured what at times will have seemed the unattainable; a place you can legally shoot. However, the next stage is one of the most important any hunter stepping on new land faces; simply put, you need to fi nd the critters. Equally importantly, you need to stay legal and that means fully acquainting yourself with your new airgun haven. In other words, the essential job of becoming fully accustomed with the boundaries of your new permission and, if any are present, footpaths, rights of way, bridal paths etc.

Although your host will tell you the areas that they’ve had problems with pests in the past, often they can unintentionally be quite ‘matter of fact’ in explaining where their land ends and a neighbour’s on all relevant sides begins. So, don’t be afraid to ask for specifi cs. Pin them down to which actual fence lines or hedgerows they mean, rather than just ‘assuming’ it’s hopefully the furthest in the distance. So, armed with this knowledge, time now to put in the groundwork, which entails getting out and looking around for yourself. Only then can you fi ll in the details of prime locations you’re likely to fi nd or have noticed certain areas quarry frequenting and/or they’re permanently in residence.

After a few visits, draw up a map of the area you are allowed to shoot over. Obviously, you don’t need to be a master cartographer, but don’t think you can get away with just a quick sketch. Use at least a decent sized notepad whilst out walking the shoot and transfer this in the comfort of your own home to an A4 size sheet of plain paper. Also, a Dictaphone is a good aid to keep verbal notes, much easier to use than continually scribbling on a pad of paper. Always fully fi ll in the details of prime locations you’re likely to fi nd or have noticed certain areas quarry frequenting regularly and at what times of the day or night they do. If you have one, you can use a GSP locator and map software for up-dating info discovered. Conversely and more detailed; get a large-scale ordnance survey (OS) map of your area/areas, as it will have a wealth of exact information.

Clearly mark the perimeter that encloses the area where you are legally allowed to shoot. Unfortunately, in part, the land probably won’t be nice and neatly fenced off. The boundary could be a stream, an old broken wall, small tree line or even a ditch. Even at this early stage, make a note of these permanent landmarks and features that clearly defi ne the limits of your shoot. Once you’ve established the boundary on your map, you can then start to mark in the places that will be of interest to various quarry species. You should also make these your fi rst target areas.

Begin by marking any wooded areas, no matter how small, even if they are only a couple of trees standing together. These could well prove to be ‘sitty-trees’ (used by birds to rest or watch the surrounding area before moving on). If approached stealthily, or better still to be hidden up near within range, could well see you bag a few wood pigeon or rid the land of a bonus nuisance corvid once your hunting begins in earnest.

Once you’ve made the map, keep it regularly updated; by this, I mean keep a note on where you’ve seen various species or their calling cards. For instance, rabbit activity (droppings, runs, burrows), or maybe you’re lucky enough to have an area of woods used by birds for roosting. Even if you haven’t, you’ll likely have times when they will fl y over on the way to feeding areas or back to roost sights. These, when established are known as fl ight lines, usually wood pigeon but also crows use regular fl ight paths. You’re certainly not able to shoot them on the wing as the shotgunner can, but you can try tempting them down onto the ground using decoys, or for corvids, a carrion bait. Take the time and trouble to prepare yourself properly and don’t underestimate the importance of reconnaissance. A time when the saying ‘knowledge is power’ being very apt.

As a rule of thumb, at any given time of year there are some essential factors required from virtually all quarry species. These are suitable areas to build homes, that provide food sources, cover and suitable for a quick rest stop. If it isn’t out of bounds to you, familiarise yourself with the farmyard and the barns, storage sheds and any other such outbuildings you have access to. Reason being, these places are a haven for all manner of pests in the warmer months and refuge to our arch enemy, the rat, come winter.

Without doubt, observation is one of the most important, but oft overlooked of factors that makes for successful hunting. Preparation really is key. Even just meandering around with your eyes and ears open is a start. But ideally, you should be much more methodical in your approach to the subject of observation. You’ll more than likely and quite quickly get a feel for the land and when you do, you can begin to pick out key areas, lie up in a ‘hidden position’ to watch and learn more.

The easier places to fi nd are ‘homes’; these can be rabbit burrows, nests and of course feeding areas. Granted, at times, all your searching will seem boring, but at others very interesting and eventful. Try to learn from everything you see, even from animals and birds that aren’t on your hit list. These also will be using an area of the shoot for reasons allied with your quarry. Usually, it’s because it’s they’re rich in foodstuff, relatively undisturbed by man or both. For animals, preferably a combination of the two will make for a safe area.

Best times for watching for signs of activity are early morning and late evening; not surprisingly, these are also the optimum times for hunting. In fact, when you walk around your shoot, looking for signs of life, it’s very important you go at the time you will be intending to hunt in the future. It’s no use you being in the right place at the wrong time. If there are trees, then squirrels will also be on the list of possibilities. In relation to the latter, for some reason, they can be quite oblivious at times to your presence and the threat you pose to them. That is until you’ve started to make serious inroads into their population. This is when another and a major ‘skill’ comes into play. That being fi eldcraft in knowing how to get within range or fool the quarry, but also knowing when to leave an area to its own devices for a period. In other words, staying away.

Give it a rest

This might sound like a complete contradiction in terms, but almost as soon as you start over a new shoot you should be considering which areas to rest (stay away from) fi rst. No hunting ground has an unlimited supply of suitable quarry. Granted, there are areas that seem plagued with rats, rabbits and crows. But you’ll be amazed that at the slightest disturbance, how that very same bit of ground you once had red letter days over can soon appear to be devoid of all life.

Of course, if you haven’t been there on a major pest control cull, they’ll still be there and in good numbers. They’ll just be warier, or even have moved to a safer spot. Sod’s law intervenes again, as often that safe place is somewhere you aren’t allowed to shoot. Experience will show you when it’s time to rest an area, but it will probably be blatantly obvious, because you’ll not see any quarry, even at the most opportune of times and at ideal times. It’s called conditioning and the animal responding and reacting to adhere the basic rules of self-preservation in the wild. The importance of ‘rotating’ your shoot, especially in relation to the time of year can often be made simple by looking at the quarry and hunting options each season brings.