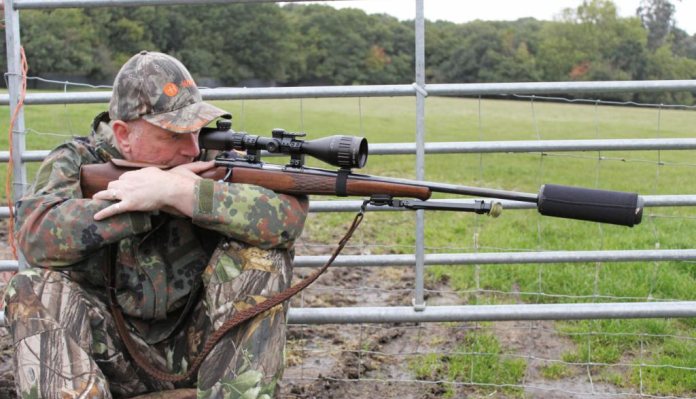 I like to think that I’ve now got my fox control technique down to a fine art, as I have a set routine when I get to the farm. I always travel with the bolt and ammunition separate from the rifle, even though I am never apart from either of them, it’s just a habit I’ve got into over the years, safety first! My moderator is always removed after use too and a thread protector installed, so this has to come off before screwing the mod into place. By the way, never leave a can fitted to a rifle when stored, as you might just find that it’s rusted in place if you do. I then install the bolt whilst holding the trigger down, so that the firing pin is not under spring tension; this ensures that the rifle is not cocked when I fit the loaded magazine. I carry my spare ammo round my neck in a leather airgun pellet pouch; it holds around a dozen rounds and I have it tucked into my T-shirt for added security.

My favourite bit of kit has to be my FT-style beanbag seat; they’re normally used by air rifle Field Target competitors. It allows me to sit comfortably when waiting for foxes to appear in any given location, I can take shots from it whilst seated and I can rest the gun on it, instead of putting it in the ground.

I also use it to protect the stock and to provide a stable shooting rest if I’m using a gate or fencepost as an improvised means of support. They are cheap to buy, and I’d recommend anyone out shooting foxes to get one; you’ll be amazed at how useful they are!

I’m very lucky, in that I get to review a lot of very neat kit from a host of suppliers. Scott Country in particular seem to have a knack for selling gear that is perfect for fox shooters and not just the night vision and thermal sights that they are known for. On a recent trip to the farm, I used a couple of products that they’d sent me; the Wicked Lights A67iC, 3 Colour Change Gun Light and the FoxPro Fusion electronic caller. The light is absolutely perfect for fox shooting, as you can change the colour of the LEDs used by turning a dial; you can choose between red, green and white and the position of the beam in relation to the view through the scope is maintained perfectly. The beam can be zeroed to the reticle in the view using the adjusters and it stays perfectly centred at all times. Another great feature is that the ON/ OFF switch and dimmer on the rear of the lamp can be replaced by a flexible/remote cable that can be mounted on the forend. Still leaving the ON and OFF and the rotary switch that allows you to go from zero to maximum whilst on aim. Yes, I really like it, it’s a great bit of kit and the best lamp I’ve ever used!

The FoxPro Fusion caller is another fantastic item and can be positioned wherever you like, and the realistic sounds emitted from the two speakers can be controlled from a distance using the TX-1000 remote control handset. You can scroll through a variety of sounds (100 in fact) and choose which is right for the situation. My favourites are rabbit in distress, vole squeaks and also juvenile fox in distress.

Back in September, I got to the farm quite early and made my way out into the fields as quietly as possible, as you never can tell where a fox might be, and I’ve sometimes encountered them as soon as I leave the yard. I crept along the lower perimeter hedgerow and skirted the first large field. I caught sight of a fox near a gateway but unfortunately it was a no shoot, as it was suddenly surrounded by sheep! They’d come through the usually closed gate from the next field and weren’t bothered by the fox in the slightest, probably as they were all mature ewes and could hold their own if the fox got a bit feisty.

I therefore decided to get away from the field with the sheep in, as they were all now over the place, so would not allow me to shoot anything; once again, safety first! As I moved into one of the furthest fields, I could hear magpies chattering away to each other and, as it was their distress call, something was clearly disturbing them in the undergrowth; a blackbird also joined it, so I thought that maybe my luck was in after all.

The commotion was coming from woodland at the bottom of a slight valley, where a stream runs through, so I quickly walked down and positioned the FoxPro caller around five yards out from the hedgerow in some long grass and turned it on. I had the caller making the ‘waning jackrabbit’ call, to hopefully cover any noise that I made as I got into position. I’d only just sat down and picked up my rifle when a fox appeared from the bushes over to my left! As I was in a comfortable position, I quickly but quietly chambered a round and took aim. A shot to the chest dropped the fox cleanly at 80 yards and it was only six O’clock in the evening! I checked the fox through the scope, and it wasn’t moving, so left it where it was. Another one appeared nearer to me and it was making its way rapidly to the caller; this too went down, in less than a minute after the first! It obviously wasn’t bothered by the sound of the first shot. This one I took from the classic ‘rifle over the elbow’ FT position.

For a change, I switched the caller over to baby fox in distress and, after about five more minutes, I made it number three at 35 yards. I was certainly on a roll, but would my luck continue? Well, it did, as a few minutes later, when I took another, as it edged its way along from where I’d shot the first. There was a bit of a lull, but I soon had to deal with number five! This one was investigating the third when I shot it and I could finally drink some coffee and photograph them for posterity.

I decided to move position and made my way along the bottom edge of the field. I switched to ‘vole squeaks’ and went back to my gear about 50 yards up the slight rise. This time, I actually had time to get comfortable before the action started, but I wished my mate was with me, as two foxes appeared from different directions! The one to the left was the nearest, so decided to take it as soon as it stopped moving; this made number six and the other one ran off as soon as I fired.

Seeing as I had a dead fox lying there, I started ‘fox in distress’ fairly loud and another fox came running from the left and then leapt in the air, to land on the dead one. I’m not sure what it thought was going on, but it too paid the price, although it managed to run a few yards into the undergrowth before laying still; I guess it was adrenaline that caused this. I was nearing my all-time highest fox count and one more came to ‘vole squeak’ before I decided to have a bit of a clear up and move position again.

I often shoot foxes on the other side of the field and I had three more in quick succession, using a variety of calls and all still without having to use a lamp! By this time, the light was fading, so when I picked up eye shine with a handlamp at about 300 yards away to the left I turned up the caller’s volume to maximum, so that the fox could hear it. I was using the Wicked Light now and it came running in towards the caller at breakneck speed, so I turned the caller off with the remote and started squeaking with my mouth and it changed direction. I had to shout to make him stop and shot him at 25 yards to make 12 in one evening. I was just packing up, when another came from the right, to make a Baker’s Dozen; I would have stayed longer but I was down to my last round and I never shoot without having a spare cartridge, as you never know when you might need to put another one into a fox, just to make sure.

Well, what a night; 13 foxes in less than two hours, all in the same small field and I only had to use the lamp for the last two. It just goes to show that a well-rehearsed plan and quality gear can really pay off.