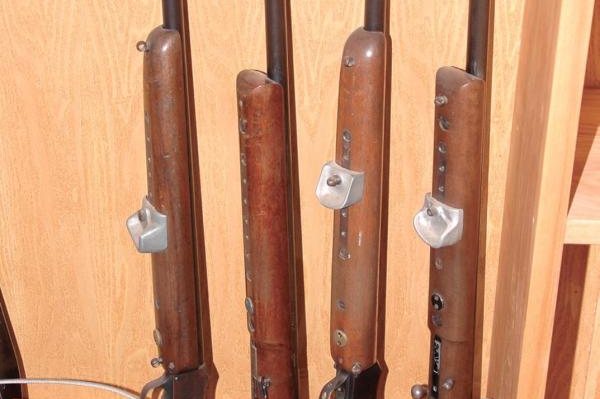 Applying for a Firearm or Shotgun Certificate quite rightly involves various stages of scrutiny, and most right-minded people would agree that that has to be a good thing. It is after all only fair, in the interests of protecting the community at large, that the individual applying for the certificate can prove he/ she has the appropriate level of home security for example.

The name of two referees are also required (one in the case of a shotgun application), and this of course can help to prove that we are known and respected by appropriate individuals; all helping to illustrate a rounded character. But a significant part of the picture takes the form of the medical records of the applicant. Effectively, it’s a case of are we fit to be granted that license?

From 1st April 2016, a significant change was made to the law, so that the Police now are required to contact the applicant’s GP/ doctor, in order to verify that the medical details confirmed, or lack of them, are the full picture. As usual, various authorities have been in dispute with the Home Office about the implementation and funding of these measures; but having now met Detective Inspector Pete Shaw; Head of Lincolnshire Police Firearms & Explosives Licensing (my local force), I have to say the future looks fairly encouraging. DI Pete Shaw has been a serving copper for 29 years, and with a wealth of experience, easy manner, and genuine enthusiasm for the job, licensing at least in this county, appears to be in good hands.

The truth is out there

So, what exactly is the issue here? Well, as DI Pete Shaw is at pains to explain, the fundamental point that they are trying to get across to the shooting community, is that applicants need to be totally truthful and disclose any medical conditions from which they have suffered, as specified on the form. And the key point is this: failure to do so will result in a refusal, yet in many cases, if the applicant had just been truthful, the condition itself would not necessarily have been enough to block the application.

With the old system, if a condition had been raised, the Police would have written to the applicant’s GP, and the doctor could respond if they felt it necessary. But if the applicant had simply ticked ‘No’ against the medical conditions listed, then no further action would have to be taken. “It was reckless to presume all was okay,” Pete concludes. Doctors and GP’s would not send medical records for free, and this was causing a potential problem in the system.

In 2016, Lincolnshire Police had a breakthrough, in their negotiations with Dr Kieren Sharrock, the Chair of the Lincoln Local Medical Committee (LLMC), and it was agreed that doctors across the county would now verify whether or not the applicant has told the truth with full disclosure. If details are submitted by the doctor, yet prove rather vague, then the Police may commission a second report in order to get a clearer picture.

Depression is a classic example of a medical condition that can be something of a grey area, and it’s all about degree. DI Pete Shaw makes his point with the classic example of the shooter who has suffered from mild anxiety and depression for over 20 years yet owned a firearm and proved to be no problem within that time. Failing to disclose this condition, and effectively lying, when renewal time comes around, has to result in the refusal of the application, yet Lincolnshire Police are saying that if the applicant ticks ‘Yes’ in 2019 against certain conditions, they are only looking at the situation as it stands now, and are not being judgemental on whether or not the condition has been previously disclosed.

Even conditions such as the mild onset of Alzheimer’s will not automatically preclude an application, and it can be possible to have a certificate granted yet be conditional on the shooter to have their gun kept and stored by someone else… themselves a ticket holder of course. For an idea of the scale of the problem, in November 2017, records showed that over 100 individuals had been dishonest with their applications; yet many of those could have had a certificate granted, if they’d only been upfront about their situation.

All GPs in Lincolnshire have now signed up to the verification policy and have agreed that a ‘reasonable fee’shall be charged for their letternormally £40-£50. They have also signed up to the ‘Enduring Markers’ scheme, (which came in in 2016) whereby, if an applicant goes to see his doctor, the system automatically flags up that he has a gun, in order to keep on top of any problematic conditions. It is hoped that this system could be rolled out nationwide, but at the moment, the medical profession is again apparently in dispute with the Home Office, which has delayed implementation in certain counties.

But there’s a lot to be said for the logic of this approach, as Pete explains: “Take for example, an applicant who goes to see his doctor, and specifies serious depression. The doctor could then ask him to voluntarily surrender his gun, just for the period of assessment – a sensible precautionary measure in this case.”

So, where new applications are concerned, who makes the final decision? Lincolnshire Police have three decision makers, and as DI Pete Shaw highlights, all with plenty of real world experience. “We have a former Armed Response member, an ex-army Sergeant Major, and a former Chief Firearms Commander- two of which are themselves shooters”.

In Lincolnshire, G4S deal with the initial applications and the county is the first to convert to an entirely on-line system. Automatic checks are carried out across the Police National Computer with regards to whether or not the individual has a criminal record, then if this is clear, a request is sent to the applicant’s GP, for the relevant verification.

Once this is all confirmed, and satisfactory, the Firearms Enquiry Officer from the Police, then visits the applicant’s home address. Security is checked, and the officer submits a report to the decision-making team.

If the application is deemed successful, then G4S produce the relevant certificate.

Teething problems with G4S, when workloads fluctuated, resulted in the decision making side of things being returned to the Police, but with the on-line, semi-automated system now helping to slash the time an application takes to process, from 12-16 weeks, down to 2-3 weeks; (and that’s from initial receipt of the application) Detective Inspector Pete Shaw is rightfully proud of where they are today. Indeed, on those figures, he may be correct in believing his Lincolnshire Force to be the most efficient in the country in this regard.

I wrapped up my highly enlightening chat with DI Pete Shaw, asking him for his comments regarding the licensing of airguns south of the border, and was pleased with the straight forward response- “Totally unnecessary- Scotland hasn’t worked well, and airgun misuse is a tiny blip on the register”.

A refreshing voice of common sense then, and a heartening view of a county that seems to have arrived at a fair and workable system for Firearm/ Shotgun Licensing.

We just need to play our part and appreciate the mechanics of the system.