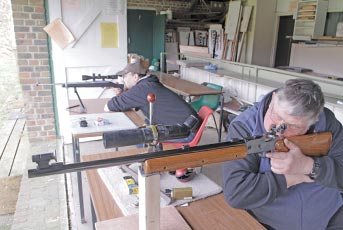 I’ve never been a member of many clubs, always been more of a lone wolf, preferring my leisure time to be a solitary pursuit, or with one or two like-minded souls. Sometimes you have to bend the rules. I’ve wanted to be able to shoot for a while. I haven’t done much; a few hours with a shotgun on a clay pigeon range, a handful of occasions while working in the US, shooting at ranges with a variety of different guns from revolvers to fully automatic assault riﬂes, but sporadically and without building any skills. Last year I treated myself an Air Arms TX200HC with a walnut stock. I thoroughly enjoy plinking away and I have been pleased to ﬁnd it not only incredibly relaxing, but something I am not too bad at.

As much as I love shooting pellets, I have been yearning to see how I would perform with live ammunition. I have also wanted to start the process of applying for a Firearms Certiﬁcate (FAC), as my partner and I have recently bought a smallholding and the ability to harvest a little game from our land will be most welcome.

I heard that a friend of a friend was a member of a shooting club and I asked if he would take me along. Tucked away in a valley not far from my home is an old 1930’s brick building that faces out onto a range where paper targets can be set at 25, 50 and 100 meters, all against the considerable backstop of a hill on the South Downs.

Established in 1911 for local shooting clubs, it was taken over by the Army during both World Wars and said to have been used by the Canadians prior to the ill-fated Dieppe raid of 1942. Up on the hill above the range is another poignant piece of history, a memorial marking the cremation site of Indian Army soldiers who died of their wounds whilst being treated at a hospital set up in Brighton Pavilion during the First World War. The Territorial Army used the range until 1984, but it then fell into disrepair. It was saved from dereliction in 2003 when it was refurbished as the home of the Patcham Riﬂe and Pistol club.

Before I could be being taken along for my ﬁrst visit I had to give my details to the club Secretary, Tony Walker, in order to have a police check carried out according to Section 21 of the Firearms Act. That hurdle cleared, I was free to attend. Ludicrous as it may seem, I was a little nervous. Shooting has become so marginalised within British culture that I almost felt I was doing something dubious by attending, an irrational thought I soon dismissed after meeting some of the members: responsible, level-headed people from all walks of life. They were also very friendly. Safety conscious and serious, yes, but friendly, welcoming and happy to impart knowledge. There was even free tea and fresh cooked bacon sandwiches at a very reasonable price. What more could you want?

The club has a number of ﬁrearms available to probationary members like me to use until they have been granted an FAC to buy their own. These include both bolt action and semi-automatic riﬂes; Marlins and Rugers mainly. Most are ﬁtted with scopes, but a couple have iron sights. They might not be the most expensive ﬁrearms, but they are well maintained and are generously provided free of charge to both members and guests. I chose a bolt-action Marlin.

I was under the close one-to-one supervision of the Range Ofﬁcer (RO) Rick. All guests must be supervised for at least their ﬁrst six visits and until they are deemed to be up to the club’s safety and conduct requirements. Rick was ﬁrm but fair, giving clear and unquestionable instruction on how to handle the ﬁrearm, how to load, ﬁre and how to remove the bolt to show it is safe when ﬁring is stopped to change targets. I then pinned my paper targets to a board and set it up at 25 meters.

Nervously, I squeezed off my ﬁrst round…. After the kick of my springer, the recoil of the .22LR rimﬁre came as pleasant surprise, far less than I expected, though the noise was certainly more. I was thrilled to ﬁnd that I had not only hit the paper, but had managed to place it just within the 9-ring. After that, I ﬁlled many magazines and holed several targets. Two hours later I even managed to get a “not bad” from Rick for my shooting. Fine praise indeed.

I’ve been back many times since, passed my probationary period and paid my full membership dues. Not only have I loved the shooting experience but the welcome and willingness to help that everyone has shown me has made me happy to join a club. I’ve been honing my shooting skills over different distances, from 25 yards to 100, in wind, rain and sun. I’ve tried shooting prone and standing. I’ve used all the club guns, which has given me an idea of what I might want to buy when I get my FAC. At present I prefer the pace of a bolt action to a semi-auto – it slows me down, helping me to relax, take my time and be more accurate. Saying that, the thrill of rapid ﬁre from a semi-auto did put a very big smile on my face!

The next stage is for me to apply for my FAC, a slightly daunting process, but one which Tony says he is happy to advise me through. I’ll also need to buy and ﬁt a gun cabinet somewhere in the house, not that there is much free space… Finally though, it will then be the really exciting bit: choosing, buying and ﬁring my own riﬂe. I will be detailing all the ups and downs of these processes.