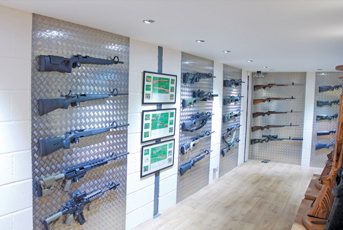 I have known Andrew Evans-Hendrick the owner of Riflecraft Ltd for many years now, and in that time have watched a dream become a small reality then slowly grow into a large and sophisticated business. His original premises were at his home address in a small but packed workshop; suffice to say you could not swing a cat in there. So with his growing reputation for building quality custom rifles for sporting shooters, plus his separate police and military commitments, things were getting a bit tight. He was always talking about moving but never quite got around to it, however and about five years ago he finally made the jump to larger premises on an industrial estate in Harleston Norfolk.

The new premises were one of three of an industrial unit and to say he had moved from a shed to a palace would be an understatement! With a massive workshop, more machinery along with improved and larger firearm/ammo storage, showroom and proper office and admin section Riflecraft Phase II looked pretty good. Here now it seemed was a place that he could do business in and offer a shop front for the shooting community. To do this he also expanded his product line with the addition of a wider range of optics, knives, cleaning kit and all the 1001 things that shooters love and need.

However, and though it all worked well, the showroom was just that and not truly a shop, so though looking good, a bit of a waste of potential. As I said I know Andrew very well and am often up there getting guns sorted or buying kit, so was surprised and impressed to hear that he was going to expand further. The plan was ambitious as it involved buying the other two units in the building and literally knocking through. The idea was very much to segregate and expand; with the workshop staying as it was but totally separate. To this would be added a walk-in gun room, along with a dedicated loading area and a proper gunshop and I mean proper gun shop! Plus there were rumours of a Cerakoating service and already talk of getting the drying ovens in.

During Phase II new staff started appearing with Head of Civilian Sales - Bentley Parsons, Mark Dunford - Gunsmith, Dave Moore - Contracts Manager (no relation) and Sam Parsons -Office Manager/PA (Bentley’s wife). Along with the old crew - Peter Gibbard - Manufacturing, Amanda Jones – Contracts/ Admin, Jen Roope – Accounts, Robert Stone - Tactical Sales and Sandra Tyler -Reception. By this time too Riflecraft had become the distributors for Kimber rifles along with Barret and their new 98 Bravo, 338 Lapua Magnum bolt-action. Plus they had their own line of cleaning kit and got branded Eagle Industries products too, like the popular butt bag (shooters stock pack). Bentley who is a very keen shooter and hunter and being from New Zealand got Hardy Moderators on line with their latest Gen III unit that I tested at the beginning of the year. Over the last year I had seen some of the building work progressing and got the summons to come down on Saturday 23rd June for the grand opening.

Well I’ve seen some gunshops in my time, but walking into the new, Riflecraft shop was like taking a trip back to the USA, where nothing is too much trouble and if you can’t see it you don’t need it. The massive airy room was packed full of kit – stocks, optics, scope mounts, knives, shooting rests, bags and everything you could imagine. There was a camo quad parked in the corner and a tree stand on the wall, standing behind the counter was Bentley grinning like a Cheshire cat. A nice touch was the comfortable armchairs you could sit and discuss your next custom gun with Andrew.

Interesting was the fact that Andrew has changed his tune a little and gone more with market forces. A few years ago he had a definite and some might say single-minded views on product and would not give house room to many brands of rifle and scope he felt were not good enough. His motto and perhaps credo is ‘only accurate rifles are interesting’. However and despite personal views as a shop keeper it’s ‘what the customer wants’ and not what you like that counts.
This was especially relevant in the optics section where Leupold, Nightforce and Zeiss etc rubbed shoulders with Deben Hawk and other more budget brands. Makes sense to me, as once you have them they will come back and then you can accessorise them fully! There were also a lot of Air Soft guns too, which is a sure indication of changing times. This was one of the reasons Derek Edgar (Edgar Brothers) was down as they do a massive amount in this area and had a player on hand to answer questions. It’s a delicate subject with shooters as we do not point guns at people, whereas they do…

So what about famous faces? Well I was there of course, with the pig roast being my priority… but also Derek (Michael Knight) Edgar (Edgar Brothers) – as mentioned above - who rolled up in his black Ford Mustang and ex USMC sniper Chuck Mawhinney was on hand for talks. I have finally jacked up an interview with him so watch this space. Also the owner of Hardy Moderators who I had an interesting talk to about up and coming equipment and projects. All the staff were there speaking to customers and also doing business as despite the day Riflecraft was open.

But there’s more. Gobsmacked by the size and sumptuousness of the gun shop I then moved into the gun room. Well it’s more a giant walk-in, security cabinet; I reckon you could drive a big 4x4 in there! The walls are lined with aluminium checker plate and packed with both custom and factory rifles of all types. With guns on hooks on the walls and also carousels in the middle, along with a video screen running adverts for all the manufacturers. I apologise if I seem to be frothing at the mouth with excitement, but the investment and commitment put into this enterprise has been enormous as it is obvious. Plus and since the sad demise of Ernie Greenberg (Crouch Gun) not many shops in the UK can boast such a facility or for that matter stock levels and it’s sure to win Riflecraft a lot of new customers from across the UK.

Turning left out of the gun room you turn left again up a set of stair and are then in the dedicated reloading area. It’s a big, open room with a bench at one end with all Hornady reloading gear bolted to it – tumblers, trimmers, presses, dies etc. On the side wall are cabinets of components – powders, primers, dies, bullets etc. The reason for the massive amount of unused space is the fact that Riflecraft is the Hornady reloading centre for the area. In conjunction with Edgar Brothers (Hornady importer) they will be running regular reloading courses, which I will be reporting on as and when they happen.

With that sorted I started talking to the visitors, whose numbers had been building steadily since the doors opened at 10.00. By 13.00 the place was heaving and I’m glad I did my photography before they arrived. The general view was – ‘I’m impressed and just what we need in this area’. Some of these were regular Riflecraft customers and others were just coming along for the first time. That was my view too; though feel it will not just be local traffic either!
I spoke to most of the staff and was keen to discuss the CeraKote process with gunsmith Mark Dunford as that’s also his pigeon. He’s the guy that built me my 6.5 Creedmoor custom too! He has been doing it for a few months and says it’s going well with both sporting and commercial work and seems to include a lot of Air Soft kit too. The results look good and I will be getting my Mini 14 sorted soon so I can see what the process entails, watch out for a video on it on www.gunmart.net too.

Riflecraft Phase III as I like to call it is a bold and very impressive move on Andrew’s part. It has firmly put the company a good few rungs up the ladder in terms of status and position in the UK gun trade. For us customers the potential is enormous as you can go there to buy something as simple as some cleaning patches. Or arrange a time and sit down with experts in the field and discuss your next custom rifle then walk around the shop and see the selection of items like stocks, mounts, moderators and scopes you might like to put on it.

It’s been a long trip for Andrew and Riflecraft and one I do not think is over yet. But whatever your needs give them a bell or better still get down there and just have a look around, I guarantee you will be impressed!