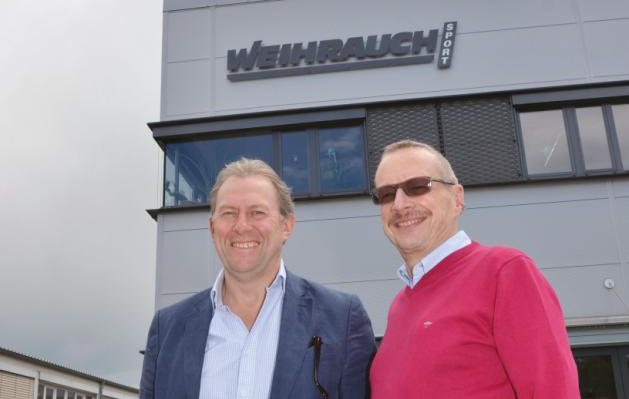 Special moments are what make life worth living, when you find yourself thinking, you just wouldn’t want to be anywhere else at that particular moment in time. I’m lucky enough to say I’ve had plenty of those, and many for me, inevitably relate to competition shooting! Oh dear….I suppose getting married should feature in the list, but the feeling of lifting the Kent Open Championship shield, or the CLA Gamefair Rosebowl after three days of hard fought graft, and the adrenalin still pumping, still takes some beating!

My early victories in FT were thanks of course to the skill of Dave Welham and the Airmasters team, but what lay behind their clever conversion work, were the springpowered airguns from Weihrauch. Weihrauch were the obvious choice at the time, given their high quality, robust design, and super accurate own brand barrels; and the HW77 in particular, led the way with its fixed barrel format. And so my happy association with the brand was cemented.

Fast forward 30 odd years, (worrying I know), and an invitation from the UK distributors, Hull Cartridge, to see round the Weihrauch factory in Germany, was a special opportunity I simply couldn’t miss; given our intertwined history. Other hacks including Graham Allen, Phil Price, and my old team mate, Terry Doe, were all along for the jolly, and as we excitedly amassed at Manchester Airport, to meet Hull Cartridge boss, David Bontoft, our collective enthusiasm was tangible.

Weihrauch have a fascinating past; formed in 1899, they were based in the small German town of Zella-Mehlis, where Walther and Anschutz were also based. 1928 saw the company begin production of bicycle parts, and even door closure fittings. After the war, Zella-Mehlis became part of Soviet-occupied Germany, forcing Hermann Weihrauch Jr and his son Hans, to move and set up production in Mellrichstadt, where the company remains today. Airgun production began in 1950….and the rest as they say…

Back to 2017, and sitting in the boardroom with current boss, Hans Weihrauch giving us a warm welcome and an initial briefing on the day’s itinerary, the time to see for ourselves this German giant’s operation, was fast approaching. Passing along glass corridors, and walking across courtyards, soon impressed upon us, the sheer size of the operation, and also how the company maintains a balance of traditional gun making skills, and new technology where it’s needed.

Weihrauch, as previously mentioned, are one of the few companies to actually manufacture their own barrels, and seeing this operation at close quarters was most enlightening. ‘Light touch’, best describes the process, as the barrel blank is deep drilled, honed and finally rifled.

A sizeable traditional machine is used to check for straightness, using tried and tested techniques, checking for shadow, and adjusting until perfect and true. Some components are cast; others cut in record time, using state of the art CNC machinery. Fine polishing components prior to the chemical bluing process, is the responsibility of one area, where huge cauldrons filled with various grades of special, abrasive stones, gently wear and polish the metal surfaceuntil super smooth. Other components are heat-treated in special compounds; using methods that Weihrauch know give them that superior look, and technical edge- processes that have been perfected over time.

Seeing the chemical bluing plant, again all done on site, is always fascinating, but for anyone who hasn’t experienced the harsh environment and aggressive chemical process that this entails, it’s an eye popping spectacle that has a touch of the satanic about it!

Step away from this time-honoured, yet slightly scary operation, and the sight of a robot, quietly going about its business, was the direct antithesis. The robotic arm picked up a gun barrel, twisted around, slowly fed it into a machine to receive some machining operations, then swung round, replaced the barrel, and then picked up another. I for one was stopped in my tracks, and it was indeed a timely reminder, of the steady march of the machines in engineering, and indeed many other walks of life, if recent widespread predictions are to be believed. Safety is born in mind, and we were directed around a designated area, marked on the factory floor. Accidentally wander too close, and into that area, and the robot automatically shuts down.

Quality control is always important, if brand names are to maintain their respected status, and Weihrauch clearly take this element of manufacture seriously. We were shown the test stations, where each gun is accuracy tested, and assessed, before despatch, and the pride in the workforce obviously plays a part.

Weihrauch make rimfire and centrefire cartridge rifles and pistols too, but their current production is 75% airguns, which illustrates just how popular they have become. Around 120 staff are currently employed by the company, and there is apparently a steady flow of new recruits, moving through a planned 3.5-year apprenticeship- taking on more responsibility and more skilled tasks, as and when they prove themselves.

Of course Weihrauch are only too aware that they need to keep evolving to keep abreast of the competition, and a sneak preview of the brand new HW44 pneumatic pistol, was evidence enough that they mean to do just that. The success of their groundbreaking HW110 pneumatic rifle, with its largely synthetic compound action, has sparked the company into producing a pneumatic pistol, and the brand new HW44 is the radical result. Expected to retail around the £600 mark, the HW44 feels every inch the perfect complement to its larger stable mate, and does indeed share a sizeable number of parts with the HW110.

Thanks to all concerned

With our factory tour sadly at an end, we just had time for a trip to the old East German border, where sections of fencing, and even an old look-out tower remain- an eerie reminder of more complicated times.

And so we left a great deal more knowledgeable than when we had arrived. Hans Weihrauch was a marvellous host, and it just remains for me to thank Hans, his staff, and David Bontoft from Hull Cartridge, for their superb hospitality, and for giving us such a wonderfully insightful and enjoyable trip.