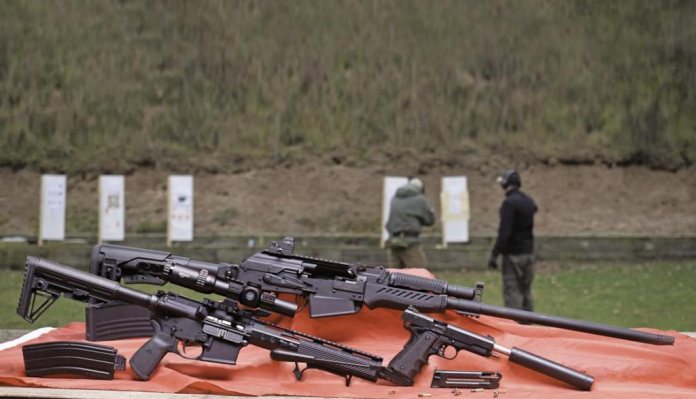 3-GUN is a practical shooting discipline where competitors move between stages, engaging multiple targets and changing the firearms during the course of fire (COF). This is all against a backdrop of time vs accuracy, less penalties. Typically, the three guns used are a shotgun, to shoot steel plates, a .22 Mini rifle e, for mixed targets, and finally a long barrelled pistol or revolver to end on.

It’s normal that you will be moving between stages, loading and shooting. It’s also typical to have obstacles and no shoot targets to overcome during your run. The course is designed to stretch your skills to identify the targets and to navigate the obstacles. These can be as simple as a no shoot target placed close to a shoot, or a screen around which to shoot, or even a door, or hatch you need to open and then shoot through.

There will be defined routes upon which you travel, and it important to study the course of fire (COF), as it’s down to the individual shooter how they approach and engage the stages. All ammo for all guns is carried and guns can be left (staged) at ‘switch tables’, or, pistols, can be on the shooter in appropriate holsters and with suitable safety considerations in some cases.

Starting positions may alter: Condition 1 - loaded, cocked, safety on. 2 Loaded, not cocked, or 3, unloaded. There may be rules of minimum shots per target – typically 2 each on paper; or stages might be freestyle, or weak hand/shoulder. Course designers might throw in complications, like start sitting whilst reading a paper, and then ‘run to get your gun’ on the start signal. Another is to engage targets whilst also holding a plastic bag with a weight in it, just to put off your point of balance.

Obviously, safety is paramount. Each shooter will be followed very closely by a range officer along the entire course, to ensure that there are no infractions as to angles of fire and safety controls are adhered to without exception. All shooting must meet the local club/range safety requirements. This is cast in stone, as it’s easy enough for a novice or experienced competitor to get carried away.

Typically, the shotgun will be a Section 1 (high capacity) firearm, however a Section 2 gun can also do the job. You are engaging suitable steel targets at a downward angle, typically 8-15m away. Targets are made to approved IPSC quality, with suitable steel and non-ricochet angles. Ours are mounted into the ground, so reducing the backsplash, and making them easy to reset.

Mix it up a bit

For the Mini rifle e and Pistol, the targets can be the normal mix of paper including the IPSC/UKPSA Hex-types. However, you can also mix it up, for more fun and challenge. Try these; challenge tree – metal paddles which when shot flip 180⁰, or the Texas wheel – suspended clays on a 5-pointed star. You shoot one, and the thing starts to spin, so now you are trying to hit moving targets! Simpler is a suspended tennis balls, or a range of bowling skittles, all serving to challenge the shooter’s skills. This is particularly relevant when you start to include ‘hard cover’, and ‘non-shoots’. The former can be a screen, or barricade obstacle around which you need to negotiate to engage the next set of targets. Nonshoots are exactly as described, but again, engaging one half covering a shoot you need to slow down and think.

Here’s an example: One COF we did in the Czech Republic, run to a table, open an envelope, inside a maths problem, then you loaded and engaged the corresponding figure on the target. Most of us suffered brain fade in the heat of the moment. Let’s just say none of us were going on University Challenge that day!

Moving with a firearm requires 100% discipline, in terms of where the muzzle is pointing (always be horizontal to the backdrop), safety catch engaged, as your brain should be too and finger off the trigger until you need to shoot. Mess up any of these and it’s an early bath – no excuses. Remember, whilst all of this is happening you are moving, loading, and shooting. Plus, at two of the stages you are going to swap your firearm for another.

So, you need to think where is my ammo and do I have enough, do I load at the stage, or as I’m moving between? Also, when swapping firearms, drills have to be top notch. Drop mag or clear chamber – nice loud ‘CLEAR’, so that the RO can see. Pick up the next one and off you go.

Here’s a typical COF: Stage 1 - Section 1 Shotgun (unloaded). A screen is positioned in front of the shooter. 6-steels, one to the left of the screen, 5 to the right. Load and engage the first (off-hand), switch hands, move around the other side of the screen, and walk to next stage engaging the other five freestyle.

Clear and dump the shotgun. Pick up Minirifle, load and engage – 4 steels, then two suspended tennis balls Finish with minimum of 6-rounds into UKPSA target at different angle and distance as fast as you can. Run to next dump table. Clear and drop rifle, pick up LBP and load. Screen in front of you. Engage 6-skittles to the right of the screen ‘weak-hand’. Reload, move to the left of the screen, UKPSA target, minimum 6-shots fast as you can whilst approaching.

Bottom line; everything has to be safe and meet the local ranges criteria. This can be done with good ROs, experienced shooters, and appropriate risk assessments to satisfy the club Safety Officer. Only word of advice I would give, concentrate upon being smoother, not faster. As soon as you coconsciously think, ‘must go faster’, it normally has the opposite effect and mistakes slip in.

Practise your drills, loading, moving, offhand shooting, clearing, and stoppages and stick a lot of rounds down. That’s the answer; smooth is fast, and this only comes from practise. 3-gun is a great, fun, safe discipline to push the shooter. It does need experienced shooters behind it in organisation and as Range Officers, but then all shooting does. Why not try it out? Visit; www.teamredflag.co.uk Mail; fma@teamredflag.co.uk