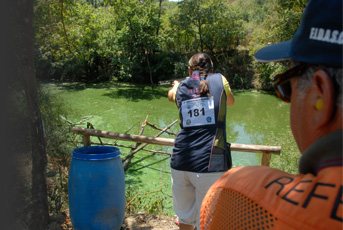 How many times have you shot a stand of sporting clays and walked off scratching your head wondering why you struggled to connect? If you have then you have been a victim of one of the most devious people in sporting shooting… the course setter. So how can you read the lay of the land and maybe beat this cunning chap at his own game?

Things are rarely what they seem; therefore it’s important to give yourself every advantage. If possible make time so that you are able to walk the course before you shoot it. Watching how others tackle the targets will give you a few pointers but the crucial information you are looking for is the positioning of the traps themselves. How far away it is from the cage and what angle is it at? For example if its tipped over slightly then the bird will probably be curling a little, though if its seen as an edge on crosser from the cage you may treat it as such with disastrous results.

A simultaneous pair may look like identical birds but a midi thrown from 20 yards closer than the standard clay from the other trap will result in them both looking as if they are the same size; you will probably end up missing it in front as a result. Take a good look around (though obviously stay within the safety ropes) and don’t just look at the stand from close range, often the course setters tricks are more visible the further away you are.

It’s not uncommon for a good setter to ensure that you are out of position for a bird. The first target may well look very straightforward with an obvious sweet spot in which to kill it, but when you do you may find that you are in completely the wrong place to tackle the second. Therefore if possible position yourself for the second more difficult target or at least be prepared to move your feet to set yourself up as well as possible for the next shot. Of course it’s not just your feet that will be out of position, most likely your gun will be in the wrong place, and that is why you may see shooters taking a first target in what you might consider a less than ideal place, but by doing so they can make a far easier transition to the next.  Of course how you approach this depends on your skill level, if you are a novice then I would always say - make sure of the first bird, remember 50% is better than nothing! Rather than thinking ahead to the second and risking losing both, but as you get more accomplished you will need to understand positioning to build a big score.

Less common than it once was the very long range target often shows a lack of imagination from the course setter. Put on a 60 or 70 yard bird on a normal round of sporting and the chances are that only the very best will have a chance of connecting. Especially if shown edge on the target may well go straight through a hole in the pattern unless you have the very tightest of chokes. A long clay showing some belly (its underside visible) is considerably easier but the occasional clay shot probably won’t have the experience to read the lead required for a shot at extreme range. Most good layouts will try to beat you with a combination of speed and angle rather than outright distance. Some shooters even go as far as having a range finder in their bag so that they can work out just how far away the trap is or how far away it lands but that is an extreme answer to the problem.

Lie of the Land

Another favourite is to use terrain to trick your brain into thinking the clay is doing something that it isn’t. Throwing the target along gently sloping ground may trick you to think its falling more than you think, or even if the course setter really knows his stuff that it is actually very flat. It is very easy to misread a bird like this and whenever you see something thrown along a slope you should be on alert, a good way to judge its flight path is to hold up something straight like the side of a gun slip and hold it level along the birds flight path; give it a try it can be surprising what it can reveal. A similar form of slight of hand is to throw the target so that it will pass behind a feature such as a tree or hedge, this can make people rush the shot because they are scared of losing sight of it, but it can also make shooters subconsciously slow and stop the gun as they approach the obstacle. The key here is to disregard it and focus solely on the target, try to imagine you are shooting it on open ground, blank out the obstacle from your thoughts and shoot it as you would normally.

One of the most hated targets on any layout is the dreaded gravity rabbit which is released down a slope, its speed being provided solely by gravity. This means that it is travelling very slowly and consequently those who try to shoot it using the traditional swing through or pull away methods will frequently miss in front. The answer is to literally ambush the target, put your gun in place along its expected path and wait for it to come to you, firing just as it reaches the gun. It feels strange to shoot a moving target with a stationary gun but this does work although it can take a while to get used to it.

Today there are a vast array of coloured clays on offer, as well as the standard black there are blaze (orange), blue, green, white, yellow, red and even pink. These can be used to turn a simple target into an awkward one, a green clay shown against a blue sky is very tricky to see, especially if the sun is glinting off its top. Similarly a green target thrown against a green background as well as being difficult to see can appear to be moving more quickly than you may think. Try to watch this stand being shot by others before you tackle it, watch what people are doing and try to work out why they might be missing before you give it a go yourself.

Close but no Cigar

Very close range targets can be extremely deceiving; everyone automatically assumes that they are going very quickly; especially if only in view for a short window of opportunity, though a course setter may in fact make them quite slow, again resulting in a miss in front. Try to be controlled and avoid throwing the gun at them, remember it may be easier to shoot it outside of your comfort zone (i.e. just before it disappears) when its further away and your pattern is bigger rather than right out in front of you.

In the Fast Lane

A devious setter may throw a following pair of targets where one travels faster than the other, overtaking it in flight; this encourages your brain to lock onto the slower first target. Then when the quicker second bird emerges your brain instinctively switches to the faster bird because it is worried that it will be out of range before you get the chance to shoot it. In this instance it’s a good idea to try and ignore the slow one momentarily, set yourself up for the second and shoot that first, you will then have time to kill the slower bird before it disappears.

With any target it’s important to understand what it is doing, if it’s moving in just one direction i.e. crossing or rising then it should be fairly straightforward. However throw in a second dimension to its flight, i.e. crossing and curling or dropping then the level of difficulty goes up a notch. Make the target take on three characteristics i.e. crossing, curling and dropping and it suddenly becomes a very difficult technical exercise that requires careful reading to understand how you need to shoot it.

I hope that this article has given you some ideas of what to look for and hopefully hope to cope with counter measures of your own. But remember without these Machiavellian people there would be no challenge and where’s the fun in that?
Good shooting!