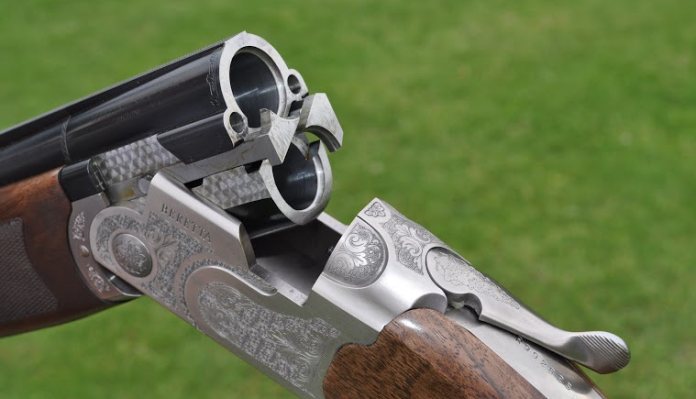 I dread to think how many clay guns I have bought in my life, but it must be in excess of a hundred having started serious clay-busting in 1969. That was ‘the year everything changed’ – the Beatles released Yellow Submarine, Neil Armstrong walked on the Moon, and full-frontal ‘Oh Calcutta!’ shocked London and Mary Whitehouse. I was more interested in Butch Cassidy and the Sundance Kid, however, visiting the Boss and West London Shooting Grounds and wondering about the new, well priced but well made, Miroku shotguns that had appeared in the window at my favourite gun shop, Thomas Bland and Sons then in William IV Street off Trafalgar Square. These new Japanese ‘Brownings’ – imitations of the B25 that Miroku would soon start making with the Browning name on them – caused quite a stir. Brownings over and unders were what most serious clay busters used then (although one would also see Browning A5 autos, Merkel OUs, as well as many side by sides).

Anyway, getting towards the point of our feature this month (and next), I sold all my worldly possessions of note (primarily my stamp collection) circa 1970 to acquire one of those Mirokus. In the intervening 40 years or more of clay shooting and competing, and a quarter century plus scribbling and gun testing, I have learnt a little about guns which may be of use to you before you go out and spend your hard earned dosh on a new firestick. Clay shooting is one of those sports where people are always looking for an edge. Sometimes, it is said that it is all about ‘the nut behind the butt’. That is true to a great degree, but so is the fact that the right gun, well fitted, by intent or luck, can make a colossal difference to your performance.

For example, before the first Miroku, I shot with a side by side game gun, after it’s purchase, when I got seriously into breaking pitch discs I discovered just how important the right equipment was. The original Mirokuwhich had double triggers was quite quickly traded in and up for a ‘pair’ – a skeet gun and a trap gun. I can still recall what a difference they made. I shot 16 on my first DTL round at Detling in Kent on the old RAF field which was not bad for a kid with no experience whatsoever. I was also shooting sporting, and, in those days, before multi-chokes and dedicated guns, it was common to do so using both a skeet and trap. The skeet gun for the close birds, the trap gun for the longer stuff. It could create dilemmas when facing a pair that included one of each!

Nevertheless, those old Mirokus really taught me the basics. The skeet and trap models introduced me to their intended disciplines as well as being useful for sporting. I discovered skeet and trap became significantly easier with dedicated guns. I also learnt that both skeet and trap guns need a little extra weight. Skeet favours a slightly lower stocked gun, with more open chokes and shorter barrels. Trap, DTL as it usually was then, was made MUCH easier with a dedicated gun – one with longer barrels, a higher stock, and tight chokes. I know this may seem like a statement of the obvious but everyone needs to learn such stuff. Later, I would refine this knowledge. Now, ironically, with better skills, I tend to use the same gun for skeet, trap and sporting for convenience (a 32” gas-operated Beretta 303 semi-auto with a light-full choke stuck in it, if I am not playing with vintage side-by-sides), but I still believe a dedicated gun can make a big difference, especially when your technique is less than perfect. A beginner at skeet or sporting will fare far better with an open choked gun, and shooters of all abilities will find trap much easier with the proper gun (especially the fast international disciplines).

Guns have changed, however. If I was advising specifically today, I would say the ideal tool for skeet probably has 30” barrels, would be choked about improved and quarter, and not be too high in the comb (at least as far as domestic skeet is concerned). Just to confuse, it might well be designated a ‘sporter’ (which with multi-chokes usually covers both skeet and sporting perfectly well). This is not the gun that used to be considered ideal for skeet a generation or two ago, as a matter of interest. A gun with 26” barrels used to be the norm and retro chokes such as the Tula system as used in the Olympic winning Vostock MU8s were considered the ultimate advantage. The commonly held – but incorrect – belief was that they extended shot string making skeet birds easier (in fact they produced a nice wide pattern without too much central concentration). I still have a Rottweil Olympia with a similar choking system which remains fabulous for any close in work with artificial targets or live quarry. But, it is not what I would call the ideal modern skeet gun. That just might be a Perazzi or Beretta DT11 these days if international competition results are anything to go by (these will be now typically equipped with standard but fairly open chokes – the rage for the Tula choke, like the fad for short barrels has passed).

The ideal DTL gun on the other hand probably wants to have 32” barrels and three-quarters and full choke (32” barrels have become more favoured over 30” which were the norm). I never did accept the argument for opening up the first barrel ‘100 chips are worth more than 99 balls of dust’, meantime. I think a tightly choked gun is easier to shoot trap with (I believe the pattern to be more efficient). It also promotes the right psychology of focus. Monte Carlo stocks (and high conventional stocks with parallel combs) and higher ribs work well at trap too (once wide ribs were thought an advantage but these have gone out of fashion as well). High combs and high ribs allow for a relaxed shooting position. A high rib would not be my general preference for other disciplines (though some use them), indeed, I prefer to shoot trap with a normal rib – 10mm parallel being my preference. So, you do not need a high rib…

Not everyone will agree, but I think the high rib guns now being seen increasingly on the sporting layouts as well as trap lines, may disrupt natural hand to eye co-ordination, though they do promote target visibility (and are therefore particularly useful for one-eyed shooters). Guns for international trap disciplines may also be better with lighter 30” barrels rather than 32” and an even higher stock. Sticking to KISS, I find my ideal DTL gun is 1/8” higher in the comb than my ideal skeet gun or sporter, but my ideal Olympic Trap gun wants to be about 1/4” higher in the comb. I give these figures as a guide only as you may well have different needs. I also prefer a parallel or near parallel comb in skeet or trap gun, a sporter wants a little incline, but not too much (with a conventional stock, as opposed to a Monte-Carlo, I try to keep the difference in the drop measure at the front and rear of the comb below 3/4”.).

O.K. this brings us conveniently onto the subject of dedicated ‘sporting’ guns. These evolved because serious shooters got bored with taking two or even three guns around the layouts. The first sporters were usually trap guns – Mirokus and Brownings frequently – with lowered combs and opened chokes. John Jeffries of what was then Diamond Guns was one of the first to offer dedicated long-barrelledsporters in the early 1980s based on Perazzis (before that 27, 28 and 30” barrels were the norm). This was also the era when one was seeing a lot more Berettas – 680s and later the 686s and 7s, 682s. The long barrelled gun was soon seen to be an advantage for ever tougher targets, though one or two like John Bidwell hung on to their shorter guns for quite a while (Biddy shot a 27 1/2” Browning fantastically for many years). I have little doubt, meantime, that for most people teal like presentations, long-crossers, and quartering birds – especially those at distance – are significantly easier with Long Tom barrels (though I think 34” is over-doing it for most people).

Before making a Purchase

I have not said much about actually buying yet. So, here is a very important piece of advice. If you can, try before you cry. There are many gunshops on shooting grounds now, and a significant number of gun dealers will make arrangements for a trial shoot too (or allow you to take a second-hand or demonstrator gun and bring it back). Sort out the ground rules before you leave the shop. You will also find most of the major companies – Browning, Beretta, Guerini, Edgar Bros. (for Zoli), E.J.Churchill, and RUAG (for Perazzi) will offer ‘have a go days’ or special appointments in the last couple of cases for potential customers. If you are interested in their products ring them up and ask how you can arrange to try a gun first. You may also find that guns can be tried at major events like the CLA. Another way is to ask to have a few shot with someone else’s gun if it is the model you like. I cannot advise too strongly though that if you can – shoot it before you buy it.

Remember as well that to be a fair test, the gun must be a reasonable fit for you. You may need to factor in a stock change to your decision. You might love the gun, the way it handles, the way it looks, but know that the stock is too low for you (one remedy for which in the choosing process might be the addition of a temporary comb raiser) or too short (easily remedied with a stock boot – I usually have a couple in the back of the car). Be cool headed when you test a gun, do not let yourself be deluded by ‘new gun syndrome’ – sometimes a new gun just seems to make you shoot better because you are enthusiastic about it, it makes you move better, focus better, but the real benefit may be illusory. Let me also note that for many, the money spent on a new gun, might often be better invested in gunfitting and a few lessons with a reputable instructor of real experience (and it might also be added that there is great variation in the quality of instruction, but you will not go far wrong if you go by word of mouth or to an institution like Holland & Holland or West London).

Finally, when buying a gun, do not assume that big bucks will brings you more success. In some cases price does make a difference. Perazzis, the choice of most Olympic champions as noted, are famous for their great trigger pulls (especially in the leaf guns) and their stock fit. The new Beretta DT11 is a chunky gun, but very impressive with outstanding ballistics thanks to its new taper bore barrels. But, don’t assume that spending 5-10K plus is going to improve your scores. Basic models like the Browning 525 30” Sporter and Beretta Silver Pigeon 1 can perform brilliantly and be just the ticket when you are beginning or even mid-way through your shooting career. Unless you want to spoil yourself, there is no need to buy an expensive model until it is going to make a real difference to you. There are some guns like the MK38 Mirokus, moreover, which are budget priced, but still quite capable of winning a major championship. Next month we will look at some to the most popular guns, and the ones which I think offer outstanding value and performance.

Next month I want to be a bit more specific about brand and models.