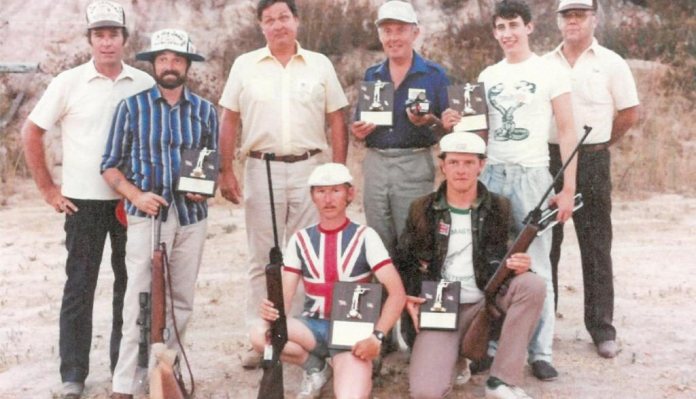 Field Target has been in my blood from an early age, and I was lucky enough to be at the very first event, held in the UK, in Sussex in 1980; just a year after I got my first gun. OK; admittedly I’ve relayed the tale of this historic event on more than one occasion, but have I told you the story of the very first International FT shoot, that also took place back in the ‘80’s? A recent conversation with an old friend, Alan Otsuka, across the pond, brought to my attention that this significant milestone in the sport’s history was in danger of being overlooked; so, I think it’s time we set the record straight, before FT goes the way of Russian history!

So, draw up a chair, and get comfortable, for this is roughly how it all unfolded…

Hands across the water

The year was 1986. That part’s not difficult for me to remember, since it must go down as one of the best years of my life. On a personal level, I was riding high in FT, with my most successful year ever, but my club at the time, the famous Markyate (later named Broomhills), based in Bedfordshire, had also just won the National Clubs Cup knock-out event, run at the time by Airgunner Magazine. Amazingly, Markyate won the title three times, and our success as effectively the best FT club in the country, caught the attention of shooters in the States.

One of our members happened to be John Ford, who ran British Sportsmatch (the father of Matthew Ford, who currently runs the business), and he just happened to get into conversation with Gary Cobb, then publisher of Airgun News & Report, at the Shot Show in 1986. The idea of a British contingent of shooters coming over to the States to compete in FT was mooted, and this was then relayed to Bob Newman, who ran Air Venture Airguns in Southern California. Bob then agreed to coordinate the venture, and it was soon decided that a British style competition would be staged, alongside an American Silhouette event, to keep the locals happy!

Setting the competition date to coincide with the 2nd California State Airgun Silhouette Championships, to be held at the South Coast Gun Club, Santa Ana, Irvine, Orange County, California, seemed a logical step, and the venue was set.

Obviously making the trip over to the States meant a mini holiday was planned, with the shoots staggered through a fortnight, in between sightseeing and general fun. A warm up practise event, the main event (as we saw it)- the First International Field Target Championships and then finally the American Silhouette standing event. My team mates and I would land at Los Angeles, take in Disneyland, see some other sights, and generally acclimatise ourselves and the guns, before getting down to business!

Getting shooting paraphernalia through an airport is never easy, and it was an ordeal even back in the ‘80’s. We had some serious hardware too, to make all the red tape worthwhile! Barry McCraw, from our Markyate team, was of course famously one of the first shooters to compete with an early pre-charged pneumatic, and being a highly technical engineer himself, Barry’s gun was soon heavily modified, to the point where it was really a McCraw. Apparently, the only piece left from the original Daystate Midas, after his full redesign, was the breech block! He wasn’t just a clever engineer though, but also a crack shot, so we were clearly in trouble! An introduction to Tim McMurray of McMurray and Sons, and a play with his paintball specials (think Bugsy Malone Splurge guns!), and a sample of his air shotguns, and we were already having a holiday to remember. But we had business to attend to!

As we neared the date for the shoot, we had playful warnings from the Yanks about rattlesnakes to contend with, and we weren’t quite sure just how seriously we should take them! The event was to be hosted by Air Venture Precision Airguns, and sponsored by Marksman International, so plenty of prizes, including rifles, were up for grabs.

Rules stipulated that guns to be used should be restricted to a maximum of 21 ft/lbs, so us Brits were already at a technical disadvantage, given our UK legal limit of 12 ft/lbs. Looking back at the printed format and working out the points system, the course must have been 20 knock-down targets, placed between 15 and 50yds, and could be shot from standing, kneeling, sitting or prone positions. Shooters were split into groups of three or four and would move round the course, each taking two shots at each target. We could stand within three feet of either side of the target’ designated ‘peg’, and scoring was unique for this event, in that the shooter was awarded 3 points for hitting the target first time round, and 2 points for hitting it the second, thus each of the 20 targets was worth 5 points (3 plus 2) giving a maximum score of 100.

Come the day, and of course in blazing heat, we arrived at South Coast Gun Club, to another warm reception. Practise was to take place on the official covered range positions, then when all were ready, we would be led out to the course. As I remember it was laid out inside dusty basins, over dunes, with knock-down targets set at all different angles, needing wind from all sides. The scoring favoured those who came out firing on all cylinders from the off, as getting the wind allowance and trajectory right first time, meant collecting maximum points.

I was confident using my trusty Airmasters tuned Mastersport HW77 and Zeiss scope, but I knew there were some good shooters there on the day. My team mates Barry McCraw and Roger Cameron were proven winners, and of course my arch rival from the Venom camp, Richard North was always a threat. The novelty of the occasion, mixed with the excellent hospitality, made for an extremely exciting and enjoyable event, and I felt I was shooting well.

As it panned out, Barry and I developed a good lead, but his extra boldness in adopting awkward positions finally paid off, and he emerged victorious, leaving me in the bridesmaid’s position. Still a nice finish, and I remember thinking that what made it even more satisfying is that Barry and I were two of only a few using sub 12 ft/lbs rifles, whilst our rivals were going for every power advantage they could. Barry was crowned the first ‘International Airgun Field Target Champion, and I took home a rifle as prize, and a nice trophy to commemorate second place, despite an inevitable feeling of what might have been!

With 47 entries for the main International competition, (tiny by today’s standards) the event was apparently widely billed as the largest event of its kind in America at the time. Among the British contingent was our club secretary, Dave Russell, and I’m sure his liaison and back ground work with Bob Newman, helped lay the foundations of the British Field Target Association that came later. The format of having a British-style FT competition alongside a US Silhouette event was also cemented and has been replicated many times since. The following year, 1987, saw a return event in the UK, held at Markyate, and whilst apparently only five Americans made the trip over, the seeds were indeed sown, for greater things to come.

We now have 39 countries taking part in FT, and a regular World Championship taking place around the globe. But that early experience in California, remains a landmark event, that forged friendships, shared aims, and a way of thinking, that has helped shape the wonderful sport of Field Target that we have today. So, thanks to all our American friends who were so wonderfully accommodating, and played such brilliant hosts at the time, and a special thanks to John Ford, Bob Newman, Dave Russell, and anyone else, who worked hard behind the scenes to get it all off the ground.