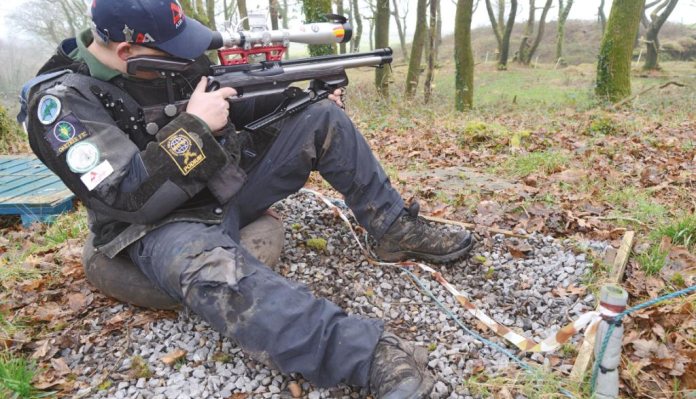 If I had to name the highlight of my FT career, it would be putting on and running as Chief Marshal, the 2017 World FT Championships in Wales. A close second, however, has been in the making for a year or two now, and that is being part of the Air Arms test team for the new top of the range FT rifle - the XTi-50! Believe me, it’s a privilege to be asked by one of the top British manufacturers for input on their latest product, given their wealth of experience in the field of designing top class air rifles for all types of shooting.

In late 2017, Air Arms called the members of the FT teams they sponsor, to a meeting, where the first prototype of what was to become the XTi-50 was shown. With over 20 opinions, it was quite a varied response to the first prototype on shown that day. I liked some things and not others, and most were similar in opinion. By May 2019, suggestions had been taken on board, and I and six others had been selected to test the next incarnation. We each had a different coloured stock on the rifle, and my number 6, was a sort of black and grey laminate. I wanted the orange and silver one, as it looked a bit flashy, like me, but that was for multiple World Champion, Jack Harris. So, and as you can see, they picked testers from both ends of the ability range!

The changes that had been made were good and it was a very exciting morning. I should have been shooting a BFTA GP at my neighbouring club Tondu, but found myself all alone at my home club, Oaktree, setting up the gun, having collected it the night before. I believe I was the only tester to set up and use 10.3-grain heavy pellets, which is good, as again the results helped Air Arms check the gun from different view-points. Once set up, I went onto our FT practice course, and missed the first target, as I came out of kill. But thereafter, I didn’t miss another one off the bag for the following two or so weeks of intensive testing. Hundreds of targets knocked over, and thousands of shots over the chronograph. It really did blow me away that ‘#6’, matched my own, highly tuned John Ostler Air Arms EV2 in the way it shot. I just instinctively knew where to point it, no matter how strong the wind was. In fact, the only issue I had was a loose butt hook. The gun went back after a couple of great weeks shooting and I reported back to Air Arms. I think it was at this point that I knew something special was in the making and I started to have a strangely proud feeling!

All the various comments were taken on board, and then the gun, still very much in prototype form, was launched to the FT world at the 2019 World FT Championships held in England. Again, there were a lot of views and comments, this time from around the world. Some were a bit strange from what I heard, talking to my many foreign FT friends, but Air Arms took notice of all the comments from a hectic few days.

Fast forward to January 2020. Actually ‘fast forward’ is not quite right, as the gun has of course had a lot of development and testing at the Air Arms factory and, if I’m honest, I’ve been nagging for ages to have another test session! Test stocks from Minelli in Italy eventually arrived in early 2020, and by now, the XTi-50’s name was confirmed!

Fellow team tester Justin Wood came in handy for delivery, even without a white van, and he did a great job of transporting the next prototype to Wales, where myself, Doz Falconer and Jack Harris (keeping the ability range) had been selected for further field testing. Wednesday 22nd January is a day I shall remember, as the day I finally decided my EV2 was going into retirement!

I am fortunate to have some great and generous friends in FT, and none more so than my Spanish-based club mate Juan V.L. Sanchez; who kindly lent me a March 8-80X magnification FT scope to test the XTi-50, plus a 46mm high rail. He did stop at letting me paint the red rail black to match the gun though! Again, it was a black and grey laminate stock, but it has to be said this one was even nicer than my first test stock; and Woody liked it, so it must be good! Scoped up and, with just a few rushed scope clicks, I put in a very respectable 36 ex 40 on our harder FT course! OK, there was no wind, and Woody claimed a 39, but that was with his familiar customised EV2. The following day with further checks, I discovered my scope’s windage had been out and this time with a few extra tweaks, I put in a personal best (PB) of 38 ex 40, only missing standing targets of 45 and 35 yards, tough shots for any FT rig. But to set a PB with a new gun on a tough course, simply stunning!

After a few days of intensive testing, it was time to hand over to Doz for his findings. Now, I expected this to be a sad day, but I was strangely glad, and proud. Proud to be part of this exciting journey that I believe is truly going to deliver an ‘out of the box’ Field Target rifle that can win any FT competition, without the need for any custom tuning.

And glad because the XTi-50 is on shift patterns between the three of us, and thus I know it’s coming back to me for more testing once Jack has had a play. Remember, it’s being tested at both ends of the ability scale!