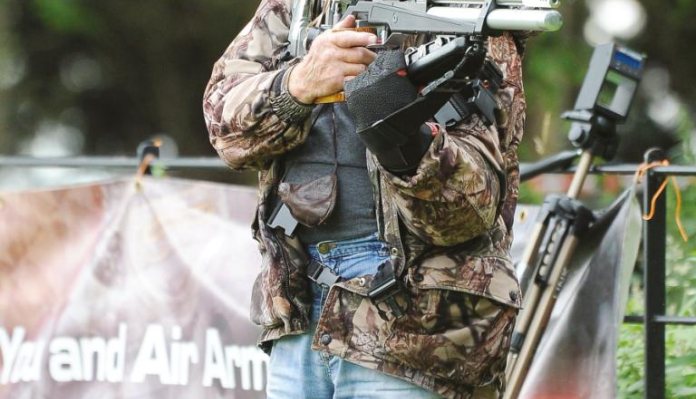 While I’ve spoken previously about the sport’s lack of youth entries, and of course that goes for a lot of hobbies these days, It has always amazed me that Field Target and indeed airgun shooting in general, is a sport where there seems no upper age boundary. Good news when you have left the 40 zone! So, let me talk to you this month about some of the elder people who inspire me.

Len of the west

The South West of England is well known as an area to retire to when your working city life has been completed. When I first started shooting in that region of the BFTA in about 2008, it was to say the least an unusual but pleasant fact, that I got called ‘boy’ by other shooters, despite being in my early 40’s! One such chap who had every right, however, was Len Showell. Now sadly Len passed away in October 2019 at the age of 84, but he had been actively shooting until a couple of years prior. I had the great pleasure of partnering him about 5 years ago in a SWEFTA FT shoot and it was just pure entertainment! Len, being an ex- London cabbie, had plenty of stories to tell as we shot around the course, him with his Springer knocking over the targets I missed and telling me “that’s how you do it boy!” It made me chuckle then and the memory does now. A fine character in the region and even a spring gun champion, an inspiration!!

Another older shooter that I greatly admire on the competition circuit is Bobby Banks. Bobby is a Midlands based shooter and has been doing FT almost from its start. Most of that time his scores have kept hm in the top flight AA grade of the discipline, and there is a fine list of wins stacked up behind the years of shooting all around the UK and indeed further abroad! OK; I’m sure he would admit that some of his magical ability is now wearing with age, as in the last couple of years, but being the other side of 70 it’s perhaps to be expected. The main thing is the loveable, but sometime grumpy sod is still on his bag, I always look forward to the opportunity to shoot with Bobby and he seems to be a lucky partner for me!

But the list goes on. It’s often said that you have not properly experienced FT until you have shot with David ‘Holly’ Hollingdale. Now, Holly is like an older version of myself, hardly any teeth, not much dress sense and talks a much better shoot than he actually scores! There are probably a whole two pages that could be written about him and his FT exploits, and one of the best is using super glue to hold a side wheel on a scope and of course it got into the scope’s workings and seized it all up. So, while some, if not most of Holly’s advice is to be reflected on before implementing, it is no doubt always given with good intentions. You can’t miss him either, as you will hear him long before you see him and then he will be the one shooting a Bullpup rifle with the butt hook on upside down!

Back home in Wales, I remember Gwynne Robinson being ‘old’ when I first started FT in 1988. In those days, I think it’s fair to say there were far younger shooters at the events. I was only 20 and as it happens Gwynne was only 45, but that seemed old then! Now 76, he really is a shining example to us all. One thing that I remember about him back then, was he was a good shot, one to beat. These days, being that bit older, Gwynne has opted for the Open class in FT, so all shots are taken off the bag. It’s such a great class, as it allows shooters to keep competing and enjoying their shooting. Gwynne usually is still the one to beat in that class, he especially does well when he comes to my own club and knocks over all my targets! A truly great chap to meet in competition and a privilege to have known him for so long.

I’m not sure who the oldest active competitive shooter is in the UK, but I don’t think many can beat 84 year old Ron Carlson from the USA when it comes to being the oldest international shooter. The 2000 World FT Champion may not make every World Championship these days, but it was awesome to see him in Wales when I hosted our World Champs in 2017 and again this year when England hosted.

84 years old, that means I could have another 35 year FT to go, I might even still have time to win something! So, be inspired by this great sport of Field Target and its varied range of shooters on the firing line, size, shape, age, sex, colour or anything else does not matter. Never forget, as it’s all about being out and enjoying it. It even seems to keep you young!