FT Blog: Round & Round 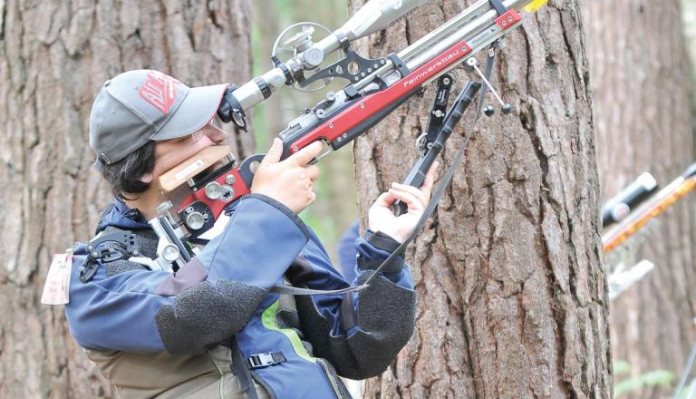 In a few days’ time, we will have shot the penultimate GP of the season (#7) at Anston. You know you will usually get a tough test from one of Andy Calpin’s courses, what I was hoping for was wind and lots of it! What we had in GP’s 4 to 6 was sun, way too much of it! GP4 was at home (well almost) for me, Nelson is just a 45 minute drive. The day was warm with 25º, unusual for a Welsh GP, as was the lack of wind! The course turned through 270º and I have to say, was one of the shortest and potentially easiest events I have shot for a while. A twitchy wind kept you on your toes, but there wasn’t much of it!

So you cleared it?

So, I cleared it ? Well, err, no, but I do have a good excuse, seven of them in fact. Firstly, nearly half the course was sitting in an off camber, slopping sitting position. I just don’t enjoy such things and was on Ibuprofen for three days post shoot and I have never suffered as badly after an event like this! I was also using the JSB 10.3-grain heavy pellets for the first time in competition. Sadly, I can’t really blame them, as it was I that over cooked and went off the boil! Such as standers, range-finding and wind; the whole nine yards. Mark Henson took the win on a 48, and it’s a sign of things to come!

GP5 was another favourite ground of mine, Bisley. Again, you never expect much wind here and it did not disappoint. A fairly standard course that was a couple of targets too long for me, but not a bad balance of ranges. There were some nice targets out there, the winner for me was the 45 yard kneeler up in a tree. Not what most would want to see on their start lane as I did, but that’s the sort of shot that suits me, inside edge took it down nicely! Bisley is a nice flat ground to shoot off, so more of a test of shooting than balance! Although it was again a warm day and little wind, at least this time the course was thankfully shaded. Sticking with the 10.3 heavies paid off somewhat, as I only missed three, including missing a target in my last lane, bugger. Another poor standing shot and another bit of sloppy range finding were other faults. Andras Fekete-Moro put in a 49 ex 50 to take the win, another ‘heavy’ user.

GP6 was even hotter, 36 to 40º! Mainly as I was in Greece! I did however pop down to the East Devon course on the Tuesday prior to the GP and ‘test’ shoot it. A rather hurried affair that I was pleased to only miss three again on, two standers and a kneeler, all for rushing however. The course, like Bisley, is always a pleasure to shoot and had a great range of targets. Like the others, East Devon is not a windy ground usually; so, it came as no real surprise when ‘tinterweb’ news oozed its way to Rhodes that Mark Henson, he of GP4 top slot fame, had cleared the course and joined a very small group of super shots that have hit all 50 in a GP - great shooting.

We are thus at the crucial six from eight rounds point in the championship, and although the current scores tell a story of who might be the champion, it’s best 6 from 8, so it’s now time for the crucial dropped rounds to come into play. If you take best four scores from first six rounds, it’s really tight and anyone of six could win it. Dan Eley, Neil Hague, Jack Harris, Andy Calpin, Justin Wood, Andras, and of course Mark Henson. Truth is, it will go to the last round which is great; I will be there to report on the final places, as I have decided not to win it this year. Again!

I like to think I am saving myself for the Worlds! I still would not bet against Jack taking the title for a 3rd consecutive year, despite him seemingly struggling of late as the pressure of life finally catches up with the still annoyingly young Welsh FT God! A-grade has seen little change and it saw Air Arms taking the top three places. I think if you added youngsters Dylan and James ages together then Bob Evans would still beat them! Sadly, I can’t see him beating them on the course but it’s great to see the old timer pushing the youth!

Big Robbo is looking good for the B-grade with his FTP and I take all the credit for ‘Dr X’ (Simon Poulter) improving greatly in the last few months and set to take the C-grade title. Sadly, my chances of making it onto the list are slim, as FT Blog is not printed on a broad sheet, so I will just have to go and win the Worlds in Poland in a month’s time!

After Rd 6 of the 8 round GP series, the leader’s boards are as follows: