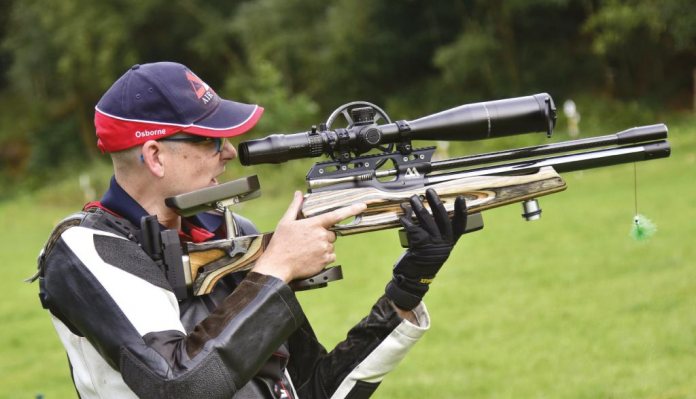 There will be a few internet posts along the lines of; ‘he or she is in too low a grade’, along with; ‘I should be in the lower grade from the trophy hunters!’

Defending champion, Jack Harris, has confirmed his summer shooting this year will be cut back due to family commitments, and indeed he is not in this year’s Air Arms team. Does that mean he will be using his Anschutz, his trusty EV2 or some other ‘new’ gun when we see him? Who knows, but when he does appear, he will be hungry for the win and hard to beat, I am sure.

Thus, the potential for a new AA grade champion is there this year. There are many who could win the series, but if I had to put money on someone, it would be Mark ‘Betty’ Basset this year. Last year was his best to date, after some 20 years of being the bridesmaid and after some time off in the winter I am sure he will be looking not only for the GP series win this year, but also to do well in the other summer competitions, such as the Worlds. Winter has shown some good, improving shooters and it looks like Air Arms Captain James Osbourne has got his FTP 900 working well, so I think ‘El Capitano’ could be back very near the top of AA. Neil Hague will be delighted if Jack has left the door open, but I’m sure many will be trying to slam it shut, in his face!

The Grading situation throws up a quandary in that it rewards the not so good shooters in lower grades if they do well but can seem unfair to a shooter who has hit more targets in a higher grade. The thing to remember, is that it’s all about encouraging shooters to try and make it to the top AA grade, while having some fun on the way?

The A grade shooters are a mixed bunch really. There are some very capable shooters in the group, but usually consistency is their problem. There are also the A grade shooters who do well at the more relaxed regional shoots, perhaps partnered up with a good friend, but who then struggle in the national series when up against more targets. 50 targets for a GP, as opposed to 30 or 40 at regional level, makes a big difference and is really demanding, but if the system is working right, shooting with shooters from other regions adds to the excitement. Add in the timing of 2 minutes per lane, not always implemented by some regions, admittedly, and there is enough disruption to see national scores tumble!

So, who will shine?

My money will be on Keith Gilyard to take A grade this year, that is unless he elects to go back into AA. Can Natalie Sheard raise her national game to match her winter regional scores? I hope so.

I also have an eye on a ringer or two who seem to have dropped their scores unusually low over the winter and thus fallen from the grace of AA into A. Genuine ability or a trophy hunting ploy? Summer scores will tell. Sadly, it’s not an uncommon problem!

B grade shooters tend to be up and coming, and again we have some who will be contenders and some who will just be out to enjoy the day. There seems to be quite a few of my fellow Welsh shooters in B grade this year. One thing is for sure, they will always enjoy their shooting and it would not surprise me if the B grade trophy heads off to Wales this year. And here, my outside bet is Paul Kelly from Rivington Riflemen.

C Grade shooters are, contrary to some beliefs, not always new shooters. That’s not to say there aren’t fairly new shooters in the grade. But in truth, most new shooters these days are quickly progressing to B and higher. C grade this summer tends to be the older shooters, usually just out to enjoy the day, and there’s nothing wrong with that! This is the hardest grade to call really, as not many shooters do all or most of the nine GP rounds. So, whoever wins it, I hope they have enjoyed their shooting above all else. I’d be more than happy to see Tony Sultana take the title this year, a true gentleman in FT.

As the season goes along, I’ll throw in some updates, and then at the end of the summer we will see just how close my predictions were; by which time of course, I will be World Champion!