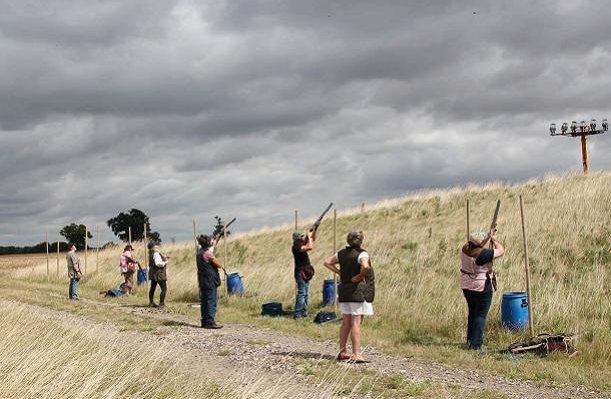 You know how it is, you get all ready for some hunting and the birds don’t fly; frustrating, yes but that’s the way it can be. However, what if you could guarantee multiple targets in a friendly yet challenging atmosphere; if so why not check out simulated game shooting? OK, you can’t eat the birds but you can get in a massive amount of practice for the up and coming season. Or, if you are like me, a bit of a shotgun duffer, just go to try and up your game!

I had the pleasure of being asked to report on such an event at Bridge Farm near Stowlangtoft in Suffolk hosted by Andrew Johnson (land owner) in conjunction with The Philip Thorrold Shooting Academy. Philip is a world famous clay shooter and also expert instructor and the days are run by his son Ben.

The day is nice and informal with people turning up for a 09.00 start and safety briefing with hot drinks on offer. Most people bring their own guns and ammo but guns and cartridges are available to hire too with prior notice. We all shot as a group but in two details, usually those waiting their turn acting as loaders and coaches (good or bad) for those on the gun line. Like I said it’s pretty informal and most of the people there seemed to know someone. After each detail we all lent a hand in picking up the cases, Andrew supplied plenty of magnetic sticks and plastic tubs for the empties.

On the point of ammunition; felt wads are preferred for obvious reasons! Also I’d advise you to bring about 500-rounds, if like me you are not the best shot in the world, or have a semi, which certainly makes me trigger happy! Gun-wise most people had over & unders. I was using a little ArmSan 20-bore semi I have been testing. Another guy had one of the new 12-bore Beretta semis with a recoil reduction system, as he had badly damaged his shoulder the year before.

Essentially you could describe the day as a driven shoot without beaters, or a case of the targets coming to you as opposed of you going to them. This is accomplished by multiple, high capacity traps firing standard and midi clays in waves at multiple heights, directions and speeds to simulate game birds. These are mounted on teleporters, which are large, off-road agricultural machines with a long, telescopic hydraulic jib. This allows the organisers to go into any location and set up to simulate bird types as well as direction. For example, we started off in the chalk pit with medium high crosses, just to get out eyes in. Then it got interesting!

Moving on to the reservoir, targets come in 90° left and right and quite low or at shallow angles. This took us to lunchtime, which is eaten on the range and consists of hot food like bacon and sausage sandwiches, along with tea, coffee and cold drinks. It was a baking hot day and I drank gallons of water. Refreshed, we moved on to clays coming up from behind hedges to simulate partridge and later from the woods to mimic pheasant shooting. The final set up was back in the pit; guns stand in the bottom with clays then driven over at heights of 200 ft, much like a high tower at a clay ground.

There are no instructors but we helped each other with comments, tips and of course the great British sense of humour, which is born with good grace. I’m primarily a rifleman and a poor to average shotgunner with a ratio of 3 shells to one bird, I used to be a lot worse! But with so many targets and opportunities and the aforementioned, impromptu coaching from friends, my shooting has improved, performance I can see as out in the field, as those pigeons are getting a bit easier to hit!

I have to say that ArmSan 20 proved a great little gun, though the payload might be a bit less than a 12, but put it in the right place and it does the business just as well, in a sweet shooting package with nice recoil characteristics. I got through about 400-rounds on the day, the gun did not miss a beat even in the very hot weather we had and I walked away with my shoulder feeling fine. By comparison, my big brother Chris came along and he was using a 12-bore O/U and he too fired a good few cartridges and told me he felt it at the end of the day. Guess you should get a 20 bruv!

Simulated game shooting is a lot of fun and very satisfying and keeps you sharp no matter what sort of shotgunning you prefer or your level of experience and is becoming a lot more popular in the UK. It’s also for the novice and expert alike, the former gaining experience in using shotguns in live action type scenarios, the latter just polishing up their technique for the coming game season.

Equally it will not cost a fortune compared to a real driven shoot, with the real bonus being there are no end of challenging flying targets. One final aspect I did note is that more people are moving away from the traditional 12-bore and trying 28, 20, 16 and even .410 guns. All of which can do the business just as well in the right hands! A good example of this was a couple of shooters with 410s; hardly the sort of calibre you might think would dust those really high 200 ft shots, yet both were taking these high clays equally as well with those using the traditional 12-bores. A great day, why not give it a go, I guarantee you’ll end it with a big grin on your face!