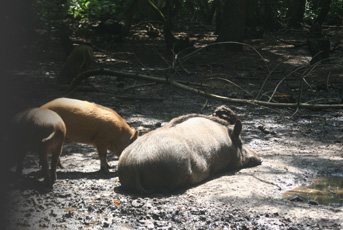 Over the last 25 years, through a variety of means, a former large native mammal has started to recolonise the British Isles. From the south coast in Sussex to the borders in Scotland, free-living, feral wild boar (Sus scrofa) are positively flourishing. With litter sizes of six or more and the ability to vanish until darkness, the bristly tide is predicted to reach most parts of the UK before long. We only need to look at the expansion of muntjac deer as a direct comparison to see what Mother Nature is capable of with the right set of circumstances!

It has taken less than 100 years for the evasive, non-native muntjac to cover most of the UK and in some areas reach epidemic proportions. So much so it’s officially classed as a pest with no seasons or gender distinction as to control. Unlike the munty, whose natural habitat is the temperate jungles of Asia, wild boar have a proven history of compatibility with the woodlands in the UK. It is of no surprise that populations are blooming and with this expansion has come controversy and conflict but also opportunity.

The exact date the last truly British wild boar became extinct is not specifically known although it is believed to have been around the late 12th century. There were a number of attempts by royalty to reintroduce them into parks as a sporting quarry from European stocks during the 16th, 17th and 18th centuries. The sophistication of farming practices during the same period meant wild boar became detrimental to crop yields in the areas of reintroduction. So became a major agricultural pest species, a reputation they would find difficult to shrug off. Their new status, coupled with the blue-blooded appetite for hunting, offered them very little chance of success. Once again they would become extinct from these shores bar a few captive specimens in zoos and private collections.

Out of Sight, Out of Mind

During the 1980s, the trend for farming unusual animals hit the UK. The heady 80s saw the wealthy and well advised setting up farms to be run at loses gaining huge tax advantages on the rest of their fortunes. With huge government subsidies, tax breaks and VAT refunds, farming llamas, ostriches, deer and even wallabies became a way to invest and benefit from a multitude of legal loop holes. This menagerie off oddities was joined by a familiar face. After a 300-year absence, a French strain of wild boar was reintroduced into a number of farms in the UK.

The wild boar were merrily contained until October 1987 when the unthinkable happened. The great hurricane was the fiercest storm to hit the British Isles for 284 years downing an estimated 15 million trees. Many of these fell in the south of England, which was particularly badly hit, suffering winds of over 120 mph. It is believed some that fell in Kent and East Sussex toppled the high security pens of several wild boar farms. An undisclosed number of animals escaped into the surrounding countryside. A great deal was done to get them back and where this was not possible the advice was to shoot them on sight. However boar being boar, they headed for the nearest block of dense forestry available – and that was that.

The woodlands in the south had suffered significant damage creating mazes of fallen trees that were impenetrable to man but not to beast. The escapees took advantage of these no go areas and set up new territories in what is thought to have been small numbers. Here they remained undisturbed for a number of years and successfully starting breeding in the wild, something not seen in the UK for more than three centuries. Over time, as woodlands were cleared and replanted, dense pre-thicket areas offered perfect cover and habitat for a sizeable population to develop.

Incredibly, it was not until 11 years later that the Ministry for Agriculture Forestry and Fisheries (MAFF) acknowledged that there were two free-living populations of wild boar in the UK – one in Kent the other in Dorset. Establishing where the original animals had come from would be impossible ten generations on from 1987. The progeny of the original settlers were fully wild meaning the UK would for the third time in its history play host to feral boar.

Local hunters were quick to cash in on this new and exciting shooting opportunity. Pig shootin’ became quite an art! A private woodland in Kent was sieged with the highest density of individually owned high seats anywhere in the country.  In simple lay terms, all one needs is a couple of acres, a bag of maize and a high seat. A little patience added for good measure and perhaps some thermals for comfort and the results will come. The boar’s ravenous appetite always gets the better of them and puts the balance firmly in the hunters favour.

Today, wild boar have set up camp at many more than the original two locations MAFF originally reported. There have been a series of deliberate relocations as well as further escapes from farms and parks across the country. Kent, Sussex and Dorset still have breeding populations but the Forest of Dean in Gloucestershire reputedly has the largest in the country. The wild boar were deliberately released in the Dean in 2004 and the animals are still relatively active during the day. This has made them easy subjects for television crews whipping up a media frenzy over them.

Their Kent cousins are totally nocturnal due to hunting pressure and it is assumed that the boar in the Forest of Dean will eventually turn this way too. Amazingly, there is a population in Monmouthshire that has crossed the river Wye from the Dean and there is strong evidence of a breeding population therein. Other notable groups are in Devon and Herefordshire and most recently in Dumfriesshire in southwest Scotland has been reported on.

So now that wild boar have successfully reintroduced themselves into the woodlands of the UK what legal status do they have? They were resident in Great Britain before the non-native Chinese water deer, sika deer and even brown hare, all of which benefit from some form of seasonal protection. For the avoidance of doubt, there is no close season on brown hare but it is an offence to sell them during their breeding season. Remarkably, wild boar are treated as a non-native invasive species offering them the same status as a grey squirrel. This means no close season, so they can be legally shot all year round. Although they can breed all year round, they tend to favour spring to have their young when there is a plentiful food supply like most other mammals living in the UK.

Just because something is legally acceptable, does it make it morally so? Hypothetically, if deer seasons changed meaning you could shoot females all year, would you? Or would you stop in the spring so they could bring on another years offspring leaving aside the sentimentality of orphaning young? This is a question only you as a shooter can answer, but one I believe needs to be dealt with by DEFRA as an animal welfare issue. I think it is inconsistent of them to single out wild boar from the large mammals to have no close season.

Wild boar have always been an agricultural pest. They can set about pastureland and turn over huge swathes of ground in the search of worms and invertebrates in hours. In Europe, systems of compensation are run by the hunting federations meaning hunters pay for the damage. This system incentivises hunters to manage animals effectively but also means the farmer will not be out of pocket due to boar damage. Using a system of compensation like this offers protection from unreasonable persecution or boar being ‘shot out at all cost’. Perhaps a system such as this is something we could try and negotiate with farmers on a local basis in the UK as we are lacking a government-backed hunting federation to administer such a scheme.

Like other feral mammals; deer, foxes, and famously badgers, wild boar can carry transmissible livestock affecting diseases. Given their transient nature and the vast ground they can cover, this is a major concern for DEFRA. Following the foot and mouth and swine fever outbreaks in recent years, another host for diseases is not welcome and perhaps explains why the government is reluctant to give boar game species status. Surely, if best practice is followed – meaning the carcass, organs and the animal’s behavior are all properly assessed – then this risk can be mitigated to the same levels as our burgeoning deer population.

From the point of view of a hunter but also a conservationist, I would like to see a healthy population of wild boar but in sensible balance with the habitat. This of course requires well thought through management dovetailing with some first rate hunting. It is eminently possible for us to live side by side with boar as they do on the continent and I see no reason why there is a need to eradicate them. They are truly wonderful resource for our country and deserve to be treated in line with other large mammals residing in the UK. Even with no current law to support a close season, my boar shooting stops in early March and does not start again until October.