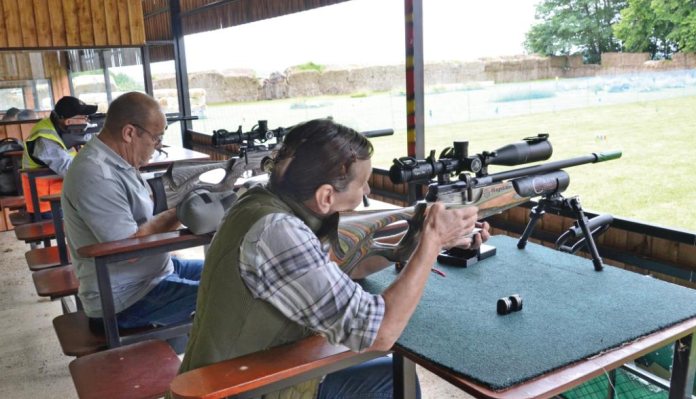 Hunter Field Target (HFT) has proved to be a popular sport, attracting shooters of all ages as well as plenty of lady shooters and families along the way. Quite a success story then, but the boys at Range & Country Airgun Club, based in North Rauceby, Lincolnshire, have possibly hit upon something which will appeal to an even wider shooter base.

The setup at Range & Country’s club is all geared towards shooting from a seated position at a bench, and shooters love the fact that they can come and set up their rifles, shoot outdoors, yet stay dry under the covered firing points. Whilst this form of shooting doesn’t appeal to everyone, there’s no doubting that many enthusiasts just want to keep things simple, with far less effort. Elderly shooters understandably find it far easier, with no getting up and down off the floor required. The gun can be rested and pinpoint zeroed with minimal fuss, and assuming the wind is playing ball, it’s all very civilized.

But what if the appeal of the bench rest format could be combined with the excitement and challenge of Hunter Field Target? Well, that’s what Peter, Chris and Laurence, the team behind Range & Country, appear to have hit upon and it all sounds rather exciting.

I’m met by Chris Bentley, who is one of the members at the Rauceby range, who has been instrumental in developing the new format, and Chris’enthusiasm for this new concept is infectious. ‘A-HFT’ has been adopted as the provisional name, standing for Alternative Hunter Field Target, and whilst this new development has been discussed and mulled over by the Range and Country team, with Chris getting much of the plaudits, as a key driving force, he’s at pains to point out that it has been a shared vision from the start.

He goes on to say: “Alternative HFT is intended first and foremost, to be a fun discipline, with the keywords being accessible and fun. We have put together some guidelines with regards to setting up our A-HFT course at N. Rauceby, but as this is currently still ‘in-club’, we are still experimenting with all of this, so feedback and suggestions are greatly appreciated.

“A course will consist of 30 targets, divided into three sections. The first section will have nine blue targets of varying sizes, to be shot from the freestyle ‘supported’ position, and one black target, which is the discipline shot. The next section will have nine yellow (again to be shot freestyle) and one black, and the last section eight red free targets and two black. Those black discipline shots will be specified in each case - two will be shot ‘semisupported and two will be designated as the dreaded unsupported.

“We are refining things as we go to be honest, with the aim of producing a challenging but accessible and fun series of repeatable courses. Our aim is to encourage involvement, irrespective of abilities, in a pleasant and welcoming environment.”

Look at the diagram pictured and the A-HFT positions are clearly defined. The supported position allows the shooter to take the shots sat at the bench, with a beanbag support holding the front of the rifle. Semisupported allows the shooter to be seated, but properly holding the gun, only using the bench and no beanbag allowed. Unsupported shots can be taken seated or standing, however, the gun or elbows cannot touch the bench. Not easy for anyone, and these shots, as in normal HFT, can be the deciders on the day!

It never pays to push things too far, so in the interests of keeping things workable, and minimizing lucky shots, there is a minimum kill zone size set for discipline shots (25mm).

45 members took part in the last A-HFT competition and by all accounts, it was hotly contested. With a sizeable number of ladies and juniors, all vying for places, there’s a really inclusive atmosphere at this club. At the time of my visit, seeing shooters such as 10-yearold Ethan, excitedly shooting his Dad’s Brocock Commander rifle, and loving every minute, was a welcome reminder of the importance of attracting the next generation of shooters into our ranks. One look at the sizeable number of ladies and juniors on the club’s books and it’s easy to get quietly carried away as well as end up quite confident in the future of our great sport.

Back to the A-HFT, and shooters sometimes score as pairs, which adds a different dimension, and scores are marshalled throughout. Long-term, the aim is to hopefully get some form of inter-club competitions started. It’s early days but there is plenty of potential here. Range & Country deserve support then, and with a challenge extended to other clubs, to come and shoot their A-HFT course, and take on the Rauceby Team, they clearly mean business. Bold talk indeed, but one thing’s for sure - It’s bound to be a whole lot of fun.

The gunshop, currently based in Sleaford, is due to move to the range site, and with plans for on-site cafe facilities also in the pipeline, things are shaping up nicely. The range and on-site shop can be found at Lodge Farm, Church Lane, North Rauceby, NG34 8QU