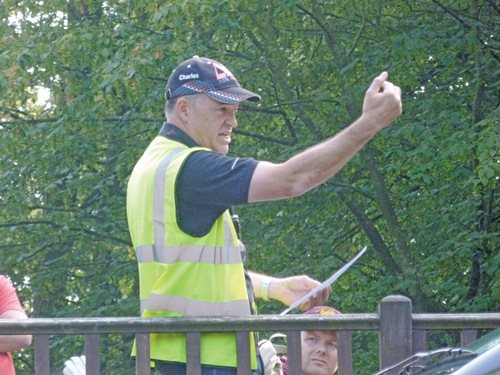 In the early days of competing in Field Target, I always seemed to be down in deepest Sussex for some tournament or such event, but these days, sadly, it’s a rarity. So any excuse to get back to this most beautiful part of the country is a given. So it was with the 2014 Air Arms RSN Memorial Challenge. With just short of 130 keen enthusiasts in attendance, a superbly appointed clubhouse, food and refreshments all laid on, we were all set for an exciting days sport. I travelled down with a couple of friends for a pre-shoot stay - my old chum Mr Welham, and a chap called Peter, who is relatively new to the game, we’ll come back to him in a moment.

The venue was the same as last year, and with, as mentioned, a marvellous clubhouse, and many acres of stunning scenery to play with, it was just about perfect. Two target courses were laid before us, with one up in the high part of the wood, and the lower course, taking in a large lake section. Here, we had floating targets, awkward angles up into trees, and a plethora of small kill areas to play tricks on the mind! Add in a hint of wind, and the game was clearly on!

With the sun breaking through the tree tops, and shimmering around the water, it really was a beautiful place to be too. Split into groups of three, we moved in succession, from peg to peg; trying to read our surroundings and gain any advantage possible. Just keeping steady though, proved to be my biggest problem, and with our first target an elevated hill shot, bouncing in the scope in time with my pulse, a bad miss was inevitable.

Half time was a chance for friendly banter, and reflection on the morning’s scores, a spot of hot lunch, and then back into action in the afternoon. I realized my limitations at this stage, and with a poor score in the morning, resigned myself to an afternoon of pure enjoyment. Peter however, from my neck of the woods, and a relative newcomer to HFT, had only dropped three points, so in theory was still in with a shout. But with rumours of a few high scores already in, it was going to be tight.

As it happened, Andy Simpson shot superbly, only dropping two targets all day, giving him a clear win by four targets! Quite phenomenal shooting, and worthy of the rather nice trophy up for grabs. David Nicholls also went home happy, after winning a brand new mouth-watering FTP900 match rifle in the raffle. Not a bad days work, and his grin said it all!

Thanks then to Claire West, along with the crew at Air Arms, and all who made this event such a resounding success. It really is becoming one not to be missed in the calendar!

So what of my mate Peter. Well, after another solid score in the afternoon, he finished on a very respectable 92. OK; he narrowly missed out on silverware, but analysis of the scores shows that he only missed out on a battle for second place by two points!

Beginners luck? Well not really. You see HFT can be enjoyed on any level, but Peter is someone who goes into things in depth. He enjoys research into the more technical aspects, and is prepared to invest time and effort in improving every aspect of his shooting. Positional shots are practised, despite a dodgy knee, and little else is left to chance. Pellet trials indoors have shown the way, whilst familiarity with the rules governing kill zone sizes and distance, has also helped to build confidence. A succession of good results at local level has now been capped off with a solid performance and finish at the Air Arms Memorial event, and it’s no more than he deserves in my book.

The old adage that ‘you only get out of something what you put in’ still holds true. Of course a modicum of talent is required, if high-end finishes are the main aim, but Peter just goes to prove what some determination and sound preparation can achieve.

For pre-booking application forms and downloads regarding competitions (where bookings are still possible), and all the latest information on anything connected with Hunter Field Target shooting, take a look at the following websites: