HFT Diary: Best of the Best. 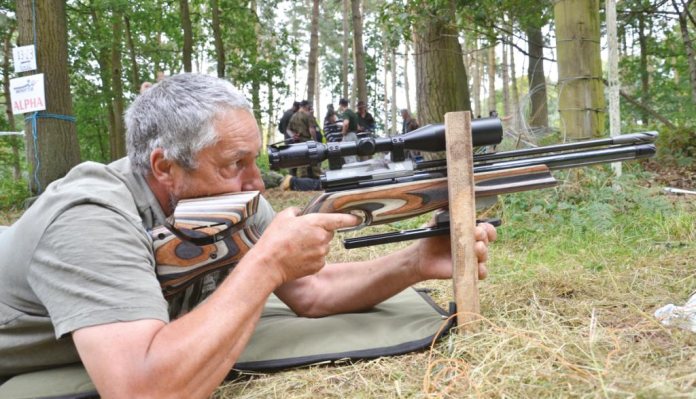 I’ve been a huge fan of the Midland, having hardly missed one, over the last 25-years or so! The Field Target (FT) European Championship has been a regular side show for many of those years, and that acted as an extra draw, whilst I took part in that discipline. So, when Pete Sparkes, chief organizer of the UKAHFT organisation, managed to negotiate with Countryman Fairs, to move our HFT World Championships to the Midland, (to avoid the atrocious Easter weather, regularly metered out to us at Kelmarsh!), I for one got rather excited!

Weston Park, in the beautiful county of Shropshire, plays host to this event, and for those who have yet to sample the delights of this classy venue, let me just say the word ‘stunning’ is a good place to start. The Midland Game Fair itself, is always an enjoyable family day out, and with this as a backdrop to our flagship World Championship, and two days of blazing sunshine forecast back in mid-September, we were all set for a great weekend.

Around 360 competitors from seven countries had pre-booked their places for the event, which takes some organisation. Yet, with Pete and Jane Sparkes, Charles Peal, Kieren Turner, and their team of helpers and course setters, all working tirelessly behind the scenes, everything played out like clockwork. We even received a welcome pack, including hat and quality pellets, all indirectly helping to ratchet up the pressure and add to the sense of occasion.

We competitors were designated named groups, and given one of two courses to start on, either AM or PM on the Saturday, then we would shoot the second one on the Sunday. I was given Bravo for a PM start on Saturday, and then Alpha for Sunday morning.

Both courses were quite superb and presented different challenges to even well-seasoned shooters. Bravo had us walk into the side of a fairly shady wood, only to be confronted with a huge, deep basin- apparently the remains of an old quarry. Lying around the lip, and then shooting at targets either in or across the bowl section, was a real brain teaser. Looking at the results, caused more than the odd headache for a sizeable number of competitors. Initially, I couldn’t stop grinning, as the unique layout and pleasing conditions, just made it a pleasure to be there. I know it sounds a cliché, but it’s certain moments such as this that remind us of what a great sport we have.

I’ve often said that there’s an element of luck in how you arrive at the start line, but I felt perfectly in the mood, and up for the fight. A 53 was a respectable finish, but harbouring higher ambitions, I was well aware that dropping three or four discipline shots, due to fitness levels, was going to cost me dear! All the long technical stuff, no problem; but I appeared to have forgotten how to shoot kneeling or standing!

Elsewhere, five shooters had posted a superb 58, giving them a twitchy overnight stay, as they each mulled over the possible outcomes. The halfway stage is all about being in with a chance, and realistically, 55 plus, is a bare minimum. Elliott Compton was one of those talented individuals, who had manoeuvred himself into pole position, and with his fast growing pedigree, and relaxed manner, he must have known he would be there or thereabouts.

And so, as the first day was coming to a close, it was time to check the kit on the zero range, and scores with friends and arch rivals. I looked into the practise tent, only to find young Jay Molde-Keefe adjusting his custom stocked Air Arms S400 with his dad. Jay is just 10 years old, and still flushed apparently, from winning the Junior European HFT title earlier in the year. His proud father was on hand for advice, and I have to say it was a heartening sight, as Jay represents the future of our sport after all.

Of course, at the close of shooting on day one, there was the small matter of the raffle to sort out, and with thousands of pounds worth in sponsored prizes, this was an element of the day not to be missed. Several rifles were given away, including a custom stocked Anschutz and a Steyr Challenge, along with a host of cash prizes and other fare, and the generosity of all involved was much appreciated. A great first day then, and time to retire to the hotel, have a couple of drinks, a nice meal and an all-important recharge.

Day two, and for me, this was now an early start. Safety briefing done, it was time to head onto Alpha course and into the fern lined wood. Again, the quality of the target layout, and the beautiful surroundings, had me pinching myself, as the beginnings of another scorcher flickered down through the treetops. With young Tom Willingham, one of my shooting partners for the duration, acting as a calming influence, again, I felt I was in a good place, and long, technical shots, seemed in the bag if I did my bit. Perhaps my only criticism of the weekend would be the target placed in an incredibly dark box and I can’t have been the only one who had real trouble seeing it; with Zeiss optics no less! I hit it, but more by luck than judgement.

One miss in the first 20 targets was a satisfying start, yet as we turned a corner into the open field section, two misses on the trot had my brain scrambled and racing for a solution to stop the rot. A finish of 56 was my best of the year, and all things considered, a respectable aggregate total and finish. But if Old Speckled Hen hadn’t been my main sponsors for the year, oh what might have been?

Come the close of play, and slowly everyone gathered around the admin tent, to exchange stories of the day, and await the confirmed results. News soon spread that a four-way shoot off was set, with top lady, Theresa Reed, Elliott Compton, Dave Ramshead, and Thom Van Dokkum, all tying on 114 points. A difficult one to call indeed. So just who was going to pull it off? Elliott has had an amazing season, Dave has won everything bar the Worlds, Theresa is always a danger and never to be counted out, and Mr Dokk, well something of an unknown quantity. Well step forward Mr Van Dokkum, and a mighty congratulations! World HFT Champion, and a worthy winner indeed, for seeing off three of the hottest shooters currently on the British HFT scene.

And so, as the dust settled on a brilliant World Championship, one final piece of good news came with the statement that the Worlds could be staged at Weston Park for the next five years at least. Great to hear, and something to look forward to in our sports annual calendar. Thanks once again to all who helped produce such a world class event.

For pre-booking application forms and downloads regarding established UKAHFT events (where bookings are possible), and all the latest information on anything connected with Hunter Field Target shooting, take a look at the following websites: www.shooting-the-breeze.com www.whfto.com www.whfta.org and www.ukahft.org