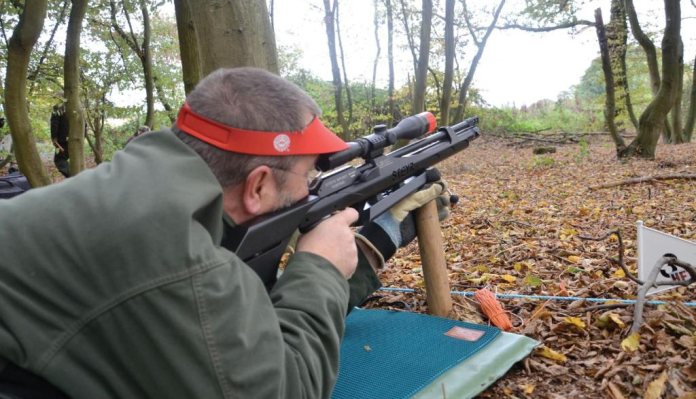 It’s been a slow start to the year for many of us, and unless the Winter Leagues take your fancy, then the World Championship at Kelmarsh would have been the first event of 2018.

Last month, I reported on the drama at the Worlds, but just the week after came the first HFT Masters event at Cambridge, and despite some dodgy wet weather either side, it passed off relatively unscathed. It was sponsored by BASC, The Airgun Centre, Hawke Optics, Jack Pyke, Ronnie Sunshines, Airgun Gurus, Field Sports Channel and SACF

Given the unholy, sodden start to the year, it was a minor miracle, that come the Cambridge round of HFT Masters in early April the cloud cover subsided, just long enough for us to exercise our right to bear arms, and thoroughly enjoy ourselves around the various copse and open field target courses, skilfully laid out by Ian Bainbridge, Roger Lait, Carl and Ray Hampton, and the usual suspects. The Masters format is differentiable from the UKAHFT, given that all six of the discipline shots must be taken unsupported. I’ve heard some curious individuals whinge about this, as well as having to take shots high up the peg, where they can’t rest their fist on the ground. But whilst this may not appeal to the ‘on a plate’ mob, I think you’ll find they’re called a challenge and great fun, as something testing and different.

Ian Bainbridge has now introduced a scheme whereby a badge is awarded to anyone who can hit all these unsupported discipline shots (standing or kneeling) in a course, on the day. As an acknowledgement of the achievement, and it’s another feature of his shoots which helps to make it different and appealing to newcomers.

At Cambridge, we were treated to a large crescent of targets around the main wood, then the long walk down the track where the huge logs are stored (this time incredibly muddy after days of rain), and then a further ring of testing stuff up in the copse . These shoots often rely on who can stay sharp, judge distance correctly, and sense and allow for the snaking breeze. I began in the wood, and having emerged just three targets down, was on a real high, and getting a little over-excited. I walked down the track to the copse end, only to fall foul of either wind (suspected) or a total collapse in my judgement (more probable). The day was won with an excellent 56 ex 60 from top shot Gavin Jones, using his custom Air Arms S400 and I limped home on a 51; respectable, but a huge disappointment, given the start.

But hold on, I’m not a proud man, and luckily that allows me to inform you that only one shooter emerged on the day, with all his discipline shots intact to claim the new badge. Oh yes, don’t mind if I do Sir! OK; I’m desperate these days…...

all eyes on harrogate

Right now, at the time of writing, the two-day Northern Shooting Show, held at Harrogate, is the next big jamboree, and I’m seriously looking forward to it. Day one sees a ‘meet the public’ stand laid on by Ian Bainbridge and his merry band of HFT Masters helpers. I’ll probably lend a hand there at some stage in the day. Last year saw an endless queue of parents with the little’uns waiting to have a go, and several of the parents for that matter, and BSA did a great job of laying on the hardware to play with. Just seeing the youngsters’ faces as they knock down a target, is great entertainment, but you just know some of them are the next generation, hooked on the spot, and guaranteed a great sport for life.

OK; that’s the first day, but come day two, and us competitors bowl up, ready to do battle. The fun stops, and we’re there to do a job; alright, we’re here to enjoy ourselves too if you insist, but they’ll be a hotly contested battle along what looks like part of a golf course. Our HFT spot at the show ground is an incredibly scenic venue as it happens, as the Hunter Field Target course is laid out high on a hill, shooting down across a lake, then we weave in and out among the trees, again shooting at targets sweeping down across the vale. All very spectacular, and an ideal spot for the public to get a proper look at what we do. It’s effectively a showcase for the sport, so I’ll be looking for a reasonable result there! Of course, by the time you read this, the result will be in; fingers crossed! For pre-booking application forms and downloads regarding established UKAHFT events (where bookings are possible), and all the latest information on anything connected with Hunter Field Target shooting, look at the following websites: https://sites.google.com/site/ukahft/ and www.shooting-the-breeze.com https:// sites.google.com/site/whfta1/

In addition, details of HFT Master’s events can be seen at www.hftmasters.com and www.whfto.com