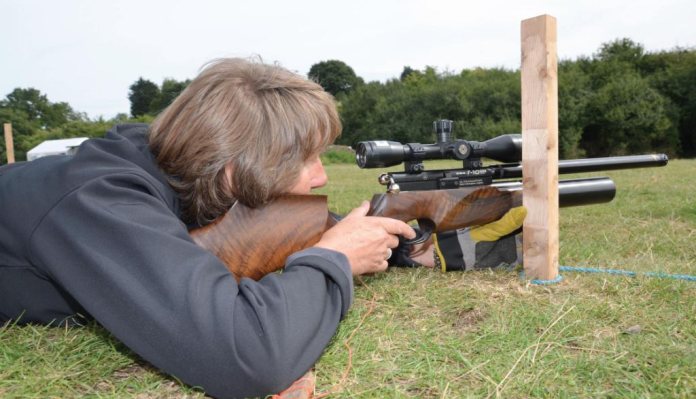 Last month, we looked at self analysis, with a view to bettering our performances in outdoor competition. I ran over a few pointers relating to the rifle. This month, it’s time to switch attention to the scope, and see whether we can make improvements in this area, as we continue to build to the beginning of the season.

Going through the mil

Up until now, if you’ve been using a basic 30/30 style reticle, with a simple cross hair, it may be time to consider a more complicated design with Mil-Dots. Much is made of various technicalities; but if much of the jargon leaves you confused and in a cold sweat lying in bed at night, then fear not. It all comes down to reference points, and as long as you have enough on the stadia, that are proportional and usable when considering our target kill sizes, you are in business!

A Mil-Dot equates to 3.6” at 100 yards, so correspondingly, that becomes .9” at 25! Very useful for airgun distances, and so it’s no surprise that the clamour for Mils has gathered momentum, and is much more widely available in airgun-specific glassware. Familiarity is often the key, and getting to know your scope inside out is a big advantage in the heat of competition. Listen to club mates, and try out some of the theories. You might be surprised just how much information is actually in your vision.

Unlike FT, where competitors have the advantage of being able to adjust their scopes for parallax and sharpness at each distance, we HFT devotees are not allowed to alter or make any adjustments to, both the rifle and scope. Despite this, many top shots still use clarity of the image as an aid to estimating target distances. This takes time, well spent down the club range, but apply yourself, see how things look at each distance, and make a mental note. Effectiveness in this area varies enormously, scope to scope, and obviously how our personal eyesight can interpret the information. What may look obvious to one shooter, can be indistinguishable by another. Such is the game!

OK; all eyes on Kelmarsh Hall, and the World HFT Championships for 2017. We have one warm up shoot, the HFT Masters round in Cambridge on 9th April, and then the biggest date in the HFT calendar is upon us. It’s a splendid venue, and with the Kelmarsh Country Fair, courtesy of Countryman Fairs, as the perfect backdrop, we are normally set for a great weekend’s sport.

Of course, inclement April weather has sometimes called the shots! I recall a couple of years back when we were treated to temperatures of minus six for both days; the coldest conditions I have competed in! And then of course last year saw our flagship event reduced to one day, when freak high winds forced the hand of the organisers, to call a halt to day two, and base results on just one day. No other decision could be made, in the face of the threat of competitors getting hit by falling trees, and all the insurance nightmares that that would entail. And with portaloos being literally blown over, I find it amazing that anyone even thought we had a choice!

So just who’s in with a shout this time around? Well, there’s the Taylor brothers, Dave and Darren, who are never far away. James McLachlan is capable of pulling it out of the bag too. Paul Kelly has been a highly placed competitor over the last couple of seasons. But for me, the winner looks most likely to come from the top three finishers from the UKAHFT National Series placings last year.

Both the Series winner, Richard Woods, and runner up, Dave Ramshead, just proved astonishingly consistent over the entire season, posting remarkable scores time and again, when the rest of us were often sobbing uncontrollably in the car park. But my top tip for the smart money isn’t either of those. No; I reckon a certain Mr Justin Grice, a dark horse whose soared up the rankings, might just show us how it’s done, come Easter weekend. His perfect temperament has seen him emerge as the ‘Star Turn’ over the last season or so, and I certainly wouldn’t bet against him.

Hold on though. There is of course one other outsider surely? Is he past it, we shall have to see!

In addition, details of HFT Masters events can be seen at www.hftmasters.com