HFT Diary: Tooling up for the season 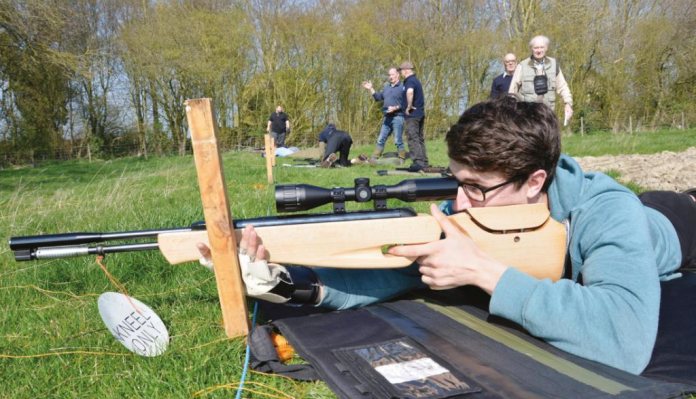 Come a new HFT season, and the usual assessment of kit has to be done. If my local club is anything to go by, there’s some serious ‘tooling up’ going on, for that extra edge in the heat of competition. Gentle peer group pressure plays a part, as does the influence of successful shooters and we now have a few of those amongst our ranks.

Watching and learning from those who have achieved a modicum of success in competition, makes sense. And it’s heartening for me, to see the club I set up from scratch, with a group of totally inexperienced individuals, evolve and develop over time. Jack proved a natural shot from the start but having watched Jake Miller (featured recently in my diary), hoovering up silverware around the country, with his BSA Goldstar, Jack was keen to follow suit, and recently bought the same model, in Black Pepper laminate. OK; our club courses aren’t always at full stretch, but a succession of high 50 finishes already, with his new kit, tells me this young man is going places.

Romek is a fellow team member and a good shot with a wealth of indoor Light Sport Rifle experience, but he’s still trying to get to grips with HFT, and the vagaries of shooting outdoors in wind! His new venture of sourcing some rather tasty custom stocks from Custom Stock, based in Sheffield, has caused quite a stir locally. He runs two heavily customised Air Arms S400 models (both fitted with Dave Welham’s regulator from Airmasters), and has now dressed them both in new timber. Custom Stock normally work to set patterns, off the peg so to speak, but after a few conversations, explaining his idea for a few tweaks, Romek has ended up with a superb walnut creation, that’s rather unique in airgun circles.

A variation on the company’s CS1000 model, this special edition sees a much lower, parallel forend and an early cut-off for the butt; allowing for Romek’s obsession for fully adjustable butt hooks to be fitted. This one is supplied by System Gemini and is a super robust assembly that can be adjusted to perfectly mate with the shoulder. There’s also an ergonomic grip, rosewood cap, and adjustable cheek piece, so everything to promote correct handling and shooting position.

Earl is another relatively new recruit, and he’s a handy shot too, with plenty of experience. An Air Arms MPR has been his go-to favourite rifle for some while, but he’s recently been playing with the HW101, recently acquiring an Aeron fully adjustable custom stock from Sure Shot Airguns. This specialist, modular furniture is becoming quite popular on the HFT competition circuit, and that combination of adjustable grip, forend, butt and cheek, can really make a difference in terms of comfort and support in the right areas.

Aaron is one of the younger shots in our team, (I think he’s about 19) who has honed his practical skills, to the point where he now tunes up his own spring guns and has also just made himself a custom target stock, to fit his Walther LGU. The design is a clever piece of work and the result of hours of painstaking effort, but for real enthusiasts like him, it’s a labour of love that should pay dividends. A deep, supportive forend, fully carved out, hand grip thumb hole area, and adjustable butt and cheek piece, are all finely set, and with his ability, he’s another that looks set for great things.

Each to his own

Whilst the rest of us jostle for supremacy over the target course, trying to gain an edge and enjoying the competitive challenge of it all, good old Dave does his own thing on the practise range, normally with the assistance of a stool and a tripod, to take the weight of the gun. Several other shooters, often retired, may join him, and it’s the social side as much as anything else, that keeps them coming back for more, and why not? As I’ve often been at pains to point out, whilst many of us live for the adrenalin rush of HFT tournament shooting, many shooters are simply not competitively minded. For them, the pleasure of casual shooting sessions, plinking on all manner of targets, and spending time with like-minded shooters, is reward enough. For that is surely the beauty of airgun shooting, there to be enjoyed by all, irrespective of age, sex or ability.

For pre-booking application forms and downloads regarding established UKAHFT events (where bookings are possible), and all the latest information on anything connected with Hunter Field Target shooting, take a look at the following websites: https://sites.google.com/site/ukahft/ and www.shooting-the-breeze.com https:// sites.google.com/site/whfta1/

HFT Masters have been developing their website at www.hftmasters.net so it should be confirmed soon. They also use www. facebook.com/hftmasters/. For details of their own World Championship, check out www.whfto.com.