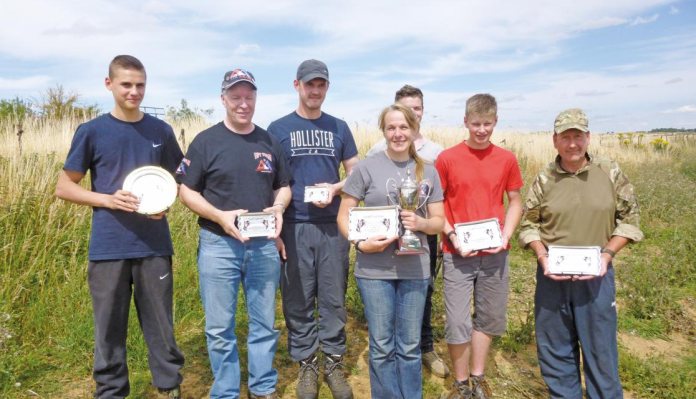 Another busy month skips by, and there’s barely been a free weekend without a competition of some sort! With summer fast slipping away, it pays to make the most of the weather of course, and for the most part, we’ve had pretty good conditions in which to shoot. Here’s a quick round-up of some of the action from the last month.

Ian Bainbridge and his merry crew have been spreading the word with their HFT Masters events and the latest one, held at the Greyhound club, near Coventry, went down a storm. My old mate Dave Welham (Airmasters) seems to have swallowed some wonder drug of late, with a spate of strong finishes. A worthy third place here, after a great score in windy conditions, had plenty of shooters double taking at the score board. Dave had a period of dominating FT in the early days, and it’s great to see him making a mini come-back once in a while in HFT.

The ‘English Open Championship’ is a title worth fighting for and this major shoot was held at a new ground that the Misfits club, (previously operating from Kibworth), had hastily arranged. I managed to get a late entry, and as it panned out, with barmy hot weather, and a lovely hay covered field to lie in it was a cracking event! Testing wind, and those super close conditions played havoc with scores, yet some big names prevailed.

With a 52 and effectively joint 6th position I retired reasonably satisfied, with my best performance of the year by far! As for the real contenders; Theresa Reed is fast emerging as a major force on the circuit. She equalled the all conquering Rudy Goldslade here and after a tense shoot-off the English Open title was hers, along with the Ladies class. Apparently relatively new to the sport Theresa is experiencing a real purple patch of form. Definitely one to watch for the future!

Maldon has become a regular host to UKAHFT events and with a large contingent of the country’s top shots in their ranks there’s plenty of experience behind their course setting. Richard Woods and Vince Holland were to blame; I mean thank, for this weekend’s bash, and the Saturday in particular, proved a real challenge.

My score can’t even be discussed, but I wasn’t the only experienced competitor to be destroyed on the hillside section! Ironically, I hit the ultra steep tree shot that caused such controversy, but this was soon followed by the dreaded zeros! Too much wind, or not enough? I’m still not sure, but thankfully, there was always the next day, to eradicate painful memories! Great scores still arrived from some with Alex Honeywell, (taking fifth here)back on form.

Generous sponsorship from Weihrauch saw plenty of prizes, including Laura Dickson winning an HW100 in the raffle, but this was just the icing on an excellent days sport, regardless of those dodgy scores.

Early start; full English, (maybe that’s where I’m going wrong) then back for more action. Staying overnight makes these shoot weekends a really sociable affair, but it’s a fine line not to overindulge and blow your chances of success.

Missing all but one of my discipline shots in the morning was the problem this time around, but Richard Woods showed us all how it’s done on his home ground, with a fantastic 57ex60. There was far less wind than the previous day but the course setters had done us proud with another superbly challenging layout. A game of two halves though, with us morning shooters enjoying perfectly dry conditions and the afternoon squad being forced to take an absolute soaking in their stride. That’s HFT!

Thanks then for a great weekend- to the sponsors (Steve Edmondson won a particularly tastyTX200 Special Edition in the raffle), and to all who worked so hard to make this, and those other events, the great success they were.

OK; lecture time! One final point that still needs to be raised is the matter of safety. When I first got into shooting I had it drummed into me that the rifle must always be pointing in a safe direction. If you are standing around, make sure that the gun is pointing down at the ground, or if you are on the firing line, have it pointing up range or down at the ground at all times. If you are showing someone your kit at a club or competition either stand on the firing line and make sure it’s pointing up the range, or do it carefully with the gun pointing somewhere safe.

If you are shooting at a club stand right on the firing line! It has just struck me of late that many of us are far too blasé about airguns and some people’s approach to safety is worrying to say the least. Virtually every event I attend I end up looking down two or three barrels, as shooters get up from the floor, or just handle their rifle carelessly, oblivious to their surroundings. Act like that at a firearms range, and someone will escort you from the premises.

Airguns, especially a PCP with a silencer fitted, can be particularly quiet, but they are highly dangerous in careless hands. I think it’s time we all sharpened up our act!