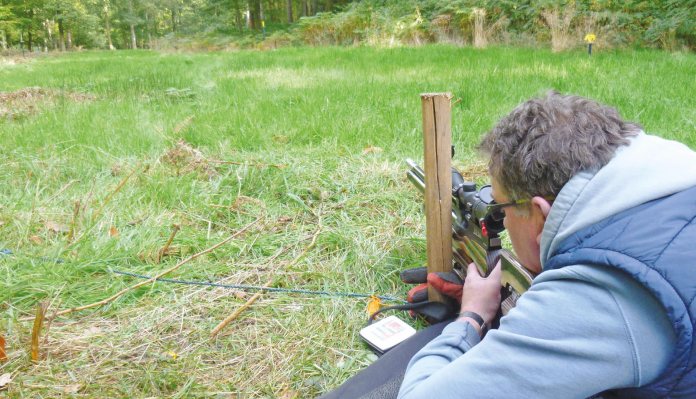 Double weekends have become a regular part of the Hunter Field Target calendar, and late October saw the latest such beano held at Emley Moor, in good old Yorkshire. What made this unusual was that the shoot on the Saturday was the last of the HFT Masters rounds, whilst Sunday’s was the last of the regular UKAHFT National Series rounds. Both events shared the same venue, but each had their own target courses and it all went rather well!

Emley’s stunning ground covers many acres of rather lush ferny woods and with an imaginative course laid out by Ian Bainbridge and his helpers, we had another fantastic day’s sport awaiting. With some grey skies and fairly grim forecasts doing the rounds in the build up to this weekend, to actually get away with a predominantly dry event was a minor miracle! But it really was one of those moments when just being there, in fabulous surroundings was a pleasure in itself, with any success a bonus. Near perfect conditions, with just a teasing breeze every so often, meant the testing course was a challenge without being overly hard.

The HFT Masters format runs a 2-tier system, where shooters who don’t regularly achieve super high scores, have their own tier in which to enter. It’s an interesting idea, and the whole format, including all free standing and kneeling shots, seems to have been very well received.

Just like the UKAHFT Series, the HFT Masters has attracted great sponsorship and with hundreds of pounds in cash prizes and some top kit on offer, it pays to hang around for the raffle at the end of the day. Prizes for this bash included three BSA rifles and with a rather swish Scorpion RS Special Edition as the main deal, someone was going home with a smug grin. Sure enough, as my own name was called, I was in a bit of a day dream. All rather surreal, but many thanks for a fab prize boys! Definitely the icing on a very enjoyable day!

Come day two of this action-packed weekend and the final round of the UKAHFT National Series was to be decided. I soon found I was to be teamed up with ex World Champion, young Rudy Goldslade and wily old campaigner Tony Male; so I needed to wake up pretty sharpish! Another superb course saw us navigating our way through a different section of woodland and again, with just a hint of wind, and no rain, it was game on.

I started well, clearing something like the first 18 targets and leading my chaps briefly by a point or so, but closing the deal is what it’s all about these days; and come that final furlong, my concentration wavered. With around three or four targets remaining, my annoyingly active radar picked up on the rumour of several clears already posted. My head sank, and what should have been a simple supported stander (dinner plate kill size!) failed to fall, followed by a pathetically close target that I failed to range correctly. Oh dear; as Rudy and Tony politely trod over me, on their way to respectability, I was left reeling on a 56, and all to count for nothing.

Yes, it’s fair to say the standard of shooting has leapt up in recent seasons, but don’t forget the different classes and categories that act as an effective handicap system. Simon Howarth knew he needed a big finish to bolster his standing in the National Series overall, and a clear course 60ex60 was some performance. Beating Richard Bailey in the shoot-off gave him top honours on the day.

Come the raffle, Daystate’s sponsorship saw Nigel Oram walk away with a Daystate Regal in .22, and with the usual cash prizes and other paraphernalia, another satisfying day’s business was concluded.

2016 looks like being an incredibly exciting year for HFT, as the sport continues to develop, and grow in popularity. The World Championship (UKAHFT rules) is already set in the calendar, and entries have been open and are filling up fast. But new events are coming on line thick and fast.

Ian Bainbridge from HFT Masters had breaking news for us at Emley, about a European HFT Championship, to be held in Poland in 2016, and there’s some form of package deal that will be offered, for those willing to travel by organized bus to the venue. All very forward thinking and an exciting development for sure! Further details should become available from the HFT Masters website in due course, but for now, I’m off to practise for the Gathering- that end of season special to cap off the season. Until then, good shooting!

For pre-booking application forms and downloads regarding established UKAHFT events (where bookings are still possible), and all the latest information on anything connected with Hunter Field Target shooting, take a look at the following websites: https://sites.google.com/ site/ukahft/and www.shootingthe- breeze.com https://sites. google.com/site/whfta1/ In addition, details of the new HFT Masters events can be seen at www.hftmasters.net