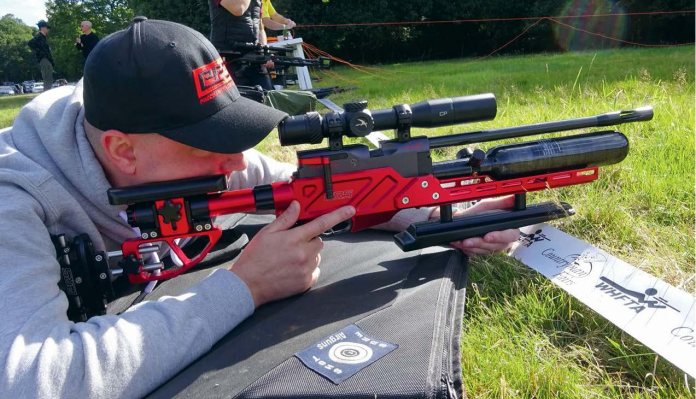 Let’s face it, how many sports let you bowl up to a world championship without having to qualify to get there? Well, that’s the fortunate position that we still find ourselves in with Hunter Field Target, and whilst it remains the case, you’d be crazy not to take advantage.

I still get a huge thrill from taking part in these events, and whilst a national shoot can still be exciting, there’s nothing quite like knowing that if you keep knocking targets down, you just might become world champion! Weston Park Country Fair, set in beautiful Shropshire, always makes for a superb backdrop, and the sprawling countryside in which we are allowed to play for a full two days of action is simply stunning. I still get a bit anxious in the lead-up to the event, but there’s really nothing to worry about.

Just imagine though, 360 competitors takes some organization, but the cool customer that is Kieren Turner, and his merry band of volunteers in their snazzy official yellow WHFTA shirts, simply did us proud. Two quality 30-target courses, laid out with thought and flair, had us pondering and sweating, even before the high winds arrived. Divided into colourcoded sessions, we either shot course Alpha or Bravo. If you were a morning shooter on Saturday, then you shot PM on Sunday, swapping courses as you went.

A look in on the practice range and a weigh-up of the wind, still had me breaking a cardinal rule, by adjusting the scope on the day! Bloody hell. Further along the line, Stuart Smith, another of the team of eager volunteers that helped make this event so successful, was on hand on the practice range to demonstrate shooting from sticks, which is an idea being trialled for shooters who have mobility problems. Something for the future maybe. I also bumped into top shot, Gavyn Jones, who now runs his own specialist engineering company PRS (Precision Rifle Systems), and with his newly developed chassisstyle modular stock system on display, initially aimed at the Daystate Red Wolf, in a rather tasty red anodized finish, it was proving something of a showstopper.

OK, time to focus. I shot Bravo on Saturday, and this snaked around a wood. It had an extensive outdoor section in more open ground, where the wind played a big part. We all navigated the course and my two chaps in tow were good company and shot well. Just about keeping up was never a good look and a fairly lame score soon destroyed my campaign, not long after it had begun. Hold on though, with £21000 worth of prizes and gear donated for the raffle, and our entry card effectively acting as the raffle ticket, it paid to stick around late on Saturday for the big draw. Four guns were among the prizes, and with Adrian Wright taking home a voucher for the brand new Xti-50 match rifle from Air Arms, he understandably wore a broad grin for the duration. I suspect he was found giggling later that night.

Come Sunday morning, and arriving back at Weston Park ahead of the game, it was time to mingle. Well, you never know who you may bump into whilst sipping a cup of tea at the catering van, and an introduction to the softly spoken, Piet Maas from Holland, proved an enlightening and wholly pleasant experience. As Piet explained, he lives in southern Holland, yet travels to an HFT club over the border in Belgium. The Dutch Field Target Association governs both branches of outdoor airgun sport over there, and with a few hundred members, they are a growing organization, according to Piet. Ten members of the Holland Team had made the journey over to the UK for these championships, and their excitement and enthusiasm for the sport were tangible.

And so to business. Course Alpha took us back to the sunken basin, where the shooter lies on the lip and shoots down and across at targets set to confuse and challenge in equal measure. A significant drop-away in the landscape in places certainly added to the drama, and shooting here was really good fun. I even managed to post a half-respectable score here come the finish. All too late, of course.

So, when the dust had settled and we’d all collected our thoughts and licked our wounds, just who had managed to keep it together? The usual suspects, Chris Cundey and the ever consistent, Elliott Compton were unsurprisingly close, but that man Neil palmer, a joint top scorer from day one, had the grit to close the deal. Well done sir, and take a bow as our new World HFT Champion!

And so, as the curtain almost closes on another season, it just remains to say thanks very much to Kieren Turner and the whole team for an incredible job setting up and staging this event, and to Air Arms and the big roll call of sponsors that helped to make this prestigious weekend such a huge success, including AIM Fieldsports, Bolne Croft Country, BASC, DAR, Davies Built Gunstocks, Derwent, Flopover Targets, Highland Outdoors, Hull Cartridge, Optisan, Optics Warehouse, PRS, Ron Daley’s, Solware, The Ratworks, The Shooting Party and Vortex. 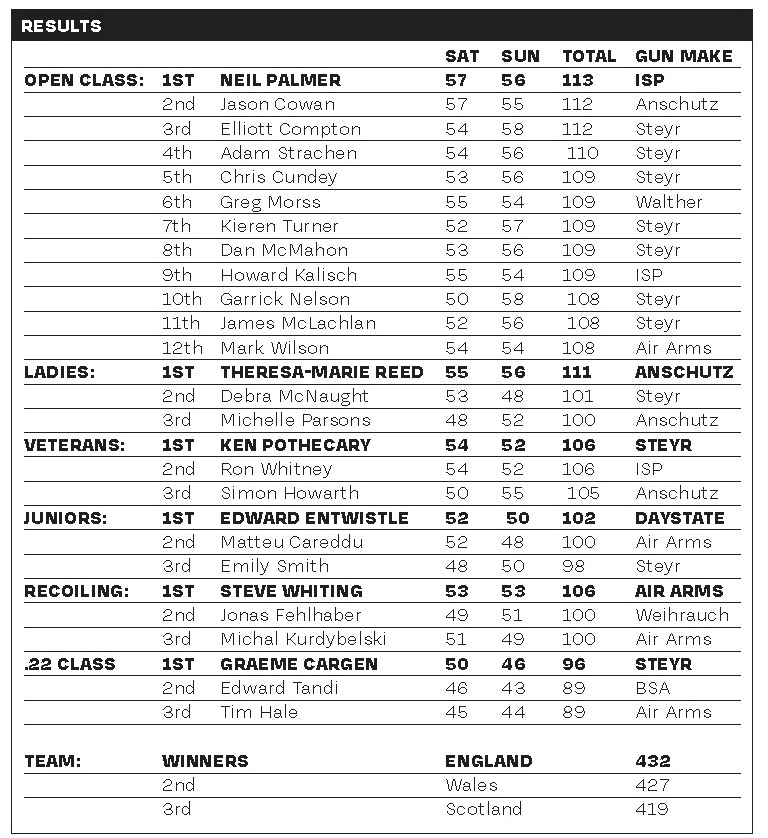