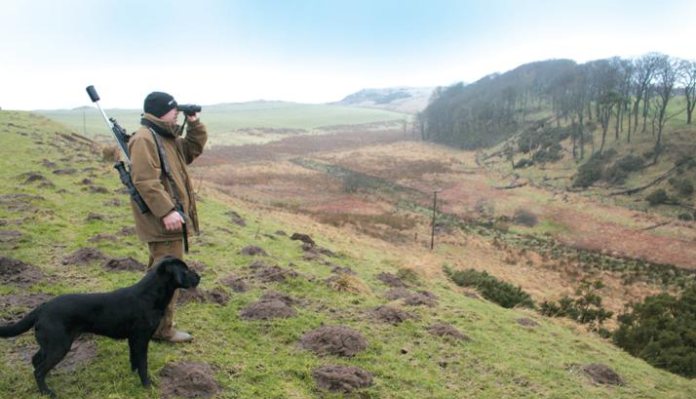 For me, becoming a professional fox controller was completely unintentional. When looking back on how I got to where I am today, it’s been a case of a lot happening in a relatively short space of time. I think it all started as a young lad growing up in Fife when my father (John Kelly) was doing a bit of vermin control on an estate up in Perth with his friend Jerry. They were helping an old Gamekeeper who I can only remember as Dick. I remember being in Dick’s house, seeing all his taxidermy and tools of the trade, and it made me think about how a Keeper’s life was so different to mine. Those memories and stories have been with me for 35 years or more.

Some of my earliest memories include seeing fox skins getting taken to the tannery at Kinghorn in Fife where they would be cured. After a couple of weeks they were back in the house; one draped over the back of the couch, the other on my parents’ bedroom floor. That was my first experience of seeing a dead fox and I remember wondering to myself, why?

As well as the foxes, I also experienced dead pheasants, rabbits, hares and a roe dear carcass hung in the garden shed, ready for my dad to take off its jacket. At the time, I remember thinking there was no way I could strip and clean those dead animals, and thought I should feel bad about what was happening to them. Although, as I got older, I realised that there was a difference between game shooting for sport and vermin control.

Once old enough, I started playing around with an old Webley air rifle at my Uncle Sandy’s place. He also introduced me to his Crossman MkII pump-up air pistols, which I absolutely loved. That’s when the shootingbug really started for me; that feeling of squeezing the trigger and trying to place the pellets inside a red dot. Uncle Sandy passed away a few years ago and he left me the two matching pistols, which are still in as good working order today as they were when I was using them more than 30-years ago! Not long before he passed away I had purchased the new Daystate Mk4 and took it to show him. He tried to work out the velocity of the gun by firing at a Yellow Pages phone book and counting how many pages the pellet had traveled through. Even at the age of 80 this old eccentric science teacher was still using old school methods on what was a state-ofthe- art air rifle. It brings a smile to my face every time I think about it.

At around the age of eight my family holidays consisted of traveling up north to a caravan on the remote Orkney Island’s. As you can imagine there was not a lot to keep an 8-year old entertained, so I spent the long summer days shooting tin cans and waiting patiently to try and maybe get a shot at a rabbit. But I think the rabbits were much smarter than I was! That’s when I realised there must be a certain kind of skill to hunting, because I wasn’t considering wind direction, noise or sight. But, like any other skill, it developed over time from what I read in magazines and from listening to my dad.

All my life I was around working dogs, because my father had Labradors for his shooting. So when I was old enough to leave the family home for a house of my own, I decided to get a dog. Fortunately for me, a good friend of mine and keen shooter, Mark Wallace had ten new Labrador pups, which were keeping him busy. After calling in on him to see them I was back down the road with my first dog - a black Labrador bitch that I called ‘Brae’. With some training she was picking-up at my very first pheasant shoot, which was also my introduction to the sport of game bird shooting. After a couple of seasons I was going to two or three shoots and spending a lot of time helping the keepers and lamping foxes at night with them, which I loved doing. That’s when I knew I had to apply for my firearms certificate (FAC). Then, after what seemed like an eternity, my ticket to shoot landed on the doormat, so it was time to go out and purchase my first rifle, which ended-up being a secondhand Tikka .243 rifle from a gunsmith in Dundee.

Everything registered and above-board, I made my way to the estate where I helped out. This time I was in the passenger seat with my .243, ready to pull the trigger on the first fox that would stand for the big lamp that was mounted on the roof. The Keeper drove through the first field, but there was nothing to see.

Into the second we spotted three pairs of eyes; from two ¾-grown fox cubs and an adult. I quietly got out of the truck, extended the bipod legs and rested on the bonnet. Within seconds I had accounted for two cubs and took a shot at the adult, but it dropped low. The Keeper said the distance on the adult fox had to be at least 250 yds, so I should have compensated for that, but there was time to improve with experience. That was my very first night as a fox shooter and I was well and truly hooked!

After helping out a lot on the estates and getting out foxing, I started looking around for my own permission, so as not to rely on anyone else. Then I could go out whenever I wanted to and also alone. Why? Because you can’t beat a solo mission; first thing in the morning, tucked in behind a wall or up in a high seat waiting on that old wiley fox making a heart pumping, adrenaline inducing appearance. So I jumped in the Landy and knocked on a few farm doors. It soon became apparent that getting my own permission was going to be more difficult. Although, I stuck with it and kept looking. The knock-backs were understandable though; why should anyone let me, a stranger, loose on their ground with a high power rifle?

At that time, I had started a business with a burger van in Kinross, Perthshire. The area was surrounded by farms, which meant lots of hungry farmers! There’s wasn’t a single person in overalls or a Fendt hat that left the burger van without being asked the question, “Do you have anyone controlling your foxes? If not, can I?” With the regular chatting at the van, a lot of them gave me a chance and that’s when I started collecting my own permissions. It grew from there. Neighbouring farmers would hear about the good work I was doing, then come to the burger van and ask me to shoot their land. When you’re out four or five nights a week getting results, the word soon spreads that you’re not mucking about.

Over the past year or so I have been lucky enough to start working with Tony Jones who owns Night Master. He’s seen how serious I am about fox control and how much land I shoot for farmers and keepers. He’s helped me to take foxing to a new level by supplying the latest night vision and thermal imaging equipment. Recently, I’ve found that some keepers and farmers in Fife prefer the more covert methods of controlling foxes, rather than shining a lamp around the fields and disturbing neighboring farms or people in the estate houses. Night Master has supplied me with the new Pulsar Apex XD75 thermal weapon scope, the Pulsar XD38S thermal spotter and the Pulsar N870 Digisight night vision scope with their Xsearcher infrared lamp - so absolutely no lamps involved.

Over the coming months I’ll be writing my foxing stories and giving advice on the methods and equipment that I find most effective for the tricky world of foxing.