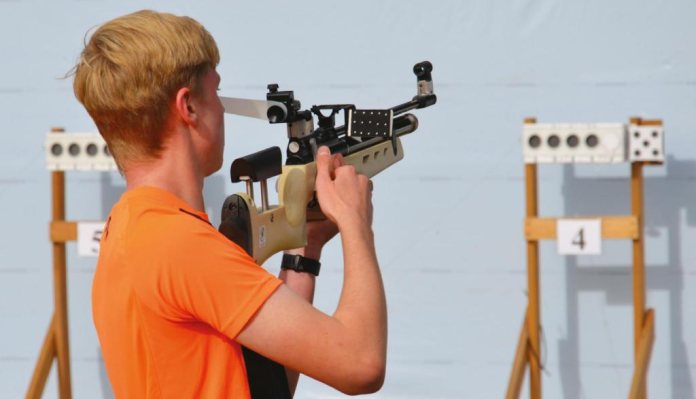 Outdoor airgun shooting has been around since 1980 incorporating the steady rise of Field Target (FT) and then Hunter Field Target (HFT) shooting. However, for those who wish to inject some serious athleticism into the equation, the relatively new discipline of Target Sprint (TS) is the answer.

This exciting discipline requires the competitor to run and then shoot and it is not only good for our health, but it obviously makes for a great spectator sport too. The rifles used are low-powered target models, such as the Air Arms MPR fitted with dioptre sights. The rules keep things fairly standardised. Unlike Biathlon where the shooter carries the rifle, TS sees the competitor take their gun from the rack, shoot and then put it back and carry on running to keep things safe.

There are UK and International events, with the former requiring the competitor to run 400 metres, shoot five knock-down targets, run another 400 metres, shoot five again, then run the last 400 metres to the finish. All the shooting takes place from the standing position at 10m. The knock-down target disc is 49.5mm for national events and 35mm for international. Try and shoot anything standing after a brisk run and you’ll begin to grasp the challenge!

Top British manufacturer, Air Arms, have been the sport’s main sponsor in the UK and they now make and supply their own TS target box, which is a high-grade unit constructed of stainless steel for durability. In keeping with the sport’s requirements, the unit is a 5-port system. It incorporates the two disc sizes, which are easily switched by removing and reconnecting the pivoting paddles.

As the shot enters the aperture, the knock-down paddle inside falls, which then brings up the outer paddle to blank off that hole with a white plate. From the firing line, all the shooter sees is a black kill zone effectively disappear and turn white if the shot is accurate. It’s all wonderfully simple and works well. The target box can be floor or wall-mounted and is remotely resettable from the firing line via a waxed pull cord that comes supplied. It measures 20.25”(W) x 6.5”(H) x 8”(D) and at 13.4lbs in weight it’s clear that this multi-faced target is a robust unit. And designed to withstand many years of competition and as such represents a sound investment for any club or organization looking to take up the target sprint discipline.

For more information about Target Sprint, check out the website at www.targetsprint.com or www. britishshooting.org.uk