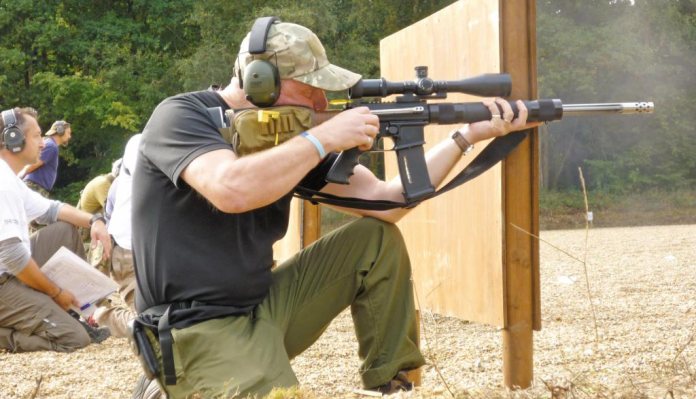 I thought it would be a good idea to put Civilian Service Rifle (CSR) under the spotlight, as it’s becoming more popular every year. The more ‘dynamic’ disciplines seem to appeal to more and more new and existing shooters; the equipment used is very sought after, even with those who do not actually compete. Traditionally styled rifles with blued barrels and wood stocks are still popular of course, but most manufacturers are now producing ‘tactical’ designs of one sort or another, often with alloy chassis stocks that owe more to military kit than the sporter of old.

CSR has its roots in the competitions that take place between military units, such as those down at Bisley. Soldiers need to be able to shoot accurately from a variety of positions, such as prone, sitting, kneeling and standing etc. The courses of fi re (COF) reflect these requirement, often after a run-down from one distance to another, to get the heart racing and the competitor out of breath. Civilians used to take part alongside the military, first with bolt-actions such as Short Magazine Lee Enfields (SMLEs) and then after World War II, No. 4s. Wen the L1A1 SLR was adopted, civilians were able to buy them and complete with the then current issue rifle and also Practical Rifl e (PR). This all changed when civilian ownership of fullbore semi auto rifles was banned by the Firearms Amendment Act of 1988, ably aided by our National Rifle Association (NRA) of the time’s denouncement of this sort of firearm.

This ban could have been the death knell for CSR/PR shooters, but we are a resilient bunch (we have to be!) and carried on with traditional military bolt-action rifles and later box magazine conversions of sporters. Armalon offered a series of guns based on the Remington 700, with better barrels etc. Accuracy International’s guns also became popular and from the ashes we grew again. However, the equipment dictated that the comps became more longer range sniper matches than the old CSR/PR comps. Pete Bloom B.E.M, a former Corps Master Weapons Coach in the Royal Marines kept the disciplines alive and when he died in 2004, other dedicated shooters kept it going.

However, many others missed the ergonomics of their self-loading rifles and purpose-built, ‘manually-operated or straight-pull’ versions of the AR15 soon started to appear. These had no self-loading ability, hence the name, but offered high capacity magazines and familiar shootability. The first examples came from Olympic Arms in the USA, popular no doubt, but they used the standard charging handle (T-handle) to cycle the action, which was far from ideal.

On a semi or full auto AR, the T-Handle is used to initially cycle the bolt and chamber the first round, after that and after every shot the rifle reloads automatically. In UK-legal format, operation is by the handle each time, which is slow, awkward and provides little leverage for primary extraction needs and also upsets your shooting position too. By this I mean enough effort to remove the hot cartridge case from the chamber easily and reliably.

However, Bob Clark (Southern Gun Co) offered his Speedmaster design that solved all that with an ambidextrous, side cocking system, and sorted out the problems easily including primary extraction issues. It was not long before other companies started producing, side-charging ARs of all descriptions.

I took part in a few PR comps in the early 2000s and even though PR and High Power competitions were still popular, CSR was really taking off. I think there were around 50 shooters at my first outing. But last weekend (the beginning of December) there were 144 on the line! This is quite some growth and it was a fantastic sight to see so many enthusiasts on Century range, despite the frost, ice and mud!

CSR has something for everyone, from the dyed in the wool traditionalist with classic service bolt-actions, to those with a high-tech and expensive, modern tactical or sniper rifles with high magnification scopes. In theory, any fullbore rifle that has a magazine capacity of 10-rounds, or more, can be used. I’ve seen some really unusual looking kit on the firing line, but a modern bolt-action or straight-pull of some sort it best. Matches are based on Army Rifle Association events, but the timings have been changed a little, due to the equipment now used by civilians.

Classes are as follows:

This is for any SMLE, No. 4 or No. 5 rifle; it must be ‘as issued’ (including sights), with no extra attachments, such as hand stops, modern slings etc.

This is pretty much any type of rifle, classic or modern, with iron sights fitted and there are no restrictions as to what is fitted, apart from bipods.

This can be shot with any type of rifle with an optical sight with a magnification no higher than 4.5x. A scope that has a higher magnification can be used, as long as it is only set to the required power. Sighting shots marked back from the butts must only be viewed on a maximum of 4.5 power. This also applies when targets are shown at the end of the course of fire; however, spotting scopes, monoculars and binoculars can be used in this case. There are no restrictions on slings, but forward hand grips and bipods cannot be used. Competitors can rest the base of the rifle’s magazine on the firer’s forearm or on the ground. Calibres allowed are only 5.56x45 and 7.62x51mm NATO only. Minimum trigger weight is 4.5 pounds.

Any rifle fitted with a telescopic sight of any magnification; there are no restrictions on slings, foregrips or bipods but these must be folded until the target appears and can’t be removed during the match. The choice of optic must take into account that the course of fire might have targets engaged at distances as short as 25 yards and as far as 600 yards. Minimum trigger weight is 1.5Kg.

Targets are either hand-held or framemounted and raised and lowered according to the COF. Handhelds show a ‘head and shoulders’ of a stylised soldier and can be large (Figure 12) or small (Figure 12c) types, or the one used in the McQueen shoot, called a Figure 14. Those mounted in the frame are usually triple Figure 11s, which are almost full-bodied soldiers.

Now, before anyone starts thinking that CSR shooters are all a bunch of wannabe soldiers, we aren’t, we are just ordinary shooters, male and female, who enjoy shooting from various positions and distances against the clock. The shape of the target is actually irrelevant, as the scoring zones are generally circular and just happen to be the military-style used at Bisley and other ranges. CSR is shot by people from all walks of life and you can be competing with doctors, tree surgeons, local government officers etc. and there isn’t a fantasist amongst them!

Unfortunately, there are gun owners, some of them well-known, who view us with suspicion, but that is completely unjustifi ed and sets law-abiding shooters against each other and that really must stop for the good of all disciplines! OK, rant over!

A typical comp can encompass a variety of positions and distances. One COF, is the aptly-named ‘500-300 Rundown’, for example, it starts prone at 500 yards, but you get two minutes to fire two sighters. These are then marked with an orange disc, to show you where your bullet has gone; hopefully in the centre of the target! If it’s high or low, you can adjust your scope’s elevation turret or iron sights to suit. If your shot has gone left or right due to the wind, you can either adjust your sights or aim off for the second shot. Hopefully, it should be bang on, dead centre.

The ‘Wantage’ sees a Figure 12 shown ten times either left, middle or right of the target position and the firer has to fire one shot during each three second exposure. Another popular COF is the 40-round ‘Urban Match’, where you fire at turning targets on Short Siberia, 10-shots at each distance. You start standing at 100 yards, where you use a wooden post as a rest to steady the rifle, you then move to 75 yards, where you shoot around a wooden barrier. At 50, your first exposure is standing and the second kneeling, before moving to 25. Here, there are three quick exposures and you have to shoot as many of your ten rounds as possible standing.

As you can see, CSR has a lot to offer and next month I’ll look at the types of rifle and equipment used in the various classes and what to expect if you take the plunge!