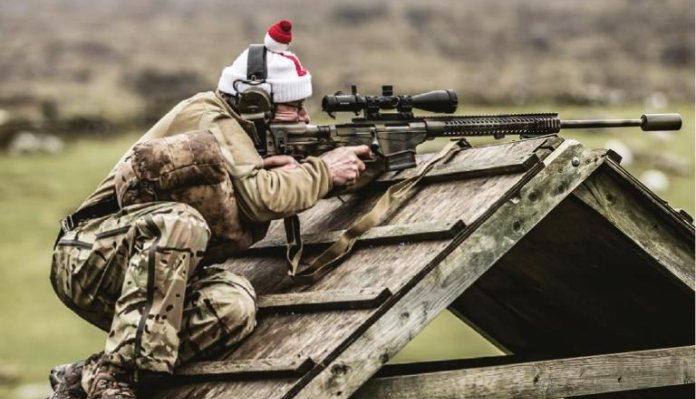 My 2020 competition season began on the last weekend of 2019, with the Winter Roundhouse Challenge. It provided a great opportunity to catch up with the Precision Rifle League (PRL) crew and, as the morning was a free practice with access to all of the obstacles, there was a relaxed atmosphere which let me get to grips with my Christmas delivery from Sig Sauer Optics. A new Oscar 8 spotting scope and a Tango 6 rifle scope! With both new and experienced shooters taking to the firing line and engaging targets out to 600 yards in very tricky winds, smiles and head scratching was rife. I buddied up with a first time visitor, former Royal Marine, Tommo. We had a great time figuring out how to approach a variety of obstacles and misses were thankfully rare, we ended up sharing my gun, as he was getting low on ammo. The call for lunch came over the radio, so we enjoyed a barbecue whilst sorting out squads for the afternoon.

Suitably refreshed, we headed out to the firing line for a small-scale competition designed to test us all. Before I left for the Roundhouse, I decided to only shoot the smaller of the two targets on a stage regardless. With some really small steels sticking rigidly to this made for a challenging afternoon and showed the importance of keeping a flexible approach to competition shooting! PRL League Director, Tiff Dew, used this shoot to trial new ideas for the coming season. Two of these I really liked were; starting with the magazine inserted into the rifle and the bolt open, in the rear position like the rest of the world’s precision rifle matches. With the small-time advantage gained by not having to insert a mag, the par times were reduced, the longest for a 10 shot stage was 100 seconds! As someone who likes the pressure of shooting quickly, I really enjoyed the challenge of shorter par times. The second was any gear/equipment was to be deployed on the clock, this means shooters have to re-evaluate equipment choices to streamline their approach for a stage.

For whatever reason I didn’t shoot especially well in the afternoon; I couldn’t get steady and, most unlike me, I made a few bad trigger presses, which cost me points every time! My favourite stage was a ladder, the target was a 7” gong at 644 yards, which was engaged with 3-rounds from three positions in 100 seconds. I shot last, having seen my squad mates fighting with the rapidly switching wind and struggling to see their misses. Despite missing my first shot, I’d got a good enough position built to see the splash, which allowed me to make a correction and hit my second and third shots. From the second position, I rushed building and made two bad trigger pulls, which caused me to miss. I rebuilt the position to make sure I made a good shot and saw it connect with the middle of the gong. As I got into the third position, I was solid. With the RO calling 15 seconds left, I let off 3-shots in quick succession, watching some of the trace of each and impact with seconds to spare!

The highlight was shooting plaster Unicorns at 100 yards, the wind was whipping across them and once hit they were spectacular! Top spot of the day went to 2019 PRL champion Josh Martin and pleasingly, despite a bad day, I placed second, with Jack Crawford third. A great way to round off the year with friends and some friendly competition.

Building on my previous weaknesses, I’ve been doing lots of one-shot drills, both on paper and steel targets; this involves getting into position, taking a shot and coming away to repeat the process. The idea, to help me increase the amount of first round hits, rather than relying on my ability to make a good correction for the second. Also, I’ve added time pressure by setting an alarm to go off after 20 seconds and am already seeing my groups on scaled down McQueen’s targets improve dramatically. To further help, my best mate and regular shooting partner has welded up some portable practice barricades for me, alongside using any available surface these will enable me to recreate commonly encountered stage obstacles and get more proficient dealing with them.

I’ve been looking at other improvements in my shooting processes to make the whole thing more efficient. I’ve accumulated a lot of accessories over the years, some are really useful, others have been resigned to the garage!

One of the big differences of the PRL, compared to most types of shooting, is that the cars are a long way away and everything needs to be carried to each stage. With three rounds being held in very hilly terrain, making smarter gear choices and keeping my rucksack streamlined will reduce the amount of effort needed to move around the course; especially with a planned super heavy match rifle to carry around!

I carry everything in an Erblestock rucksack, allowing me both hands free with the rifle in the scabbard. It also has room for food and drink, as well as my bare essentials as follows:

Ear and eye protection, Coletac Ammo Novel, it holds 90-rounds and takes up little space. Along with a pair of MDT 12 round AICS magazines and a 2-shot match saver, with spare rounds on the chassis, the ammo is taken care of. A Kestrel 5700 Elite weather meter provides all of the ballistics information needed to hit the targets which is the aim of the game. Area419 Pint-sized Game Changer, last season I used this bag 90% of the time, either as a rear or front support, it can be handheld or attaches to the forend with an ARCA mount. This bag lives up to its name and is a regular fixture away from the PRL firing point, really useful when shooting from a vehicle or resting on a gate. Another bag that’s useful, when required, is the Area419 Grip Changer, it’s light and very grippy, as well as being a much lower profile for a front support when low to the ground. A legacy from my airgun competition days is a target glove, which comes in useful for those times when shooting from a fist as forward support, or when extra grip is needed on a prop.

Also worth carrying, are extra Sharpie pens for scoring. I have a DOPE card holder, which is a miniature whiteboard that attaches to my scope rail and I’ll write my corrections on, as a visual reminder for multiple targets. There’s also a waterproof oil pen, so regardless of the weather I can see my DOPE. Most important, are spare batteries for my various electronics; these are kept in waterproof bags, along with soft tissue to wipe lenses. As a further back up to my Kestrel, I have a printed DOPE card for my drops, along with a paper and pen.

Alongside this, I have my tripod, which can be used for a rear support, as well as an improvised rest. Mostly, I use it for watching squad mates shoot through my Sig Sauer Kilo 3000 rangefinder binoculars. An extra set of eyes is useful to spot impacts, as scoring is self-policing and nobody wants to miss a squad mates’ impacts. Also, useful to confirm the target distance in the match book. Most importantly though, by watching where other shooters shots land, it gives an idea of what the wind is doing and any potential problems on the stage.

A small tool kit with a variety of bits, including extended ones for stock screws and small Allen keys for scope turrets. Paired with a SOG multi tool, this means that any minor mechanical issues can be dealt with on the line. My pre-match prep involves checking the torque of every screw, but these helped a couple of squad mates last year. Being as the British weather is changeable at the best of times, there’s still room for a Ridgeline Monsoon Elite smock, which is light and packs down small, making it ideal, JIC!

For things I need to hand when shooting a stage, I wear a Mil Spec Tailor shooters belt. Attached to this I have mag pouches and to store my AICS pattern Flagazine breech flag. I have a dump pouch on my belt, which allows me to quickly gather up my brass. PRL continues to go from strength to strength, with some rounds having sold out already. There is still time to sign up and get involved. Visit; www.precisionrifleleague.co.uk

Competing with some of the best shooters in the country and spending time with great friends old and new makes for an especially enjoyable competition.

Top tip for someone getting started?

Don’t be afraid to turn up with what you’ve got; yes, there will be people with all the gear but most of it isn’t necessary. Knowing your rifle and learning how to make the most of it will get more hits than any accessory!