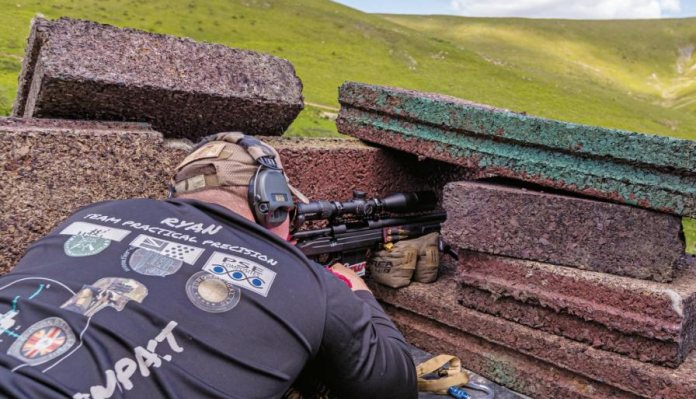 As well as the individual competition, there is a team element and I was lucky to be asked to join Team Practical Precision UK. This company makes all manner of shooting accessories, which are used by most of the shooters in the league.

In the run up to the first round of the PRL, the Sig Tango4 I needed to compete in the Factory Division had been delayed due to a large military order. Thankfully, my friends at business rivals Country Sports Wholesale and Vortex UK leant me one of their Diamondback Tactical scopes for as long as I needed. This is quite typical of the UK gun trade, although we’re all competing with each other, we’re all supportive of each other once the working day finishes.

Round One didn’t start well, as we got to Cornwall late! I got the chance to meet my teammates for the first time! We all gathered expectantly at the Round House Firearms Training venue and there was a real buzz about what was happening. Following the safety and stage briefs, we set off to shoot and I quickly discovered why my American friends take bags of sweets, water and coffee out with them. If things aren’t going well, nothing refocuses you like a can of coffee and some Haribos!

The scoring in the PRL works differently to the American NRL; at some stages, there are two targets, a big one and a smaller one, with the latter being worth 2-points and the larger just one. I formulated a plan to try and maximise the score. When assessing and planning a stage, if I felt I’d max out on the large steel, I’d shoot the smaller one confident that a 50% hit would match clearing the big boy.

My favourite stage involved moving from a seated position shooting from a tripod, to a large rock using a bipod. I managed to clear the stage whilst shooting the small target, as these are comfortable positions for me. I walked off the firing line feeling that I’d done some things very well and others badly. Surprisingly, I managed to win the Factory Division and recorded a fairly respectable score on a challenging course of fire.

The second day of the PRL weekend is an Extreme Long Range (ELR) challenge. This isn’t my cup of tea and, although my rifle is more than capable, I don’t enjoy shooting prone as much as I enjoy the pressure of the time constraints and problem-solving element of the courses of fire. Luckily, it’s shot in pairs, so I joined forces with fellow Factory Division shooter, Tony, who ended up sharing my rifle, as he had a scope malfunction. I enjoyed shooting first, which meant walking the shots on target, for Tony to make hits and reap the benefit of him spotting, so decided that was how I’d treat ELR in the future. Between us, we won the Factory 6.5 class using my Howa Bravo and Tony was impressed enough after shooting it to go out and buy one as soon as his variation was granted.

Round Two was held at Gardner’s Guns two mile range in Scotland. Feeling suitably well-practiced and having had the course of fire emailed before-hand, I’d been able to formulate a plan of attack. My game plan was to use my Arca bag as forward support and my tripod as a rear rest, which creates almost bench rest stability. Unfortunately, as we approached the first stage it was decided that no tripods could be used as a shooting aid, so I planned each stage again as I approached it. My favourite stage was shot from a jiggle bed, which is a suspended platform that amplifies any movement with wobble. Seeing as both my rifle and I are heavy weights, this helped keep movement to a minimum and, despite the bed moving a total of 8 mils of elevation, I was able to ambush the target, hitting 8/10 in under 60 seconds with a magazine change included. Again, I managed to win the Factory Division and, in doing so, I put in a score good enough to finish in second place overall behind my good friend Josh Martin. This was a major confidence boost for me in the PRL, as things started to click, and I executed my plans for each stage well.

Unfortunately, during the pre-match zero session, one of my teammate’s rifles suffered a broken extractor; as he wasn’t able to repair it, it meant he had to use a range rifle and ammo, which badly affected his score. As a result, I started keeping a more comprehensive spares kit for Howa shooters, to keep them in the game no matter what. So far this year they’ve not been needed.

The Extreme Long range day at Gardner’s changed last minute due to severe weather, into a mini king of a mile style event, with a detail of five competitors taking it in turn to shoot, starting at 200 yards and continuing to ring steel until the last one is left. As there were several shooters who were extreme long range specialists with large calibre magnums such as 338 Lapua and 300 Norma, big distances were expected. Due to the close starting distance, the big boys struggled to connect and to our surprise Ben Mcilwane and I reached out furthest with our 6.5 Creedmoors, me winning the Factory Division and Ben winning the Opens! With the best two PRL scores from five rounds to count, things were certainly looking up!

My build up to round three wasn’t ideal. I ended up having to replace my rifle three days before the event with a brand new one! This was made worse by the fact that I’d just had it Cerakoted Pink for charity by Tactical Coating and Practical Precision had made me some bright pink bags.

Unfortunately, practice costs barrel life and after over 2500-rounds, which were mostly 10-shot strings, the barrel gave up! Luckily, the replacement liked the same load and was just as accurate so approached round three, which was held at Orion Firearms Training with some confidence, as I’d been shooting well during practice. Bar some mental mistakes on a couple of stages, which cost me a lot of points, I shot well and finished just 6-points off the top Open shooters. My friend and teammate Alex White shared the win with Josh Martin. The standout stage for me was something I’d never encountered, as it was shooting from a strap and a chain, by keeping a neutral balance and focussing on a good trigger press I was able to hit the target 7/8 times.

For the ELR, I paired up with Ben McIlwane to shoot in the Open Division and we attempted to repeat our performances from the previous round. Sadly, due to targetry failures and how well the rest of the field shot, this wasn’t to be. However, we had a lot of fun and I enjoyed that day more than any of the others, due to the comradery of everyone participating.

In the short turnaround between rounds I had my rifle Cerakoted pink and in doing so managed to raise over £600 for the Royal Marines charity and the Hoplite Fund. The pink bags are being sent over to a deserving young shooter in America to use and hopefully they’ll bring them the same amount of luck they’ve brought me! At Orion, I noticed how well the fitter shooters dealt with the heat and walking uphill to the firing points; so, as well as my regular shooting practice, I started exercising in an attempt to improve my fitness for next year.

Round four saw us head to the Roundhouse again; this time, there were unknown distance stages, requiring range finding to be done without a laser rangefinder. I’d heard whispers about this before the match, so practiced the formula for ranging using a reticle and packed a calculator into my kit bag. My favourite was a stage which involved running down a hill into a trailer and engaging two hidden targets with a rifle on a tripod. Not being the quickest at moving over the ground, I decided I’d be the most spectacular and began with a commando roll any Spetznaz member would be proud of. Sprinting downhill, I only just managing to stop in time to enter the trailer, due to my momentum! As the only Factory Division shooter, I recorded a win, but most importantly with the best 2 from 5 shoots counting made it impossible for me to be caught with 4 wins from 4 shoots securing the Factory Division win overall. I celebrated with my friends and teammates, sampling some of Cornwall’s’ famous Rattler cider.

For the Extreme Long-Range shoot on the Sunday, I paired up with my teammate Karl Franks and we shared my rifle to compete in the Factory Division. Dressed in Hawaiian shirts, our plan (other than looking cool) was again for me to do the shooting first and Karl to spot with his spotting scope walking me in on target and gathering DOPE. Armed with a trued ballistics correction, Karl hammered the targets and we shot a superb pairs score and won the Factory Division category. Next month, I’ll talk a bit about the 22 rimfire version of this great new sport.