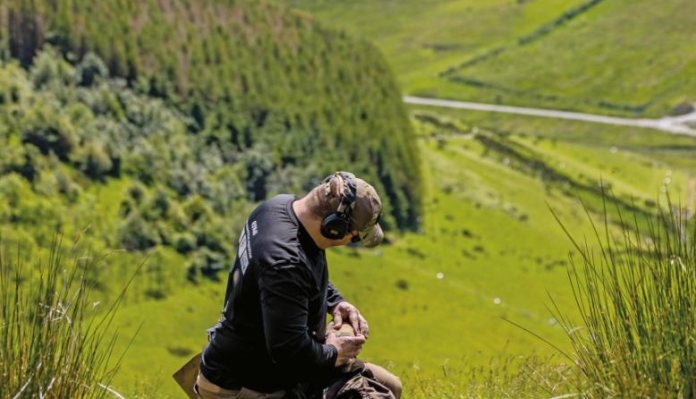 With preparation in full fl ow for round five, I took to using my 22LR for practice, to supplement my positional dry/live firing practice with my 6.5 Creedmoor and have begun entering a local, field-based 22 competition series called the Hunters Challenge. There will be a National 22 Precision Rifle League beginning in 2020, which, given the shorter distances, smaller areas and lower costs involved, has the potential to be huge, as it opens up lots more venues. So far, it’s been a terrific way to practice building solid positions and transitioning between obstacles.

Due to range bookings, the f nal round of the season at Orion Firearms Training, had been jigged around, with the ELR element being shot on Saturday, followed by the sponsors raffle and the Sunday being the final PRL round. Friday was offered as a practice day on the dark side of Orion.

Friday’s practice session was great, once the fog and rain lifted, to give enough visibility to allow shooting to safely commence. 16 of us, including a contingent of some of the top Irish shooters, helped each other out practicing on barricades and shooting targets out to 1500 metres in very strong, challenging wind conditions! Once the serious practice had taken place, the fun guns came out and we were ringing steel with a variety of guns from 223 straight-pulls to 45-70 lever-actions.

Saturday’s shooting didn’t go according to plan; unfortunately for us, the Welsh long distance walker’s association had planned their route right through the target area. For the extreme long range ELR competition, I’d talked in my friend and long range shooting specialist, Linus Isley-Ridge from Hadfield Guns, who’d recently returned from the 50 cal world championships and king of Two Miles at Baton Rouge. Although we didn’t get to shoot, we had a great time watching Ireland beat Wales in the Rugby World Cup warm up with the Irish shooters, before making our way to the sponsors raffle.

One of the things I enjoyed most at the NRL was the awards banquet and with around 50 of us taking over a function room in a hotel, the PRL raffle had the same feel to it. The British Shooting Industry is very generous when it comes to supporting the growth of the sport and the prize table reflected that with prizes including caps, rangefinders, rifles and everything in between. I was pleased to present a SIG Rangefinder to Jason Miller from Ireland and a Ridgeline Sniper bag to Gary Josey.

Sunday morning, we were greeted to a cold and damp start to the day, with the promise of sunshine to come and even the wind had calmed down. In the Open Division, six shooters were in with a chance of sharing the title with Josh Martin, so there was everything to play for. My fellow factory shooters had been practicing hard; although I couldn’t be beaten to first place, there were three people vying for second. Two of those were fellow Howa owners Terry and Tony, who have epitomised the great attitude of people in general, by approaching everything with big grins and a great attitude.

The firing line was split into two parts, the first was around the range at Orion, which involved engaging targets out to almost 1100 yards. My favourite stage here was shot from within a cabin, three shots on a 200 yard IPSC target from the standing position, before moving to take three more from a bench at a round gong 800 yards away. Then moving again, to take another three on the gong from a window sill. I also made a very costly mistake on a stage by not listening to a change in the briefing, I cleared 2 x 4 shot sections from the wrong position and that cost me eight points!

Heading up to the second firing point on the top of the hill, we waited whilst there was a lunch break and enjoyed the view as the sun had come out and treated us all to another glorious day at Orion. This section of the course treated us to some challenging targets, both with time constraints, challenging positions and steep angles. One of my favourites of the year was shooting from the far point of a tank trap, down into the valley at a 48º angle, having two of my squad mates stood on the tank trap to stop it tipping over took away some of the fear!

With the final shots fired, we all gathered around expectantly to hear the results; the day was won overall by Michael Ward, who scored a whopping 113 points to win overall. Terry Still shot a superb 92 to take his first win in Factory Division. Which was really pleasing, as he was also shooting a Howa in 6.5 Creedmoor and had worked really hard to raise the bar. Overall, the 2019 champion was Josh Martin, who’d been Mr Consistent throughout the year, Irish shooters Michael Ward and Rory Gibbons occupied the other podium spots. The Factory Division was dominated by Howa shooters occupying all three positions. Terry’s brilliant last performance saw him finish second, over his good friend Tony Hollard in third with me in first place.

The success of the inaugural PRL season has been enormous, it’s brought shooters together from around the country, who’ve all encouraged one another to keep pushing their abilities. I’m certain that next year the sport will grow and continue going from strength to strength. I’d like to see a larger uptake in Factory Division Shooters, I’m sure that with a skilled marksman a factory rifl e is more than capable of winning a round overall. My Howa is certainly capable of this!

The biggest take away from this years’ PRL season for me has been how much all of the extra trigger time has improved my shooting. Equally, the extra confidence I’ve gained through being well practiced will no doubt help this coming winter when culling deer and catching up with fox shooting on the estate. As well as returning to normality shooting wise, I’m already planning my equipment and timetable for next year, both at home and internationally. The welcoming nature of those I’ve met around the world means I’ll be happy turning up anywhere and knowing that I’ll be amongst a group of people who all want to hit the same targets and will encourage and help everyone to do that.