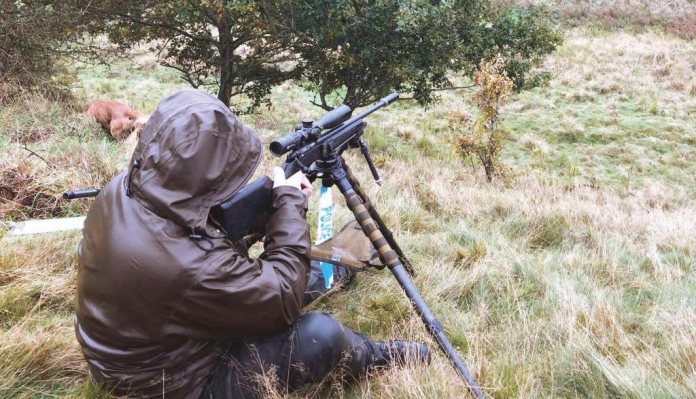 Following the PRL season finishing, I needed to get my Precision Rifle fix and luckily Tiff Dew arranged for one of the top American PR shooters – Scott Satterlee to host a two day clinic at The Roundhouse Firearms Training Facility. Fifteen shooters from all over Europe attended. It began with some classroom discussions, to establish the theory and discuss things in detail. The topics included everything from marksmanship fundamentals, reloading methods, rifle building and focussed heavily on environmental effects, along with how this affects ballistics. Armed with the newly acquired knowledge, we went to the firing line to establish a precise zero and begin the process of truing our ballistics data. Given that this is a skill and therefore key to pointing the rifle in the right place, it’s crucial that this data is verified and proven; let’s not forget, the only good data, is proven data.

The data in my Kestrel weather meter had been good all season, so at 600 yards I was able to establish that my muzzle velocity and zero was spot on the water line, showing no variances on the vertical point of impact. We made our way back to the 1000 yard firing point and we spotted that my impacts were slightly higher on the target than the aim point I took. This shows that the bullet hasn’t slowed down as much as predicted, as it has a higher ballistic coefficient (BC) than I was using.

With that corrected, we moved to 1100 yards and, with the data in my Kestrel now ‘trued’, I made a first round impact dead centre on the target and repeated it to prove it wasn’t a fluke! With the rain and fog coming in to restrict vision, we retreated back to the classroom, to wrap up what we’d learned. The Saturday night involved a barbeque and social, with shooters from Norway, France and all over the UK in attendance and a great time was had by all!

The second day began with a hike to the 1200 yard firing point for a quick confirmation of the data we’d collected the previous day. Full of confidence, the group moved downhill to the barricade firing point for the Precision Rifle aspect of the clinic, where Scott shared his wealth of experience on tackling these obstacles. Some of which, included using a tripod for a rear support, or a bipod to act as a barricade stop and lock everything in position. As well as dealing with restrictions that old injuries and medical conditions place on individual shooters.

Following the general overview, we split into smaller groups, to help each other figure things out and problem solve, with Scott offering his insights. Everyone made plenty of impacts and improved as the afternoon went on; pleasingly, this was from barricades that are used regularly at the Roundhouse. Training opportunities like this are rare in the UK and everyone who attended had signed up immediately, for good reason. The entire weekend was a gathering of like minds, everyone took lots of great information away to help improve and practice for the next competition.

In my case, this was the Pennine Tactical Cup, held at Diggle Ranges on a Sunday and Monday late in October. Never one to miss a chance to fill a weekend with shooting, I arranged to shoot a local rimfire competition, named the Squirrel Cup, on account of all of the targets being Squirrel-shaped. With the PRL22 due to start in the next season, lots of shooters are looking for a 22 rifle to go with their centrefires and this has been the perfect way to practice positional shooting.

In very heavy rain and strong winds, a small group of hardy shooters turned out to engage Squirrel-shaped gongs from field positions, out to 240 yards dotted around a stunning setting in North Leicestershire. The competition was a wash out, as the rain dissolved the score cards, however our spirits weren’t dampened. We all had a great time and made a surprisingly large amount of impacts, which was a good confidence boost for our journey to Diggle. At the beginning of the new year and season, the Squirrel Cup will be evolving into a league; whilst remaining true to its field shooting roots, the rules will remain simple, with an emphasis on safe fun.

After stripping and drying out my rimfire and the rest of our clothing, Alex and I spent the Saturday night in our Air B n B, with the fire on, performing dry fire practice, to get ready for the next day. This competition was totally different to anything I’d done before, as it was more of a sniper-style competition, with the targets being a mixture of steel plates and paper. Alex is a veteran of this style of competition, so gave me some new ideas to try, like dialling wind to keep the point of aim in the centre of the target instead of holding off like I usually do.

After signing in as a guest at the club, being assigned a shooter number and listening to the safety brief, the field split into two groups, one in the butts and the other shooting. After my first experience of butt’s detail I was excited to shoot the first stage, as it was 10-shots from the sitting position using a tripod, which is something I’m very comfortable with, so expected to do well. One thing I never usually do is try something for the first time away from a practice session; however, excitement got the better of me and I dialled my windage correction.

Unfortunately, I also held off for wind like normal and by not noticing until I had almost completed my 10-shot string, didn’t get off to a great start! The next stage we moved from 200 to 300 yards, to take 10 more from an oil drum, at a McQueen’s target. I added to my bad start by not resetting my windage turret and holding off, doh! Following my first shot, I chastised myself and reset the windage turret on my scope, so that I could carry on as I usually would, to try and recover some points!

The final two stages used steel targets at 400 yards, which is more my thing, as the instant feedback from how the steel reacts when hit, gives information on what the bullet is doing in the wind. Following a quick lunch break, our group started off with a PRL-style stage involving 5-shots from a roof top, a mag change and five from a tank trap with a time limit of 2 minutes. Pleasingly, I cleaned the stage in just over 70 seconds, which in a tricky wind had caused a lot of the good shooters some issues.

The other stages went well for both of us and the final one saw us dress back to 600 yards to engage the steel plate with 10-shots, all of the shooters were in a line in number order. With Alex next to me hitting with every shot, I had a tough act to follow as the last shooter of the day, thankfully I made every shot count making 10/10 hits on target. As the competitors tidied away the obstacles and barricades, the competition organisers tallied up the day’s scores, a small group of us waited in the clubhouse for the standings at the end of day one.

Alex was in second place by just 5 points, having gifted 50 to another by shooting the wrong target. My strong performance on the steels got me into fourth place, despite my earlier windage dialling errors! With the guns safely stored, we had a quick shower and change, before meeting up with the other competitors at a local Indian restaurant for dinner and some story swapping!

Day two was far more technical, being 100% paper targets, which aren’t something I ever shoot past 100 yards to establish a zero. We began with an 800 yard cold bore shot from the prone position without a bipod in 30 seconds. Next we at 900 we shot animal silhouettes and at 1000 had a small group challenge. Sadly, for me, the Diggle wind hampered me all day, switching around either side when I was attempting to shoot the kill zone of the silhouettes, but heart breakingly pushing a shot out of the scoring zone and zeroing any points from what would’ve been the smallest 1000 yard group of the day!

As we waited for the scores to be counted, the more experienced shooters had climbed the leader board, with Alex dropping to sixth place and me to eighth. Driving back, we talked about how we could improve for next time, shooting paper had exposed some big flaws in my technique, so I needed to practice far more on such an unforgiving target. Away from the competition circuit, all of the time behind a rifle has had a pronounced effect on my regular fox and deer shooting. The ability to get an accurate shot off from an awkward position quickly has kept pheasants safe and the freezer full.