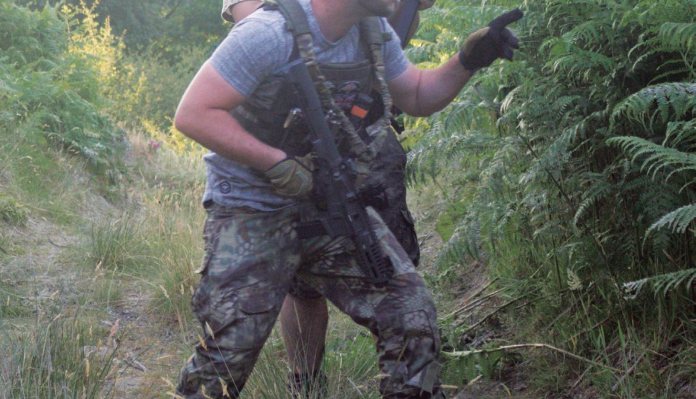 The area around Gloucester is a great place if you’re an airsofter as, not only do you have perhaps a premier indoor site in the form of Strikeforce CQB at your disposal, but just down the road you have the mighty Redwolf Airsoft shop just awaiting a visit. Redwolf suffered a major fire not so long ago, but the guys are getting back into full swing now; not only are they one of the best-established airsoft retailers in the UK, but they also have a vast inventory! If you can’t find it at Redwolf, then it’s honestly not worth having!

Heading on towards Birmingham, there are yet more sites to dabble with, both CQB and more traditional woodland, along with one that was a former Top Secret underground military complex; so, if you’re in need of an ‘airsoft fix’, then between them they’ve most definitely got you covered!

When it comes to indoor airsoft, then StrikeForce CQB is most definitely a site that should be on your ‘tick list’, and probably at the very top of it! Set up by my good friends Paul and Steve from Swindon Airsoft, along with the larger than life Paul Bibby, StrikeForce CQB really paved the way for those that followed; based in Gloucester city centre, it’s the largest purpose-built indoor airsoft arena in Europe, boasting a football pitch sized playing area of 52,000+ square feet in an old sugar mill.

StrikeForce is run by experienced Marshalls, who’ve all been around the game for a while, who see airsoft as more than just a sport, but as a social event where anyone, not just players, can turn up have a chat, learn about the sport and have a play if the feeling takes them. As well as having an absolutely stunning playing area, one where the layout can be, and is, regularly changed, StrikeForce looks to the ‘social aspect’, by having a larger and more comfortable Safe Zone than most, which also includes free tea and coffee for players and a Tuck shop on site!

RIFs and gear are always available at their on-site shop, both to buy and to hire; anything you need, just ask, as they are always happy to bring orders to site from the extensive Swindon Airsoft retail store. They’re also a UKARA registered site and happy to register new members who attend their game days.

As well as regular game days, StrikeForce have also been home to the Airsoft Surgeon World (Practical) Shoot and to the Airsoft Showcase in the past, but ultimately if you like your adrenaline fix delivered in huge chunks, then StrikeForce CQB could well be the site for you!

Please note that StrikeForce CQB is a single shot or semi-auto site only, with a maximum power level of 340fps on a .20g BB. Full face protection is recommended!

The 50-acre site is in Blakeney, overlooking the River Severn, and has many facilities including toilets, car parking and lockup for valuables. The site itself features varied terrain, which makes every combat zone unique. Players will pit their wits against each other, trying to outwit and out-manoeuvre the opposing team.

The games played have different objectives and scenarios; it is down to you to achieve your particular task, without getting shot by your opponents! Forest of Dean Airsoft has many different games and objectives to offer you, keeping you thoroughly entertained throughout the day. Some of the objectives include capture the flag, VIP, last man standing, assault the bunkers, CQB, flush out snipers, and disarm the bomb, to name a few.

Although games take place in the woods, there are also numerous ‘headline’ features to play in and around; these include The Fort, The Missile Site, a Stronghold, Trench Warfare at the Rat Trap, CQB in the Cabins, and even games that involve taking control of an old coach!

Rushock Trading Estate on the
A442 between Kidderminster and
Droitwich Spa in Worcestershire
T: 01386 6413356
airsoftcommando.co.uk

Ram Training is the parent company of Zombie Boot Camp, The Asylum, Prison Riot and now offer the all new, UKARA-registered, Airsoft Commando site. Ram Training has been going strong since the beginning of 2010, when they were the first company in the UK to offer immersive horror; since 2012, 42,000 people have attended one or more of their events, so they know a bit about customer service and offering great experiences!

Airsoft Commando offers an extensive urban site with outstanding facilities. In conjunction with their site designers and recommendations from seasoned players, they have crafted fantastic play areas that can be used in a range of airsoft scenarios and, by being undercover, they can play throughout the year and by day or night.

The site benefits from a purpose-built hanger to allow players to arrive and prep equipment, offering vending and a hot brew. The hanger is a safe zone where all briefing and debriefing takes place, and there is another hanger set out with a pipe range to test fire your equipment and for players to rehearse scenarios. This Airsoft site is completely indoors, comprising of a total play are of 22,000 sq. feet over two levels.

Zone 1 has audio support to enhance the experience and improve control. This zone also has the ability to smoke out areas and add mood lighting to add the edge to game play. Zone 2 looks like a film set from a war film, with shattered car hulks and debris littered throughout the site. Zone 2 has its own hanger for use as a briefing area and safe zone. Sitting in the middle, is an additional 7000 sq. ft. skills house, again with its own integral sound and lighting system.

By night, the atmospherics take Zone 2 to an all new level, not experienced by many airsoft players. They can add fire, smoke and screaming casualties to take airsoft to a totally new level of extreme game play!

Now, I’ve yet to play at Airsoft Commando, but reports from friends have been entirely positive, with one telling me “On arrival, you’ll be surprised by the scale of what they have on offer!” Sounds good to me!

Airsoft Commando games given their ‘close in’ nature are capped at 350fps on a .20g BB
SNIPER: 500fps MAX
SNIPERS: subject to minimum engagement distance

First and only, the outpost

First and Only operate a wide range of different style games on sites throughout the UK. Their sites give you the opportunity to ‘get your airsoft on’ in a wide variety of terrain, from dense woodland to full-on urban; I’ve had the pleasure of playing on their ‘Anzio Camp’ site in Staffordshire and this is a proper former MOD site that offers a superb day out.

Drakelow Tunnels though, are a former Top Secret underground military complex beneath Kingsford Country Park north of Kidderminster, Worcestershire. In 1961, the British Government converted half the tunnels into a top-secret facility, designated: Regional Seat of Government 9 (R.S.G. 9). Drakelow, along with 12 other facilities scattered across the U.K. formed a national network of highly classified Nuclear Bunkers, that the British Government would operate the country from, in the event of Nuclear War. In 1993, the entire complex was decommissioned and sold.

First and Only hold airsoft events regularly at The Drakelow Tunnels, usually the second and fourth Sunday of each month. You can experience close-quarter battles in the old Rover Shadow Factory, as well as 20-acres of woodland above the complex. From hostage rescue to CQB and full-scale assaults, Drakelow Tunnels offer the most realistic settings for any simulated combat experience in the U.K. it is also the largest underground site in the U.K. for airsoft and the only site in the country to be housed inside a genuine Cold War Nuclear Bunker!

If you fancy something quite out of the ordinary, even “extra-ordinary” then Drakelow really needs to be on your airsoft agenda!

I’ve picked these sites as I’m sure you’ll agree that they offer a bit of everything when it comes to airsoft games, from regular skirmishes through to full-on hard and fast CQB. All the sites listed offer a great airsoft experience, and if you’re a new player or someone that fancies having a go at airsoft then they all provide hire packages that include an eye protection, an AEG with magazines, and BBs. Some will provide protective clothing along with hot drinks and lunch too, but check their websites for details of what is included, along with game day costs. All the sites also have busy, regularly updated Facebook and other social media pages, which include photo galleries of both the site and past games, so these are well worth a look. If there are new sites that I’ve missed, then please do feel free to contact me and I’ll endeavour to add you in a site update at a later date!