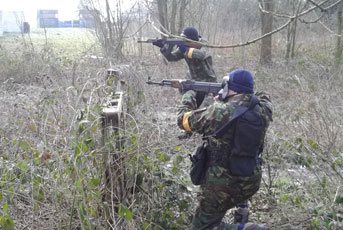 OK, it’s 5.30am my motley assortment of kit is ready to go – oh and its minus 8 degrees outside! Unable to resist the siren song of airsofting on a frosty morning I drag myself to the car praying that the forecasted snow holds off for just long enough for me to get there!

Today’s sub zero destination is Tactical Warfare, a woodland site based in Croydon who have kindly invited me down to put them through our rigorous site tests! Tactical Warfare is a fairly new site which was opened in 2009 by owner Simon Savyell who also has an Urban site based around 15 minutes from Croydon. Game days are run on alternate weekends at both sites.

First impressions of the woodland site are promising as I’m being shown around by head marshal Rob - there are a LOT of obstacles, a village including an armoury, varying terrain and a massive quarry hole called the pit (not sure I’m looking forward to that one). I arrived back at the safe zone just in time to see carloads of hirers arrive – always a good sign that the sport is growing.

Tactical Warfare offer a first timers package where you can hire one of the site guns (AK47’s, 74’s and G36’s) a face mask, bb’s and a coverall for just £40.00, this proved so popular that owner Simon had to nip out to the shop for more hire guns –  please book in advance!

I saw a lot of two-tone airsoft guns and a great mix of both experienced players who had some fabulous gadgets (trip mine anyone?) and completely new players just along for the day. One newcomer asked me to shoot him… just so he would know what it felt like – let no one say I was unhappy to oblige!

The Pit and the Pendelum

Games kicked off at 9.30am and at a relatively tropical -6 things were looking up, we were split into two teams orange and yellow and our first game was a straightforward closest to the flag, which was easily won by the yellow team despite some suicidal runs by the kamikaze orange players -good times! The games continued in the same kind of vein – village clear outs, timed games and then the moment that I had been dreading THE PIT! The oranges were sent to the other end of the site to dig in and told that once they were hit to head into the pit for a Rourke’s Drift style last stand – I breathed a huge sigh of relief as I had imagined that we would have to climb the sides and storm the pit (got to love those health and safety regs).

The whistle went and so did we – legging it through the woodland trying to flank the oranges before they could get under cover, within 10 mins they were all in the pit and attempting to dig in, I’m sure you guys don’t want the details but I honestly felt for the poor guys in the orange sniper tower, they got completely hosed.

After an hour break for lunch I had to call it a day, the temperature had dropped to the point where even with 3 layers on I could barely feel my legs and despite being hailed as a massive wuss, I retreated into the caravan with a space heater to attempt to defrost. I was not alone, a few other players had also decided to warm up and a hefty debate over favourite guns and kit ensued – always a danger when you get a few airsofters in a room together.

I really liked the fact that the day was staggered for both morning and afternoon players. You had the option when booking in to either play for a full or half day and given the choice of morning or afternoon which I think is a major plus point for me as sometimes you really want to go for the day but just don’t have time. Tactical Warfare really do seem to cater for everyone with this.

All in all I had a fabulous morning at Tactical Warfare and will very happily return in warmer weather to play for a full day… As far as I’m concerned the only downside to the day was the snow hammering down just after I left and getting stuck on the motorway home!

For game day prices and dates check out the Tactical Warfare website www.tacticalwarfare.co.uk or telephone 0208 6651299 for more details.