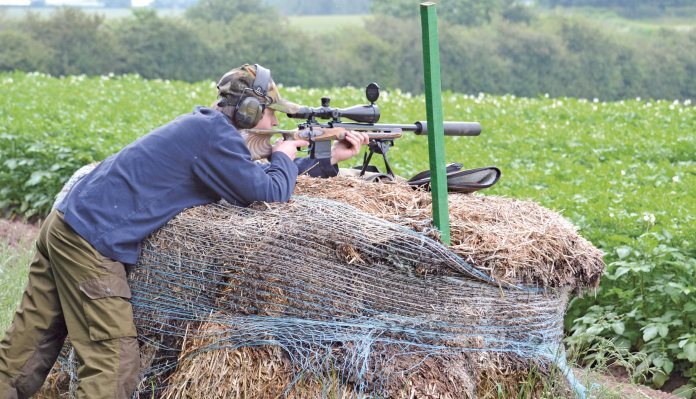 We all like to shoot as much as we can, either when hunting or at targets, but there are a growing number of riflemen keen to explore the capability of their equipment and learn more, especially about ballistics and shooting from different positions when hunting. Official target ranges are rarely the place to put some of the theories into practice and although many hunt over land, copious amounts of practice gunfire can be aurally antisocial in increasingly urbanised areas.

Catton Rifle Sport is based in South Derbyshire on the Catton Park Estate near Walton on Trent where shooters wanting to safely learn more in a real hunting scenario can do so. A one off £20 fee per day gives access to safe shooting with no restriction on the number of shots fired or noise created. Paper animal cut-outs are presented out to 150 yards to be engaged safely from prone, standing, sitting or kneeling positions. Regular ceasefire intervals allow everyone to walk out to the targets, spot their groups and patch up, ready for the next set of shooters. Longer range shots are offered with clay pigeons and steel plates out to 450 yards that can be engaged, mainly from standing positions using round bales as shooting supports but there are several prone locations too.

Rimfire shooters are not left out as there is a specific range for their use with 10s of steel spinner targets, all set amongst trees and small bushes to replicate the nooks and crannies rabbits like to inhabit. For those wanting to establish a benchmark, a 100 yard firing point is in place at the centre of the layout with plain paper targets to establish zero or do any required load development. Although there is a bit of slope on some shots, it is more of an aiming/positional test than a ballistic complication to compensate for it.

The atmosphere at Catton is very informal and no longterm membership is required. Hot and cold drinks and snacks are available from a catering van and as much time can be spent chatting with like-minded riflemen as actually shooting.

A safety briefing is given at the start of the day, although no formal start time is in place and anyone arriving later on is given their briefing separately.

Marshalls control all firing points as well as entry to the field course. This is a separate layout that shows shorter range targets off a track through woodland. Spotting targets is as much of a challenge as hitting the mark, with short ranges mixed in requiring aiming compensation. A zipline target is also present that traverses through trees offering the chance of some freestanding driven shooting — always good fun!

I have been to Catton three times as it is an inexpensive and enjoyable day out, both socially and for rifle testing. The targets on offer are testing for sporting rifle shooters keen to learn more without encouraging irresponsibly distant shots on live game.