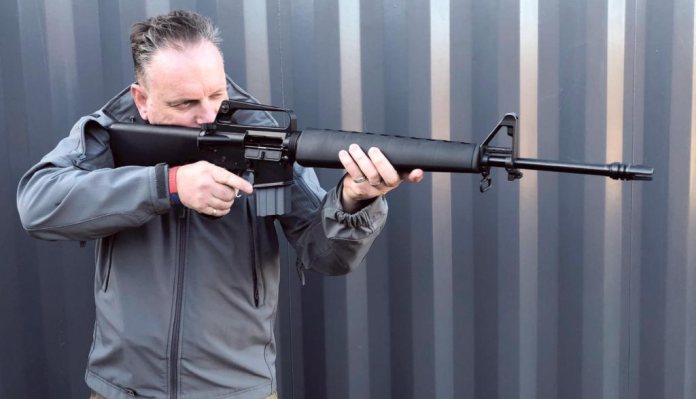 I can’t believe that it’s a year since I first paid a visit to the Silverstone Shooting Centre! I know time flies when you’re having fun, but it really seemed like less than six-months ago that I visited. In case you’ve not heard about John’s venture, it’s worth a quick re-cap.

John owns Thorney Motorsport, a successful business that has been tuning and servicing road cars as well as building and running race cars since 1999, making them one of the most established tuning firms in the UK. They work on high specification Vauxhalls and BMWs and can also work on your McLaren, if you’re lucky enough to own one!

A few years ago, whilst searching for new premises, where he could live as well as work, he came across his current location that came with a sizeable plot of land. As a shooter, he decided that building his own range would be a good idea but, being the astute businessman that he is, thought that it could actually make a viable business in its own right.

Well, after numerous planning battles, noise tests and shifting tons and tons of soil, he ended up with an extremely impressive range complex, where licence holders and those without a licence can shoot under supervision. Individual lanes or a whole range can be booked and there is no calibre or muzzle velocity limit, although moderators must be fitted to reduce noise. The large earth banks running along the sides or the ranges deflect sound up anyway but with moderated rifles you wouldn’t know that the range was in operation from outside. Those without a licence can take part in an ‘Experience Day’ and they can shoot a wide range of firearms under the supervision of fully qualified instructors; all safety equipment is supplied, so it’s a very comprehensive package. So, anyone who thinks that shooting might be for them can see if they actually like the sport without becoming a member of a club first. Corporate and team building events are also popular, with shooting, axe throwing and crossbow shooting!

There are two 100-metre ranges and three 50-metre ranges with turning targets at 10m, 25, 50m and 100m, with high-quality cameras hardwired to HD monitors on the firing point; it really is a great system! There is also a 50m running bore target available.

As well as being a commercial shooting range, Silverstone Shooting Centre is a fully Home Office Approved Club, which is run as a separate entity with a membership committee etc. and, once someone becomes a member, they can apply for a firearms certificate (FAC) after completing a six-month probationary course. As the venue has Registered Firearms Dealer (RFD) status, ammunition and firearms are available in the shop.

When I visited recently, I was really impressed with the new 50-metre air rifle range, which has become very popular. It offers a wide range of knock over and spinner targets spread across the range and there are 350 separate targets to shoot! There are six covered firing points and users can shoot from the bench using the height adjustable seat or shoot sitting or prone; the benches are suitable for both left and right-handed shooters by the way. A camera is focused on the paper targets 50-metres away, which is perfect for checking long range accuracy, with a crystal-clear view of how you’re doing, thanks to the 32-inch HD monitor. The air rifle range is £10 per hour during the week and £15 at the weekend. I can see it becoming ever more popular and a great way for people to work their way up the shooting ladder if they so desire. Others will be more than happy to stay with air rifles though.

At the beginning of the year, John asked me for some advice regarding air rifles etc. and I took him to meet several companies at the Northern Shooting Show and I’m delighted that the company I took him to see first have entered into an agreement with him and the centre is now BSA’s official range partner and they will be using their facilities for product testing, sales meetings and product launches etc. Silverstone will also showcase the complete range of BSA air rifles and associated products and they are currently available for shooters to try on the range and, if they like one enough, can order one for themselves. BSA’s Jon Hatton has also informed me that there are several ‘mystery collaborations’ planned for 2019! That all sounds rather cryptic and I can’t wait to see for myself what they are. The BSA air rifles look great in the shop and I got to try a few out for myself; well, it would be rude not to! Jon took several members of BSA staff to the range in December and they were all very impressed with what the facility offers. It looks like the BSA/SSC partnership will be great for all concerned.

During my visit, I also got to meet Rob Chapman from Guncraft Ltd. Rob is based in Ruislip in London and builds some really tasty AR style rimfire and straight pull rifles; I absolutely loved his classic looking ‘M16’! He only uses quality components and the fit and finish is spot on; he can fit side charging conversions, but I must admit that the ‘old school’ T-handle only replicas certainly look more authentic and, if they aren’t going to be used in competition, they might as well stay as Eugene Stoner intended. Look out for a review of one of Rob’s great rifles in Gun Mart soon.

Well, it was great to visit John again and it looks like his investment has definitely paid-off and he has a fantastic set-up, which will be great for all sorts of shooters from near and far. GM