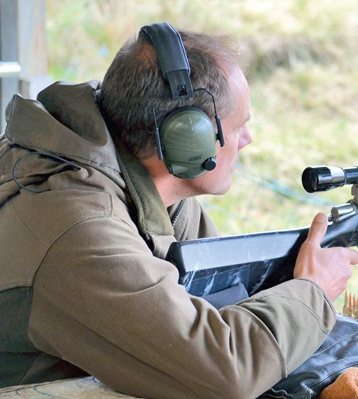 Benchrest is a term bandied around whenever it comes to judgements of relative accuracy and often the real world effectiveness of a rifle but what are these benchmarks and how are they set? 100 yard benchrest is without a doubt the pinnacle of achievable accuracy in man- portable rifle shooting. Although many consider it with disdain and say it is too easy, believe me it isn’t, because anything you can do, someone else can do better as the rulebook is very strict on competition tools and formats. Essentially a 100 yard Benchrest shoot is a competition where you lay down a 5-shot group in a seven minute timed window and repeat this five times throughout the day for an aggregate scope of five groups. Groups must be within the scoring circle of the target and are measured centre to centre by one judge, and everything gets totted up on a spreadsheet to average out all the decimal places and find a winner… sounds easy, read on.

Guns are bracketed into two categories for competition use and are either light `race guns` at sub 10.5 lbs or `heavy guns` at 13.5 lbs or less including scope. In the US where the sport originates (as do most things shooting) the aggregates are often done in multi gun formats and usually at both 100 and 200 yards. But in the UK we usually stick to one distance per day/event. Any rifle can be used so long as you are happy fitting into a class where you might be a little left behind accuracy-wise! I say this as all competition guns are hand built into very close tolerance actions with the finest quality of short fat match barrels fitted to actions often bonded into the stock, never mind bedded and bolted.

Scopes are whatever you prefer for magnification/reticule though capable of aiming realistically with ZERO error at 100 yards and the triggers usually weigh ounces, not pounds. Cartridges like the 6mm PPC are the cornerstone of the sport as they have the intrinsic accuracy available to them in spades. Add in very modest recoil and frugal powder usage and that holy grail of many of us speed is nothing; it’s all accuracy, accuracy and more accuracy here.

Reloading is mandatory and most rifles are chambered with tight necks that not only requires the PPC brass to be formed from its parent 220 Russian case, but also have the neck and shoulder junction skimmed in thickness to allow the most consistent neck tension possible. Leaving just enough room for the pressure of the combustion to expand that neck approximately 0.004” to release your bullet.

Bullets are typically soft-seated with minimal neck tension allowing the throat, lead and lands of the rifling to act as your seating die and therefore uniform every round as it enters the chamber. Competitors may have eight or nine rounds at the bench with them but will often foul the barrel (benchresters are narcissistic barrel cleaners for good reason) with a couple, watch the wind with another two and then watch the wind patterns with their head high over the stock. Finally waiting for what they consider a condition that will last long enough for them to machine that gun and send five shots away quick-sharp before the wind changes. Most will reload these few cases over and over again after assuring themselves of their small batch consistency and therefore all reloading work for the comp will be done on the day at the range.

Load development is done prior to comps but on the day, shooters may adjust and tweak powder charges to accommodate temperature and weather conditions. Interestingly they rarely ever weigh charges, preferring to simply throw volumetrically from high quality measures like the Harrel. A wide accuracy node is key, extreme spreads are nice but at short range, not the factor they are considered at long range!

Shooters will use a machine benchrest with either wheels to dial in windage and elevation adjustment or some might use a joystick rest. But as point of aim shouldn’t really change shot to shot, these aren’t as common as in F-class. A rear bag allows the gun to be aimed solid and ride it as free recoil is the name of the game. The only place a shooter touches the gun is the trigger, the gun goes bang and slides freely, often a couple of inches to allow the bullet long gone from the barrel before the shooter has any chance to influence the shot when it stops as it bumps your shoulder. You could say ‘that isn’t shooting’ and I have to say I’m no benchrest shooter myself. But as it is at 600 yards, control of a gun is paramount and the handloading consistency standards applied are beyond belief. However, in the right hands, these guns deliver 0.25” groups for breakfast at 100 yards and further.

SCREAM IF YOU WANNA GO FASTER!

You seriously need to move into the 0.1” realm to start getting competitive on a still day. Anything below that threshold is known as a ‘screamer’. Over the last 30 years, groups have been consistently shot card after card in the 0.1” and screamer regions and this is where accuracy is really judged. Make no mistake though, the men and women by your side are all sitting watching for that 15 seconds of constant wind to rattle their bolt and trigger whilst nudging the gun back into `battery` with the shoulder between each shot.

Moving backers are normally used behind the scoring target to assure judges that 5 shots have actually been fired, which is a mark of how small the holes look on the target. Bearing in mind a 6mm bullet shooting a screamer leaves a hole no larger than 0.243”+0.1” i.e. 0.244” and in the real world, because the paper stretches and relaxes as the bullet passes through it, it usually leave a hole smaller than itself anyway!

Don’t knock benchrest, it’s a very different part of or sport and we should appreciate it’s their choice to shoot it but never forget that most of todays advanced reloading techniques come from this realm of alchemy! These guys don’t shoot `one-hole groups`, they shoot `one bullet hole` groups and the fact that at the end of a day, a man may lose a match with 25 shots giving an aggregate of 0.200” is no laughing matter!

Never be afraid of taking part, you won’t be judged on your rifle, just your willingness to join in! Also and you may not think it reading this now; but accuracy is addictive and if that’s the case Benchrest is the drug of choice! As a serious shooter and reloader what I and doubtless many others like me think is a good group is positively risible by Benchrest standards; it makes you think a bit!