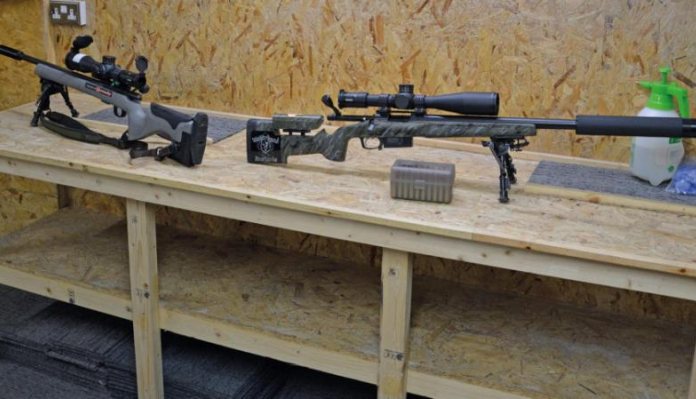 With assistance from the NRA, Baildon Rifle & Pistol Club have certainly spent their money wisely on a superb design layout for their new indoor 100 yard centrefire range. The NRA is set to use the range four times a year, but club members aren’t the only ones catered for. The ‘Richard Brook’ range is also available for private hire to current FAC holders wanting to zero, test and practise with their guns in a sheltered environment, away from the weather.

I have often found tubular concrete ‘tunnel’ ranges to be somewhat deafening and cramped but this range has been created above ground. It uses 40ft shipping containers to pre-form the 8ft square structure in a modular format, with specific attention paid to long term corrosion protection, sound deadening and plentiful internal space. The buildings at either end contain multi-layer shredded rubber and steel backstops with ventilation and a fire escape at the targets, but the showpiece must be the firing points. Two solid shooting benches are surrounded by workstations, plentiful seating space, an additional fire escape and a soundinsulated external waiting room. This is heaven for ammunition testing or load development, with controlled atmospherics to set your baseline performance expectations before going outdoors.

As well as plentiful car parking and kitchen facilities, I toured the rest of the club’s rimfire and pistol ranges, indoor and out. All safety and security have been modernised with bright lighting, well balanced throughout to minimise visual strain.

Although NRA assisted and club run, Baildon want to stay up to date with the times and the ability to privately hire the 100 yard indoor range is a progressive idea, especially for serious load development or rifle testing. Space for kit and people means no back-and-forth visits to vehicles and there aren’t any steps or ramps restricting access for those with disabilities, all the way to the targets.

Provisional pricing is £20 per hour, per lane, and I couldn’t resist taking a few shots while there. I was distinctly impressed by the sound insulation within the range, the lack of a returning pressure wave and the exceptional comfort as a shooter or spectator, behind the firing point. Both lanes have target cameras for real-time performance feedback and if you are not already zeroed, there are smart fold out benches and range chairs at 50 yards for initial rifle setup. The 8ft ceilings mean you aren’t restricted from any intervening distance or standing shots either.

I hope to use the range again myself very soon, the lack of any air movement, other than extractor fans clearing the air, leads to some deliciously small groups on paper and the large, bright volume avoids creating odd visual or ballistic effects as the bullet flies. Baildon is north of Bradford/Leeds, not far from the M62 Motorway.