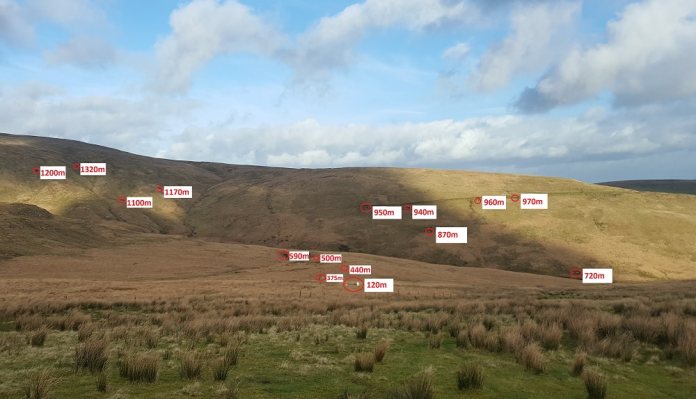 Three years ago, John O’Brien invited me to visit Orion Firearms Training, this first visit was the catalyst for me getting my firearms certificate. Not long after I got my first rifle, a .223 Mossberg MVP and I went back a second time to push its limits and have a go at the simulated deer stalk. Since then, two things have changed. One, I have become the proud owner of a Bergara B14 BMP in 6.5 Creedmoor and two, he has added a new piece of land to his territory.

The facility is situated amongst 5000 acres of the Welsh Cambrian mountains and designed for use by shooters for training, practice and fun. It is different from most ranges, not only because of the topography, and steel targets are used instead of paper. The benefits being, steels offer instant feedback be it audible or visual. There is no wait for a marker to show the point of impact and less time for the wind speed and direction to change, making them a highly effective training tool!

Orion is a success and popularity has soared, with a significant number of regular visitors, who have since become very good shots. This, combined with the continuing advances in technology, means that shooting at distance is becoming easier! Not necessarily because rifles have got more accurate or scopes better, but because of advances in bullet design and higher ballistic coefficients (BC). So, allowing modern projectiles to slip through the air more efficiently, holding on to more speed for longer, reducing drop over distance and more critically the effects of wind. Add in ballistic software meant the original range was becoming less of a challenge. To combat all these new advantages, John had to adapt!

Myself, my cousin James and a friend Mark would be shooting the new layout; we started the day with a bit of practice on the original range, to check zero and confirm our drops at shorter distances. It was a very windy day and we ended up shooting from two covered positions. At the first, we broke out the .223s to warm up. To our front at 760m we had the large pit, but we used the targets between 50 and 340m; there were multiple steels, including various sized gongs, crows, foxes, Muntjacs and clay pigeons. These, being quite small, offered up a good challenge due to the wind. After confirming our drops with a ballistic app, we soon moved further into the valley to increase the distances. The second position is low down on one side of a valley, with the targets positioned low to high as the distance increased from 100 to 630m. The furthest were high up on the other side of the valley and as a result they forced some steeply, angled shots, which affected cheek weld and eye relief. Here, we used various calibres and the distance, angle and wind made for some challenging shots, it wasn’t too easy! The high wind speed was not only influencing windage but elevation too, moving upwards lifting the bullet with it as it travelled up the side of the valley, but we soon got the knack of it.

After a debrief from the morning, we headed to the new territory and came to some completely different topography. In front, was a huge open expanse with a giant mountain in the background. John explained that not only was this site on a different wind line to the original range, but that the open ground allowed it to get up to speed, whilst switching direction and strength all the time. This was promptly proven with a wind vane that was positioned in front of us, it was going mad! To further add to the difficulties, there were no pits around the targets in the open and very small ones on the hillside, so spotting the fall of shot if you missed would be hard!

The targets started at just 120m away, allowing zeroes to be checked and rechecked after all the elevation and windage adjustments we would be making. The steels were positioned in the open and some consisted of a larger one like a figure 11 and a smaller 10” gong next to it. The distances were 375, 440 and 500m and would allow us to slowly increase the range to get a measure on the wind. At 590m there was a natural crater, which housed multiple targets including gongs and roe dear etc. It is from here that the distances started getting interesting, the closest target pit on the hill was at 720, with more coming in at 870 and various at around 950m. The far ones were at 1100, 1170, 1200 and 1320m! All these featured one 20” and one 10” gong.

For a visit like this, I always recommend bringing proven gear, as the last thing anybody wants is to find that something does not work, as too much time, effort and money has been spent by this point.

Mark and I brought equipment and ammunition with us that had been used at 914m at Bisley. Kit included a Bergara B14 BMP in 6.5 Creedmoor and a .308 Tikka T3 Tac in KRG Chassis. On top of the Tikka was a Bushnell Elite XRS and at the front a Wildcat Evo moderator, there was a Bushnell Elite DMR and a Wildcat Predator 12 on the Bergara. The Bushnells make sense, as they offer up 29 mils of adjustment and the moderators help make all the shooting a lot less tiring! James however had brought along a .223 Tikka T3 Super Varmint with a Vortex PST, Wildcat Evo and an unproven load. It worked though!

So, having discussed the distances and John having calculated the ridiculous wind speed to be gusting between 25-40 mph, we were essentially left to pick a target and crack on until we needed help. I was keen to gather as much data on my drops as possible with the BMP, so started at 120m, increasing the distance as I hit the larger target followed by the smaller one at each distance. The Creedmoor made short work on all of them out to 500m, with first round hits; however, those in the crater offered up the first real challenge, requiring more effort and some careful spotting. It was good to see that even in the high wind James was getting some good hits at the same distance with his .223. This was soon eclipsed however by his three consecutive hits on a gong at 720m, all with 60 grain V-MAX!

After all three of us were getting consecutive hits on at 550 and 720m, we moved on to a target directly in front of us at around 950m. We let John go first and watched as he loaded up his .308 with some tracer rounds and fire a few down range. They were certainly educational, as they showed the huge arc that the bullet takes on the way to the target, as well as just how much it drifts horizontally in the wind. James put his .223 away for this one and we all took it in turns to have a go with various rifles. I couldn’t believe that I had seven mils of windage dialled in and at that distance that equates to 6.74m of wind drift!

To add a bit more context, we even got out a Desert Tactical Arms bullpup rifle chambered into .338 Lapua. Once we had that dialled in, it would still take a pair of shots to get on target, none of us managed to get two consecutive hits, and that was firing a 300-grain bullet! By now, the light was drawing in but I wasn’t finished yet, I still had ammo! A few shots at the 1200m target with the Bergara and I was rewarded with the ring of steel. What a feeling and what a way to end the day, the more distant targets would have to be tackled next time!

If you are a keen rifle shooter you must visit this place! The addition of the new territory means that Orion Firearms training represents one of the premier shooting facilities in the UK. Having spent a lot of time researching and a lot of money buying all the equipment it is really enjoyable to find out what it is all capable of. More importantly, there are endless lessons to be learnt and experience to be gained, all strong words of praise I know but I have watched it improve over the years, as well as my shooting after each visit. I have also had the opportunity to see the enjoyment on the faces of those I have brought here and that never gets old! John has achieved his aim of offering more of a challenge to us and shooters of all skill levels, I had better buy some higher BC bullets!