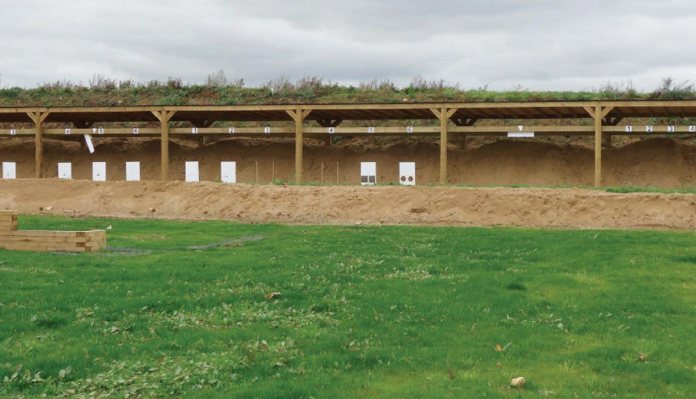 When I heard that someone was building a new rifle range in Bedfordshire, I initially thought, “good luck with that!” However, my scepticism was misplaced, as I’d not met John Thorne! The Home Office Approved Shooting Club and commercial shooting range opened recently and John invited me up to see for myself what was on offer and I jumped at the chance.

John (a trained barrister) has been involved with motorsport for many years, running Thorney Motorsport and specialises in BMWs, Vauxhalls and McLarens. Most of his business comes from word of mouth recommendation, which is a great way to be able to run a business. Several years ago, when he was looking for new business premises, he thought he might as well see if he could find a location with a house and workshop on-site. The property he found also included 30-acres of land, and once the car side of things was sorted, he thought about using part of his land to shoot on. This initial idea soon grew into something altogether more involved- a purpose built rifle range.

Now, most local councils are reluctant to have rifle ranges in their area, as shooting is seen by so many people as dangerous, sinister etc., etc. so it wasn’t going to be plainsailing. He also received a lot of negative comments from local people, with some quite outrageous claims being made against John and his proposals! Not one to back down against this sort of opposition, he paid a considerable sum for a noise survey to be carried out and on the allotted day, the sound measuring equipment was set up on the boundary of the site. One of the locals was in attendance and after a while rang John to find out when he was going to start shooting. John replied that he’d been shooting for over an hour! That pretty much proved that the range would not be too noisy for the locals but John still had to appeal when the council turned down his application. He subsequently won the appeal and work began around fiveyears ago. The centre is the first new fullbore range to be built in 52-years; so, well done John!

The range consists of three smallbore ranges, 50-metres long and two 100-metre fullbore ranges. They are situated next to large club room and restaurant and each range is divided by huge mounds of earth. The mounds were constructed using soil that would otherwise have gone to landfill, so it’s a very ‘green’ site indeed. Over 220,000-tonnes of material were brought on-site and it all had to be off-loaded and moved into position- this obviously involved a huge amount of work but nature has started to take over and by next year any bare areas will be fully covered with vegetation.

The well-lit clubroom is made from four large shipping containers that have had the middles cut out to form one large building and everything is insulated and timber lined. One end has double glazed doors that open onto the outside seating area, so it’s very light inside and a wood burning stove will keep things nice and warm in the winter. There’s a properly fitted out kitchen along one side and John’s wife serves great hot and cold food, including cooked breakfasts, rolls and sandwiches etc., as well as hot drinks and she also does great homemade cakes. John’s office is to one side but more about that later. Toilet facilities are around the back in an ex-British Rail Portakabin, so yet more re-cycling. John says that 99.8% of the materials used to build the complex are re-cycled, so it’s a very environmentally sound business. The exterior of the clubroom will soon be receiving a coat of paint to freshen things up and John is to be commended for turning some well-travelled steel boxes into a comfortable, multi-purpose building. Despite all the recycling, John has invested a small fortune in getting the range built!

The ranges are accessed by walking through concrete tunnels and all walkways are gravelled. The three smallbore ranges can be used for .22 rimfire rifles and pistol calibre carbines and Long Barrel Revolvers (LBRs) and there are turning targets at 10-, 25- and 50-metres, which can be used for a wide range of disciplines. There are six lanes per range and shooting takes place from inside converted shipping containers that have one side removed; once again, they are timber lined and there are comfortable shooting benches suitable for both right and left-handed shooters and height adjustable stools to sit on.

What I really like about the Silverstone Shooting Centre, which is also unique in the UK, is the fact that every 50- and 100-metre target has a camera hard-wired to an HD monitor on the firing point! I’ve only seen this in Switzerland before and John installed it at considerable expense. The investment has paid off however and zeroing is now an absolute pleasure. Reload evaluation, factory ammo batch testing etc. are all possible here and I can see this being very popular. Not having to call a halt to shooting to inspect targets, or squinting through a spotting scope are things of the past here. John can even keep an eye on things from the comfort of the office I mentioned before, as all targets are linked through, as is CCTV. This really is a hi-tech enterprise! If this little lot isn’t impressive enough, there’s also a 30-metre long track with a running boar target set up at 50-metres. John also showed me a scaled down McQueen castle that looks a lot of fun.

The two 100-metre ranges are set up in the same way, with the same style of targetry, cameras and monitors, and can be used for both rimfire and fullbore rifles but all fullbore rifles must be equipped with moderators, to reduce the sound levels. There aren’t however any restrictions on muzzle energy or velocity. As a keen Civilian Service Rifle shooter, this set-up could be perfect for the shorter courses of fire and would be an excellent venue for practicing, or even for an actual competition.

I’d taken a couple of rifles with me and I found the facilities to be excellent and the HD monitors gave a crisp, clear image of the targets and each shot was clearly visible. Zeroing here is an absolute pleasure, you’re out of the wind and rain, shooting from a rock-steady timber bench and a comfortable stool. Using this range, you’d be able to get spot-on zeroes at 50- or 100-metres, in almost wind-free conditions – I think it would need a hurricane to occur to have any effect on your zero and the mounds really do their job, as well as deflecting sound up and away from the local houses. All in all, the Silverstone Shooting Centre (SSC) is an absolutely fantastic facility but if you want a break from shooting, you can always try your hand at archery, axe throwing or off road buggy driving on the purpose made course!

There are three classes of membership:

Gold: £650 per year This gives unlimited access to all the ranges on the days the range is open, with no extra range fees to pay per visit.

This provides unlimited access to the ranges midweek with no extra fees. Weekend use is chargeable at the standard hourly rate.

This provides access to the ranges mid-week at £10 per hour, £20 at the weekend. A maximum of two members can share the range.

This is for access to the range at £10 per hour per lane, maximum two members per lane.

This allows people who do not have a Firearm Certificate (FAC) to take part in an onsite training scheme. All safety equipment and firearms safety training is included using a club rifle and once completed allows the new shooter to use the facilities and apply for an FAC. This is a great system and I can see it being popular; contact John for further details and cost.

All of the ranges are available for commercial and club bookings; prices vary depending on when they are going to be used but start at £30 per lane 10am-1pm and 2pm-5pm. For more options and details, have a look at the website.

John offers secure firearms storage in state of the art humidity and temperature controlled conditions; everything is alarmed and linked to the local police station. Price is £10 per gun per month.

SSC also offer half or full corporate days using fullbore rifles in calibres such .22, .223 and .308, along with the axe throwing and off road driving on the high-speed track if required. The day can be tailor-made to individual requirements for team building etc. Once again, contact John for details.

Well, as you can tell, I’m very impressed by the Silverstone Shooting Centre; I’m also very impressed by John Thorne and his dogged determination! The facilities are unique in what they offer and there’s a package suitable for pretty much everyone, from the casual user to those who will be there every day they’re open. The possibilities are endless and I’m sure that John has a real success on his hands. It won’t be for everybody, of course, nothing is, and a lot depends on where you are in the UK. However, it’s fairly central and not far from the M1 and M40 motorways; I can see minibuses full of rifle club members making their way there for the day, as well as individuals from all over the country. All manner of competitions can be run on the ranges and I’m sure John and the team will be kept very busy from now on.