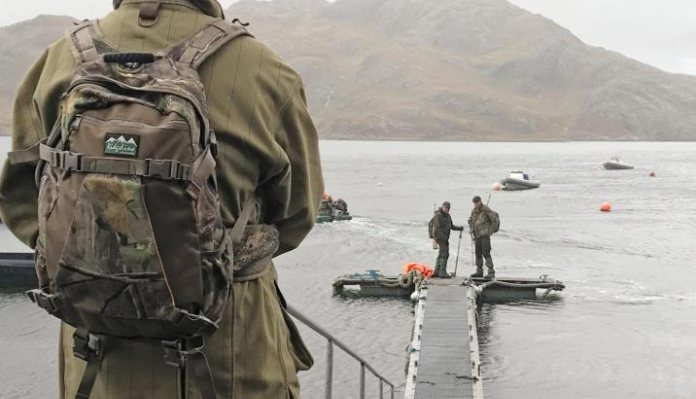 The one certainty that exists within the Royal Marines is that eventually you will have to leave, whether that is of your own choice at the end of a career or through a medical discharge. The challenge I simple and brutal; what do I do next?

Royal Marines are rigorously selected, highly trained, motivated and adaptable, this combined with an affinity and experience within the wilderness means they have transferable skills and value to add to the rural sector. My journey started with a keen interest and passion in the countryside, it was my ambition to transition into the rural sector, initially within the game keeping industry.

This started with Caerhays Castle Estate; pheasant shoot in Cornwall. The owner, Charles Williams and head keeper, Phil Tidball graciously accepted my request to assist me in gaining education and experience. Due to constantly moving around the globe, gaining access to the countryside and building relationships with landowners is often very difficult for soldiers. Having served 25 years, this was the first opportunity I had to be able to commit to civilian career development due to previous deployments. They took me on and allowed me to conduct a few years work experience as an apprentice keeper; probably one of the oldest!

Lessons were learnt, amongst them we Marines do not hold the preserve on physical hard work and hardships. Keepers are strong, fit people who work in the harsh conditions whilst maintaining a passion and dedication for their job, what better environment for any former Royal? It also taught me just how difficult securing employment into the field sports, land and wildlife sectors is. A combination of hard skills, knowledge, experience and most importantly trust is needed to be competitive as a prospective employee.

Our transferable skills weren’t going to be enough, so, professional development and experience was needed. If this could be achieved whilst still serving, maximising their limited spare time, the transition to the rural sector would be easier. This Inspired me to develop Project Artemis Royal Marines. It seeks to bring together the whole family, including serving personal, veterans, wounded, injured and sick to professionally develop and gain experience within the countryside sector with the ambition to find jobs and a future life.

Upskill: educate and train the novice in a range of land and wildlife functions from novice leading to competent levels following best practice and procedures. Focusing on how game keeping etc fits in with ethical, ecological land and wildlife management.

Deliver careers development: move the individual from the competent to a professional level with the correct skills and experience. Recovery activity: for wounded, injured and sick, which can range from adaptive shooting, respite breaks, fishing, conservation projects and any other work that is adaptable and appropriate. Additionally, the project seeks to raise the profile and influence of the Royal Marines Association and Charity, who are so vital to the providing life support to all our people, serving or not. With the aims and ambitions set for Project Artemis, support from the rural sector was sought to conduct further work experience on a larger scale.

The Ardnamurchan Estate on the West Coast of Scotland and West Highland Hunting was approached with the request to support training and professional development as deer guides. The response was tremendous, we couldn’t have found a better organisation and people to show us the way. An initial scoping plan with Owner (Donald Housten) Manager (William Kelly) and the Game Manager (Niall Rowentree) on how the training and work experience could be delivered was conducted. Followed by a season of rehearsing this on a small scale with two Marines.

This led to the inaugural season in 2019 as deer stalking trainees on the Ardnamurchan Estate with West Highland Hunting. With training from Niall Rowentree and Steve Grant, Marines have been utilised as Ghillies, October through to November. The tasks and education have been multi-faceted, ranging from stalking, carcass extraction, marksmanship, gralloching and larder skills etc.

Linked to the land

Most importantly is the knowledge and education on how deer management is intrinsically linked to the complex issue of land and wildlife management as a whole. Leading to one of the most crucial lessons of all, correct species identification and selection for culling, ensuring that the correct animals are removed to support a higher land and conservation vision, in an ethical and justified manner.

Many of the skills being learnt are strikingly similar to the function of a Marine in combat, not only are they developing essential skills to transition into the rural sector. We are also enhancing our core combat skills such as marksmanship, weapon handling, physical fitness, endurance, navigation, risk analyses, leadership and fieldcraft, to name a few.

Thanks to the Ardnamurchan Estate and West Highland Hunting, Royal Marines are being trained and mentored by professional deer stalkers and as is often the case, history is repeating itself. The very ground that Project Artemis personal are learning on today is the same used in 1940 to 1945 during World War 2 by aspiring Commandos. When the Nation was at its darkest hour, Churchill decreed: “Enterprises must be prepared, with specially-trained troops of the hunter class, who can develop a reign of terror down these coasts, first of all on the ‘butcher and bolt’ policy”, Churchill needed men to take the fight back to Axis forces and so the Commandos were born.

They were trained in the West Coast of Scotland, from Lochailort, Ardnamurchan, Ardnish to Achnacarry and as the inscription on the imposing Commando Memorial at Spean Bridge states: “This country was their training ground.” So, after 75 years, they are, once again being trained on the very ground and by the same communities our forefathers were. The West Highland Commando renaissance has begun. In summary, Project Artemis Royal Marines is all about one thing: “Re-connecting Royal Marines with the countryside they serve!”

As an ex solider myself who served for 10-years in the Army in the 1970s, I too faced the same transition from an extended family that looks after your every need and also puts you in harm’s way, to walking into a new and demanding world, where being an ex-squaddie cuts little ice with the civilian community. I was lucky, as through the then Joint Services Recruitment Programme, I got a job with the Met Police D11 firearms section as an armourer, then the BBC as a property armourer, where I taught actors to use guns of all types, archery kit and even sword fighting, which set me on my new career that ended up with me running various shooting magazines. I’m very pro the British Forces and always donate money, as I feel these men and women deserve our help and respect, as it seems they don’t get that or the support they should. Last year in Scotland I met two guys from something called Project Artemis, which turned out to be a Royal Marine initiative to train serving members and those invalided out or discharged, in the country pursuits, with a view to future employment. I contacted WO1 Steve Tompkins whose idea it was, and he’s kindly put pen to paper.