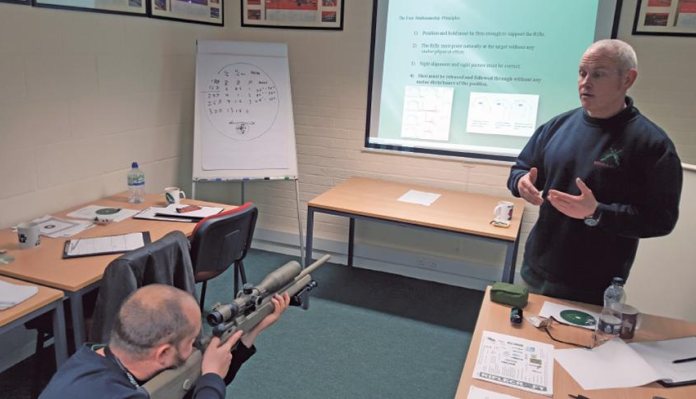 As a strong advocate for further training, I have a huge thirst for knowledge, especially when it involves shooting. It seems that each time I attend a course, subject matter I didn’t realise even existed pops up and I get to learn something new! The kit we use and the techniques taught are always getting updated, so looking at available training courses is a good idea.

I recently jumped at the chance when I was invited to attend a Module 1 training course at Riflecraft. This particular module has been described as ‘the minimum level of knowledge that should be displayed by all firearms certificate holders’ and was created by Andrew (the owner of Riflecraft) to fill a gap in the market. At the time, there was very little on offer, if anything at all! I can tell you right now that I learnt plenty!

In advance of attending the module, a pretty thorough set of joining instructions are sent out to the students. These detailed the schedule for the weekend and I found they answered any questions that I might have had.

Upon arrival, we were shown the purpose-built classroom, where we would be spending most of the day. We were introduced to our instructors, who advised us of their credentials, which included plenty of military and civilian experience, both on the range and out in the field.

They went over the aim of the course and the brief format that it would be taking. As a student, we each got the opportunity to introduce ourselves, to detail our level of experience and what we hoped to gain from the course. One of the key objectives that I liked was ‘to make us better armed to make decisions’. These could vary from what rifle to buy and what ammunition should be used? To the other end of the spectrum: is it safe to take the shot or is that a suitable backstop?

As you would expect, we started with safety, initially discussing topics ranging from backstops, safety areas and preparing for the unexpected. You never know when an of-course rambler is suddenly going to appear out of nowhere! I can’t list everything that we learned but I can say that I was impressed, as a whole multitude of topics regarding safety were covered, such as handling, security etc. and the stories that we were told of when safety issues had arisen helped to reinforce the subject matter discussed. When talking about barrel obstructions, we were given the opportunity to have a look at a rifle, or in fact what was left of one, after it had been fired with a blocked bore. The damage caused was certainly an eye opener!

I found that the tea breaks between each subject offered a good opportunity to discuss things as the day went on and the use of a projector and slides in the classroom made the information easy to digest. The lessons were well paced and there were plenty of opportunities for questions. It was almost as if Riflecraft have been doing these classes for more than a decade; 12-years in fact!

The format of the day followed this trend and we covered a wide range of subjects including equipment requirements, rifles, sighting systems, accessories and the different types of ammunition. The judging distance lesson gave us the opportunity to talk about a variety of techniques, just in case a range finder was not to hand! Elementary ballistics, zeroing, rifle maintenance and marksmanship were also covered. Bear in mind that each lesson was around 45-minutes, so there was a lot of information.

We had a practical demonstration when it came down to maintenance and this part of the course was of great interest to me, as there is a lot of misinformation out there. I was happy to hear some advice from someone who has seen literally thousands of rifles at their various stages of wear and tear. We talked about products and the techniques that would allow us to make the most of them, as well as the dos and don’ts. I personally took away a lot from this lesson. The other practical class was marksmanship, where we were shown the various shooting positions, including prone, kneeling and sitting with and without sticks. These skills were ones that we would be able to put into practice on the range in day two. Only after we completed a quick written test on what we had be taught so far though!

Riflecraft not only has its own 100-metre range but also has everything that you need, so you can either bring your own rifle or you can borrow one of theirs. They don’t offer up shabby old rifles either, with two very nice, worked up Remington 700s on offer, with optics to match. The purpose of the day was to put into practice what we had learnt on the first day of the course and after a safety briefing we got down to zeroing!

This process gave both the instructors the chance to watch each of us and to analyse what I shall describe as our firing cycle. This is the process that starts once you are in position and ready to take the shot and includes aspects such as the position of your hands/grip, trigger finger position, eye relief and very importantly breathing and trigger control. I cannot stress how advantageous I found this process to my shooting, as differing techniques were suggested and after practice they have had a very positive effect on my shooting. It is this firing cycle where bad habits creep in and it can be very hard to diagnose these without help from an instructor, no matter how experienced you are.

Whilst practising our firing cycle, the practical task of adjusting windage and elevation was also discussed. We were taught how to zero the rifle in the most efficient manner, whilst also discussing troubleshooting methods. These included the process of ‘shooting the box’ to make sure the scope was mounted level, as well as seeing if it was tracking correctly. Once everyone was sorted, we were taken through the various shooting positions, whilst discussing their pros and cons and limitations. After shooting from each position I soon learnt mine, so more practice required!

The test was simple – we would fire six shots in our own time from either the bench or prone position at 100-metres. All needing to be inside a four-inch circle; pretty generous seeing as most modern rifles are capable of shooting one-inch straight out of the box! I was pretty confident this wouldn’t be a problem and took my shots seated. It wasn’t long until I was ready for the next. It is worth noting that failure to complete this phase meant you couldn’t move onto the next one! However, you do get a total of three goes to use up throughout the entire test.

The next phase is to fire two shots into a six-inch square target from 75-metres using either the kneeling or sitting position whilst using sticks as a support. Getting the shots into the zone was fine but quickly and easily getting into a comfortable position and staying there was difficult for me. I certainly needed to practice getting into the sitting position and shooting from it a lot more. Last but not least we had to fire two shots from a standing position whilst using sticks at 40-metres into six-inch square. We all agreed this was a very generously sized target, maybe a bit too generous! Andrew stressed that they liked to try and get students consistently grouping in a target area at least half that size. The day ended with us all completing and passing the test, which was both good and a relief!

Having gone into this module with a reasonable level of knowledge, I was impressed with the quality of the content covered and am of the opinion that it was well thought out. It certainly offered the minimum level of knowledge that should be displayed by all firearms certificate holders, whilst also offering the opportunity to advance from there. Critically for me, the lessons took place in an enthusiastic and fun learning environment, which is very important!

There was no limit to the number of questions that could be asked and there were ample opportunities given to debunk myths and to have a critical eye cast over your shooting and techniques you employ.

I have no hesitation in recommending this course to current licence holders and especially to anyone looking at getting a firearms certificate for the first time. You will leave better armed to make better decisions and you will probably shoot better too! There has been chat about a practical rimfire course, so keep your eyes peeled and ears pricked for that one. I for one will be signing up for that straight away!