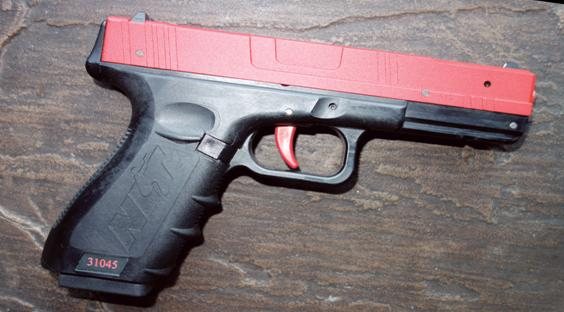 Police firearms units, military personnel etc. all have to be proficient in the use of the weapons they carry, but often there is a limited amount of training between annual qualification days.

Range-time obviously costs, both monetarily and time-wise, ammo also has to factored in, so it’s hardly surprising that a couple of armed police officers I know have often moaned about their lack of practice. Armed officers are needed on duty and if there’s any sort of incident or terror alert, officers are deployed as required and any scheduled training goes out the window.

I used to frequent a rifle and pistol range where off-duty police officers shot in the evenings and at weekends; they used to enjoy it but more importantly, it gave them more shooting time, using the same type of pistols that they carried whilst on duty. That all stopped of course, when the government of the day decided that law-abiding citizens, even police officers, could no longer be trusted to own and use handguns. That worked well then…

Being proficient with any firearm really requires constant practice, pistols must almost become an extension of the person using them and if there’s limited range time those who use them can lack the confidence and abilities to use them when needed. Fine motor skills need constant repetition, so it’s no surprise then that dry fire practice is a very good way to keep a user’s skill levels high, even without firing a shot.

The main essentials when it comes to pistol shooting are grip, sight alignment, sight picture, trigger control and follow through. If the pistols used by the officer are locked in the armoury and unavailable, he or she obviously can’t dry fire their weapon and even if they could, it could possibly end in a negligent discharge should a live round end up where it shouldn’t! Even if the pistol was available, the slide would need to be pulled back each time to re-set the trigger, meaning the firer’s grip would have to be altered each time and it would hardly simulate the real thing.

This is where Mike Hughes from Next Level Training comes in! Mike developed a dummy pistol that could be used for training, but was completely inert and could never fire a live round because it simply can’t chamber one, therefore there’s no way any accidents can happen – very reassuring for all involved, I’m sure.

Mike was obviously wellaware of the large number of Glock pistols used by the police, military and civilians, so it was logical to design his training pistol around the Austrian masterpiece. He worked with Glock to ensure that he wouldn’t be breaking any laws regarding their design and intellectual property but the training pistol is still a very familiar shape, with the same type of overall styling, sights, mag release etc. Anyone familiar with a Glock can simply pick up the training pistol and feel at ease with it. The ‘pistol’ weighs 1lb 5½oz, so not quite as heavy as the real thing but a good weight none-the-less. The training pistol even has a rail on the front of the frame, so that people can practice with any lights they may use on their real weapon; it also fits the same holsters as the real deal, so no more accessories need to be bought. Construction is polymer, but there’s a steel slide model available at extra cost. The slide is either red or purple, so there’s no mistaking the units for a real firearm. The dummy magazine is weighted, so that it drops free when the mag catch is pressed; this allows drills to be realistic and the weights can be altered to mimic a half empty mag too.

It’s even possible to fit different front and rear sights, so the ability is there to tailor the training pistol to be a very good mimic of the firearm the user normally carries.

The heart of the pistol is the trigger unit of course, or as the company call it, the Shot Indicating Resetting Trigger, hence the SIRT name. The user’s finger should obviously be outside of the trigger guard until the weapon is about to be fired, so if an instructor sees a red dot coming from anyone’s pistol when it shouldn’t, the necessary telling off can be issued. When the first stage of the trigger is engaged, the take up laser is activated and shines on the target, when the trigger is pressed to ‘fire’ the pistol, a second beam is emitted, either red or green, depending on the model. This indicates where the shot would have landed. The trigger pressure is then released, which re-sets the mechanism. Ideally, the user should keep slight pressure on the trigger, so that the trigger re-sets without the first laser going out. Power for the two lasers comes from a Lithium battery in the top part of the frame and it is accessed by drifting out a couple of pins and lifting the slide upwards. The battery is going to last for a very long time though, so it’s not something that will have to be done too often. An instructor initially and then the user on their own can then see if the shot is being ‘snatched’ left or right, up or down without any bullets travelling downrange. The user can therefore achieve a consistent, correct trigger pull. New recruits could learn all the basics of sight picture, trigger control etc. before even handling a real firearm, so that when they later transition to the real thing they would have the first principals sorted. Officers could have them at work, or even at home, so they could get some ‘trigger time’ without having access to a lethal weapon.

Also, because nothing is fired, such as a BB or paint marking simuntion, no goggles or any other protective equipment is needed when practicing.

The overall feel of the SIRT pistol is very good and I can see those who use a Glock as a duty firearm would be right at home with one of these clever little devices. I’m obviously not an armed copper but I can see the benefit of one of these units; you could have it in the office, home or anywhere really, it’s not in any way dangerous, doesn’t need to be kept under lock and key and could be available for dry fire practice at any time. There’s even a dummy bolt for AR15s and this allows users to dry fire these rifles and carbines in a realistic manner.

There are various add-ons available for this system that can take training to another level and I’ll detail these in another article. All in all, a very interesting system, with many potential users.

The SIRT pistols are distributed by Sentinel Shield and my thanks must go to Alan and Tim for allowing me to try out these interesting items.
For more
details and pricing, go to www.sentinel-shield.com, email [email protected] or phone 01481 823 994.