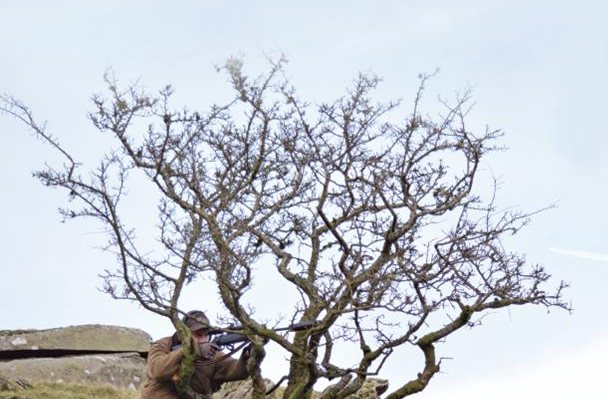 I make no bones about the fact that WMS Firearms Training in Wales is my no.1 UK destination for seriously working out the ability of a gun and shooter. I love the challenge of making ‘the shot’ count. Although their current facilities are extensive, Andrew Venables has whispered a few rumours to me over recent months about an extra new location and over the 2015 Christmas holidays, I was invited to go and see them for myself as they are coming online.

Nearly all field shooting locations that are likely to see a lot of ammo go down range need to be moderately remote, safe to shoot in for definite bullet capture and the amount of noise generated. It’s always a compromise and there is usually one “it’s great but” drawback, yet after a whole day at what has been termed the “Wilderness shooting area”, the usual But was replaced with a Wow, it is awesome.

Although I shoot a lot of big rifles in large and exciting calibres, my personal pleasure is using a stalking rifle to make the shots count no matter what conditions are faced. We set out from WMS HQ in the Polaris carrying only hunting kit, no spotting scopes, just two rifles, ammo and a pair of range-finding binos, with no specific plan other than to enjoy ourselves.

The venue is only actually about 20 minutes’ drive and follows a road from the local village shop all the way up into the remote hills of the Elan valley, among thousands of acres of wilderness. In fact, it’s one of the most remote spots in the UK, yet not actually that far from civilisation, with easy access along forestry roads which at this time of year were empty other than for a few hardcore green laners enjoying their Land Rover convoy en-route to endless boggy roads some further miles ahead.

The ascent rises through a valley surrounded by the glacial moraine and when you are almost at the top, a great amphitheatre of hill and forest opens out into a huge semi-circular bowl at the top. This surrounds a disused but very cosy farmhouse that forms the base or hub of this new wilderness. Although deserted in the 50s, it is still well-roofed and bone-dry inside, with several outer barns and hard standing to park vehicles. The barns will soon offer solid shooting positions more akin to a regular range.

But this was not how I was first introduced to the location, Andrew likes to be the showman sometimes and we began shooting after driving directly up the steep centre mound of this bowl that rises above the farmhouse; it offers over 250-degrees of safe firing arc into the hillside both up the valley and also broadly to the left and right into both descending and ascending slopes. Bumpy organic topography allows both limitless target and shooting locations, but also the ability to choose your wind-direction and practice judging both wind strength, direction and also, the bumps you get in shot elevation as the air flows over the landscape.

The bowl is nearly 2000 metres across and within, say, 1000 metres, you could happily lose 500 steel targets; and when I say ‘lose’, I really mean it! Incidentally, WMS supply their own-specification, fully hardened steel targets in both discs and figure 11 shapes, as well as animal silhouettes to both sporting and military users worldwide.

If you imagine a hollow doughnut, that’s not far wrong from the space on offer and that has clear line-of-sight at any range. When allowed to rest outdoors, it is amazing how those unsprayed targets form a layer of surface rust to blend them into the landscape. This also has the effect of being self-repairing and at 10-5mm thick, no chance they will either rust away or allow a bullet of anything up to 50 cal. to penetrate.

We started out spotting targets, and it was good practice to learn as a pair to call in targets, walking the shooter’s eye across the landscape and talking them into position with description of the foliage, ground conditions, topographical shapes and remnants of old stone walls. Finding your first one is very difficult when Andrew tells you, often like a stalker with a well-earned eye for the landscape: “There is a roe deer 350 metres away in that direction,” as he points a finger. When you find the first target the scale of the whole area seems to click into perspective – it is massive and a life-sized roe soon pops out, followed by many more targets in your known arcs of fire at various distances that are now set into proportion when your brain adapts to the scale of the field of view.

We shot from 600 metres at the first target and both ran out of elevation adjustment on our similar Swarovski riflescopes, but these are sporting rigs, not tactical units with huge envelopes of adjustability. Andrew had taken the opportunity to get a little personal trigger time and choosing to take a Blaser R8 which, in 6.5x55, ballistically mirrored my Mauser M12.

Wind required over 30 1cm clicks to accommodate for and still needed a little `Kentucky` holdover to make shots in very windy conditions gusting into the 20-30kph zone but similar ballistics allowed us to tally results together well for great coordination.

The Game Is Afoot

After a break for a picnic lunch, we left the safe carriage of the Polaris and bipod shooting, to head for the hills on foot. A fairly obvious pathway circles the inner mound of the valley from below and a second ridgeline does a similar job 800 metres higher up, and it’s these that are really magic. The inner mound allows your nowzeroed and checked rifle to be shot from improvised positions; sitting kneeling and leaning into trees, off rocks and branches of all descriptions. You learn to look and quickly visualise your likely preferred shooting approach to a rest of this kind. I took a shot from a very spindly tree only half-anchored into a rock face on a recent stalking trip to Scotland and although my stalker shuddered in fear at the visuals of the attempt, I felt quite relaxed and comfortable taking a valuable shot from a position I had practiced from many times.

There is the availability of water and boggy bullet impact signature on some of the shots and there are a million and one rocks to offer spotter options as well as steel targets. Taking long shots standing or sitting from quad sticks is becoming a fantastic string to my bow and one in which I have great confidence because of opportunities to practice like this in a real hunting environment. The short winter daylight limited our time but a longer day would have allowed us to walk the ridgeline and work on new shot angles, wind angles and terrain.

The simple fact is that you just cannot utilise this in a single day and I’m certainly not likely to get bored here with so much variety of testing shots on offer. A true training facility to stretch your ability on any target at long ranges is always sensible, as it deepens the quality and reliability of your close range real hunting shots.