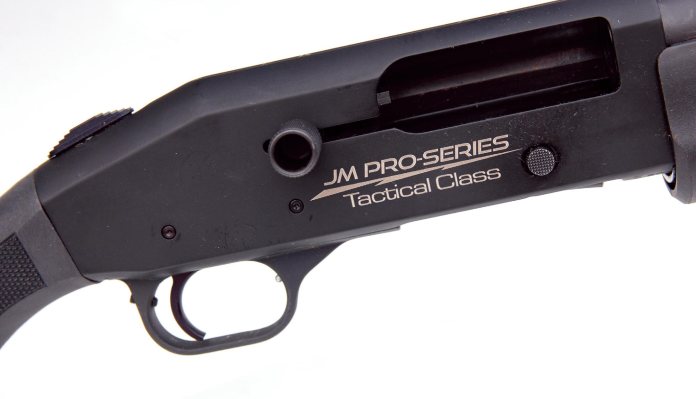 Mossberg has been around the firearms industry for close on a century, having been founded by Swedish-born Oscar Frederick Mossberg who immigrated to the USA in 1886 and began manufacturing firearms 33 years later. The marque has a long association with pump-actions, with the now legendary 500 series in production since 1961. The 930 is more modern, although it uses proven, gas/piston technology.

The 930 looks pretty much like most other camo-finished autos on the market, synthetic stocked for lightness and resistance to the elements, it feels quite light and wieldy. The waterfowl camo pattern looked good, though the cutting and finishing of the overlay was a little untidy around the edges. However, you don’t buy a gun like this to put on your wall! The Mossberg is a workhorse and is priced accordingly. It does though have a few features that make it stand out from the crowd.

The Mossberg uses a gas/ piston system though being designed primarily as a duck gun it seems well thought out with a minimum of parts that might become clogged by fouling or mud. Cleaning was straightforward enough and it seemed happy to cycle a good variety of hot 28g loads on the clay ground while bigger shells right up to Magnum proved to function without any drama as you’d expect.

If the Gun Fits…

One of the first things that stand out is that it actually fitted me very well straight off the shelf. Most autos have a low comb that tends to make them rather flat shooting but the Mossberg gave me a good view down the rib, while the stock length at just over 14 inches was perhaps a little on the short side, but nothing that should prove a major problem to most users. For further adjustment there are a selection of shims supplied which should be enough to match most frames.

Purchase was good, the close radius grip giving plenty of control while the thick recoil pad didn’t seem to snag on clothing when going into the mount. The forend is chunky and feels similar to that found on that other great American auto, the Remington 1100! Though there was a little play at the rear where it joined the receiver, something quite common on budget-priced autos.

One of the good features of the 930 is its tang-mounted safety, as opposed to the trigger guard mounted cross-bolt usually found on most autos. This is a far more user-friendly approach, allowing an easy push off of the safety as the gun is mounted. The button is chunky with several large ribs across it which should allow ease of use even when wearing gloves. Another unusual feature was a ‘gun cocked’ indicator on the inside of the trigger guard. This small ‘nipple’ pops out to indicate that the gun is ready to fire, although I can see that it may be useful if using lighter loads to indicate if the gun hasn’t cycled properly. I would imagine it would be rather difficult to feel with heavy gloves on, yet still it does represent a neat piece of engineering.

Also supplied was a fluorescent orange breech plug to indicate the gun is safe, a useful thing when carrying it on the clay ground. But it’s really quite small and chances are it wouldn’t last long before getting lost. As with all American guns a trigger lock is supplied to comply with US law, and although it’s not a requisite in the UK it’s a useful thing to have especially when in transit.

The 28 inch barrel is Magnumproofed to take everything a three inch shell can throw at it, though it manages to do all that without feeling overly muzzle heavy which was a pleasant surprise. Fitted with a 10mm rib and fibre optic bead for low light it ticks all the boxes and the supporting posts look suitably rugged enough to cope with the toughest use.

Don’t expect back boring or fancy forcing cones here, it’s a simple straightforward bit of engineering, but don’t let that put you off as the gun seemed to pattern very well through the accu chokes, three of which are supplied. One thing that gives away the gun’s American roots is the barrel porting, 16 having been drilled a few inches back from the muzzle. Generally speaking I’m not convinced that these help a great deal at reducing recoil when using standard loads though I’m sure they come into their own on the larger three inch shells.

For a gun that’s sold primarily as a wildfowler the Mossberg 930 felt quite at home on the clay range; balance was on the whole very good, not feeling too front-heavy despite the lightweight synthetic furniture. Quick direction changes were straightforward enough and the high comb made it feel much more like something I could get used to very quickly. Using the top safety soon became automatic, while it seemed happy to perform on a mixed diet of clay shells though in all fairness 21 and 24g loads are not something that it was capable of consistently cycling and therefore I would recommend sticking to 28g and heavier.

Once again, as an auto it needs to be driven hard on longer targets, that lightweight making it easy to stop the gun if you’re not careful, but it was able to dispatch everything that Wylye Valley Shooting Ground had to offer. Recoil was minimal even when using the punchiest of clay loads and second and third follow up shots were easy to make without any undue amounts of muzzle flip.

The US shotgun industry is somewhat different to Europe’s, partly due to the nature of the consumers in that practicality and effectiveness are their prime buying considerations and not so much aesthetics or the finest level of finishing. Consequently guns like this Mossberg and others like it are produced in huge numbers which for the buying public on both sides of the pond means low prices and for the money the Mossberg certainly delivers the goods. It feels good in the shoulder, shot surprisingly well and will undoubtedly do many years of faithful service either in the pigeon hide or out on the foreshore. If you’re looking for a gun of this type then it would be foolish not to consider the 930 GM