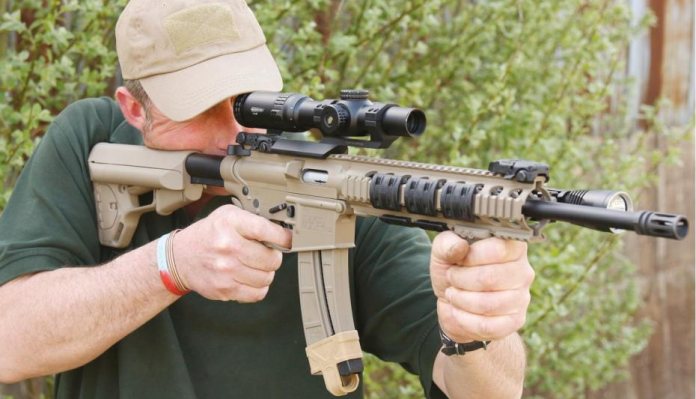 It’s rare these days to get anything truly original or unique to the marketplace, as most ideas have been achieved and just remodified in some way. Sometimes you get a bit of both and with firearms ammunition anything new is always of interest, especially when its concerning probably the most popular, small game cartridge on the planet, the .22 Long Rifle (LR).

One of the best

There are plenty of manufacturers of Rimfire fodder these days, but CCI is consistently up there with the best, with the sheer volume of production and variety of ammunition types offered today. An earlier innovation was their Segmented 22 LR sub-sonic; here, the bullet is designed to break up into smaller fragments to increase lethality and knock down ability. It certainly worked. More up to date, is the subject of this test. We keep hearing about lead free this and that, which is not always helpful to us, but this new advancement is meant to help the shooter! CCI’s new Clean-22 rimfire ammunition.

Let’s face it the humble 22LR does have a reputation for being a dirty little number. Apart from powder residue and general fouling, which is the bane of some semi-auto rifles, as the gunk tends to build up in nooks and crannies like extractor pockets, bolt rails and trigger mechanisms. The other consideration is bits of bullet materials being shaved off as the cartridge is fed from the magazine and into the chamber, also adding to the problem.

It is available in both high (HV) and sub-sonic (subs) velocities in CCI’s normal, long 100 round plastic boxes. The difference is that the Clean-22 uses a new, polymercoated bullet that is reported to reduce copper and lead build up in your barrel and chamber area. Thus, reducing the overall amount of residue deposited in these regions, that have always plagued Rimfire users. It will also reduce the dreaded lead build up that seems to accumulate in sound moderators that ultimately affects accuracy. It is said that these new bullets reduce the lead deposits from 60 to 80%, not bad!

Another benefit is that the total encapsulation of the bullet will reduce the amount of lead that comes into contact with your skin when handling the ammunition; for example, when loading the magazine. My only reservation is the bullets on both the sub-sonic and HV types of Clean-22 are a simple, solid round nose configuration. Let’s face it, if we are hunting with a 22 Rimfire of any type, a hollow point is what we need for maximum terminal performance and knock down.

I primarily hunt, so these new Clean-22 ammo is doubtless aimed more towards your target and semi-automatic rifle shooters, where volume of shots is more prevalent. That’s not to say you cannot use a good round nosed rimfire for vermin; you can, but it will over penetrate, so beware. That aside, what a really good idea to help the shooter achieve peak performance in their rimfire rifles. The HV Clean-22 is defined by its red polymer coating and the sub-sonic by its Blue tipped bullet, You can see that the sub-sonic bullet along its path only loses 155 fps velocity from muzzle to 100 yards, drifts less in the wind than the HV that loses over twice as much velocity at 243 fps! That’s why I really like big calibre subs like the 338 Whisper, same principle. So, in other words unless a small amount of extra ft/lbs and less drop down range is an issue, I still really like the CCI Subs Clean-22, as accuracy and wind drift are superior.

I tested the CCI ammunition in a variety of rimfire rifles both old and new, bolt action and semi- automatic to assess the function, accuracy and velocity of each. Cleanliness wise, it is quite hard to ascertain overall performance, as a long-term test is really more suited to this. Also, with a 22 Rimfire, the barrel does need to be cleaned and will often shoot a lot better when a few fouling shots have `conditioned` the bore. So, it would be interesting to see how many rounds from a clean and then a normal fouled bore it would take to achieve best or consistent accuracy.

No need to section these bullets to see the inner design as they were solid round nosed with no cavities just uniform lead. The coatings were a bit different though; the red polymer was thinner, and the blue looked thicker and was more evenly applied. This could just be a batch thing, regardless, it made no difference to performance. With around 200 fps of velocity between the two ammunition offerings, it’s reasonably safe to assume that the coatings are not 100% identical in composition as to the effect they offer. I’d guess the high velocity goop is more tenacious for obvious reasons.

I also took the Sako and thoroughly cleaned the barrel to bare metal and then shot 50 rounds of each HV and Subs, to see how many rounds it took to achieve best group size. Normally, the Sako will take at least 20 or so normally lubed rounds to run the bore in again to get best accuracy. I normally leave the barrel on this gun alone but give it a good clean if I notice accuracy dropping off.

The CCI HV took 15-rounds to get its best groups and then after a another clean the subs took only 11-rounds. Also, when you shoot either load through an already leaded barrel, it does take at least 10-15 rounds to ‘condition’ it to suit the new CCI coating.

Looking down the bore with the Hawk Eye Bore Scope did reveal that the coating of the new Clean CCI did indeed leave less visible traces of fouling to the lands and in the grooves of the rifling. You also had quite a clean burn of the powder too, with not too much unburnt residue left, unlike most 22 Rimfire ammunition. Obviously, each barrel is different, and you will need to determine the merits of the coatings on these rounds in your own individual rifle. From a safety issue, less lead contact with hands and lead to the atmosphere is a very good idea indeed and is beneficial to all shooters. As to whether it deposits less lead into a suppressor, you would need to shoot a lot of ammo to determine this, but from the tests and fouling results, I would say less would occur.

I can see these new CCI Clean ammunition rimfire loads doing very well for gallery and target shooters in particular. Their round nose configuration is a little more limited for vermin use though. Plus, the coating might not be conducive to food hygiene either. However, and as I said the nonexpanding configuration would probably not be a choice for 99% of small game shooters. Accuracy for the three test rifles was good with the Sub-sonic loads achieving better accuracy and down range performance, as expected, due to the less turbulence achieved by being subsonic for its entire trajectory, unlike the HV version. Another good introduction into the world of rimfire ammunition from one of the best ammunition makers.