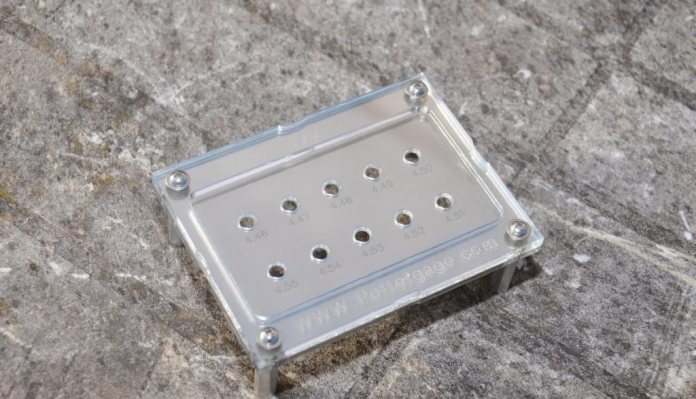 For those airgunners who wish to fight it out on the competition circuit, or maximize accuracy and performance, weighing sizing and grading pellets is clearly the way to go. An increasing number of accessories are now aimed at the dedicated shooter, that wants to go that extra mile, and with the weakest link so often the ammunition we use, it has to make sense to focus some attention on this area. The ‘PelletGage’ hails from America - hence the spelling and the main body plate measures a highly portable 4 x 3”. The top is a plastic plate with oversized holes, which then guide the pellet into the aperture beneath, cut into a metal plate. Holes are precisely cut by laser, and the idea is that the shooter is able to sort pellets to within 0.01mm; telling if the head size is anything between 4.46mm right through to 4.55mm. Drop a pellet head-first into the 4.53mm hole for example, and if it drops straight through, then you know it’s smaller, so the next size down is tried and so on.