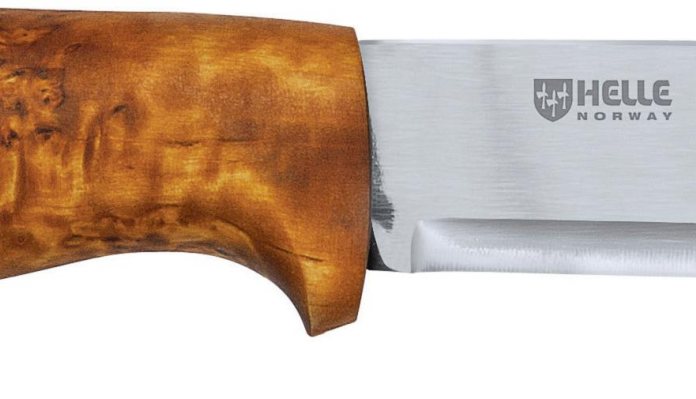 Manufactured in Norway, Helle has a 70 year+ history and amazingly it takes up to 45 different manual procedures to complete a single knife. So, as you can imagine, Helle design field cutlery to withstand all the challenges that a hunting knife can face.

The two blades featured use the company’s patented triple Laminated Stainless Steel, due to its high level of edge retention and incredible strength. They’re of a full tang construction, have Curly Birch handles and come supplied with a genuine hand-stitched leather sheath with belt loops plus cleaning cloth.

As is often the case with this manufacturer, the handles are very ergonomic and after crafting give the overall look a high level of cosmetic appeal. Interestingly, although curly birch grows wild in Scandinavia, wild trees are apparently now relatively rare. The reason curly birch is used is due to its primary colour being light yellow and naturally, its pattern varies. Also, its wavy annual growth rings are what give the wood its distinctive patched brown curly wood cells.

Similar but not the same

Both knife handles are identical in base design and feel very good in the hold. It’s when shown side by side you clearly notice the difference in blade length and profile, as the Gaupe has a much deeper and slightly longer blade than the Fjellkniven. Also, the latter has a stainless steel insert/guard at the base of the blade where it enters the handle for added strength. On both models, the end of the tang can be seen to pass through the handle where it’s made into a small pommel. This is produced by it being hand-hammered over a brass retaining collar which results in extra blade security within the handle and increased overall rigidity.

As a matter of interest, Gaupe is the Norwegian word for Lynx and to compliment the moniker there’s a Lynx footprint embossed on the knife’s leather sheath. As is the way with the company ethos, Fjellkniven literally translates into Mountain Knife.

The Gaupe and Fjellkniven might well closely follow a similar design layout, both cosmetically and in build to other models already available in Helle’s very comprehensive range of sheath knives. However, they have their own individual handling characteristics, which in my opinion makes them well worthy of any hunter or outdoorsman’s consideration.

Another redeeming feature is that unlike other Helle models - which for certain hunting applications are too large - these particular fixed blades are what most UK hunters are used to and prefer to take into the field.